A Faster Breed of Cat 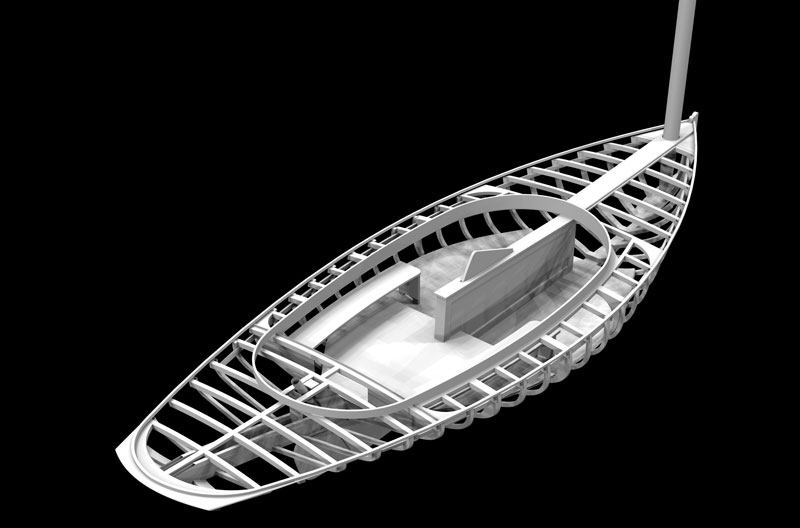 This computer rendering of the new boat is based in part on a laser scan of an old half model. Rendering courtesy Ezra Smith

Have you ever seen a really wonderful old photo and wished you could be in it? A new project under way at Artisan Boatworks in Rockport is intended to do just that for a customer in Rhode Island. Yarrow Thorne, an artist and innovator in Providence, has long admired an 1899 photo of his great-grandfather sailing a distinctive 21' shoal-draft, low-freeboard, gaff-rigged catboat, in which he circumnavigated Long Island. The catboat was designed and built by legendary builder Gilbert Monroe Smith. 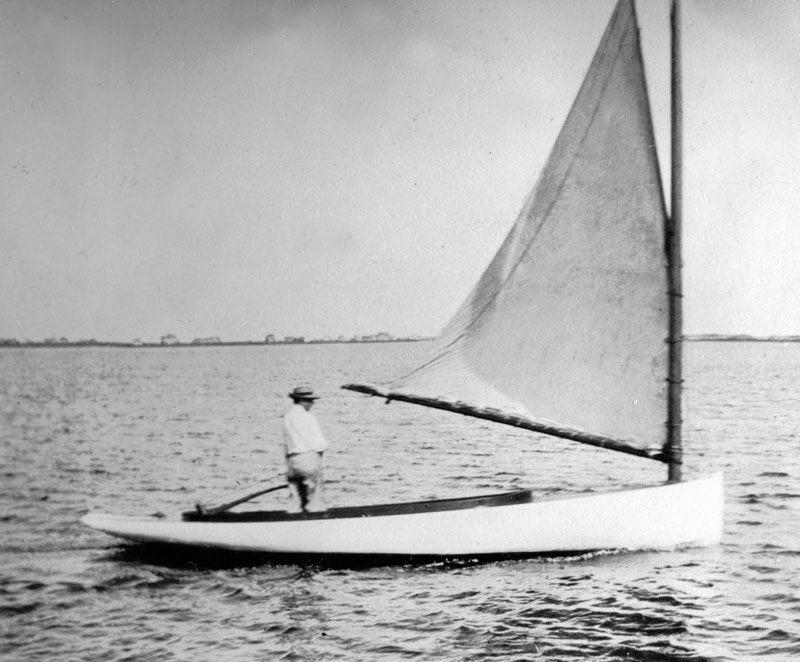 The owner was inspired by this photo of his great-grandfather Edward Delafield sailing Briseis, a Gilbert Smith catboat, in Quantuck Bay, Westhampton Beach, New York, in 1899. Photo courtesy Yarrow Thorne

Thorne wanted to transport himself into that 1899 photo of his great-grandfather and experience as authentically as possible what he experienced, while also drawing on new technology to make the new boat as practical as possible to maintain and sail.

Mention “catboat” to almost any sailor from New England and they will picture a beamy vessel, half as wide as it is long, with one large gaff-rigged sail, and a big rounded rudder hanging off the transom bearing against more air than water. Then there’s a set of variants, built by Smith, a long-lived master from Great South Bay, Long Island. Smith’s boats, built in Patchogue, were a whole different breed of cat.

As the team looked for a Gilbert Smith catboat to replicate they found drawings for Mariam in Rudder Magazine as well as Smith’s original hand-carved half model for Mariam, which was in the collection of the Suffolk County Historical Society in Riverhead, New York. Courtesy Yarrow Thorne (2) 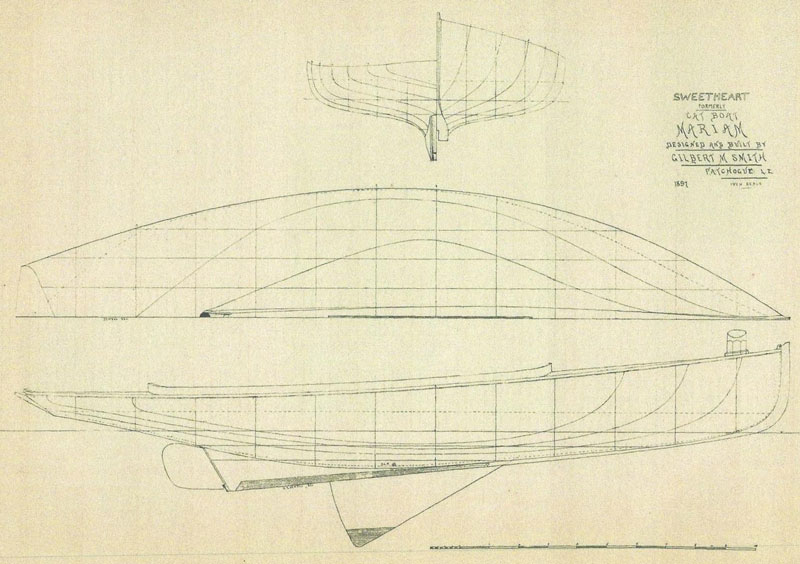 A designer of very fast catboats

When Smith began his boatbuilding career in 1876 he built inexpensive, shoal-draft boats for the oyster and clam tongers of Great South and Shinnecock Bays on Long Island. He placed the masts in his boats extremely far forward, and tucked the rudder under the counter, rather than hanging it off the stern. Also, unlike other catboats, the beam on Smith’s boats was narrow, less than half the length. The curved topside planks were thicker aft and carved to shape and the upper two strakes were longleaf yellow pine. The lowest point of the sheer was well aft so the waterman could haul aboard his heavy harvest handy to the tiller.

Shellfish don’t improve in the hot sun, and Smith’s were the fastest boats available to get a catch to the dock quickly. His boatshop had almost no competition and he worked 12-hour days to satisfy the demand.

About the time the Long Island Railroad reached the Hamptons, the local littleneck and oyster harvest declined, and rusticators arrived. Prosperous gentry from New York City built summer homes and took up the “Corinthian” sailing craze. Smith’s customer base went from working class to racers.

He produced around 400 boats between 1876 to 1939, never using power tools; his wife Mariam sewed all the sails on a foot-pedal-operated sewing machine. His sailboats were ever-faster, often beating contemporary Nathanael Herreshoff’s designs. Smith’s boats also were uniquely beautiful. A Gilbert Smith racing catboat was a sight to see, if you could catch up with her.

Several builders over the years have produced replicas of original Smith catboats, including Mystic Seaport and a few builders near Shelter Island. One was built on the south coast of England, another in Finland, and at least one in Maine, by Lance Lee and his apprentices in Rockport.

In search of a boat to replicate

Thorne discussed his goal with his Marshall Cat racing chum, yacht designer Ezra Smith (no relation to Gilbert Smith), who’d recently collaborated on a project with Maine boatbuilder Alec Brainerd of Artisan Boatworks in Rockport. Artisan Boatworks, which is known for its restoration work and new builds of classic daysailers, was a natural choice for the project. The team also includes naval engineer Matt Smith (also no relation to either Gil Smith or Ezra).

The group visited boatbuilder Don Costanzo at Wooden Boatworks in Greenport, New York, which has built Gilbert Smith replicas, and the Long Island Maritime Museum in West Sayville, New York. They sought not only construction details, but also a specific boat to replicate.

Research led to an 1898 article in The Rudder about a 26' cat that Gilbert Smith designed to beat all his previous designs. He named her Mariam after his wife. Further efforts unearthed his original, hand-carved half-model for Mariam in the collection of the Suffolk County Historical Society in Riverhead, New York. Construction plans for Senad, another Smith catboat of the exact same size, were referenced for scantlings.

A laser-guided 3D measuring device was used to get lines from the Mariam half-model. “As far as I can tell, we are the first to go directly to one of Smith’s half hulls and record its exact shape by laser scanning as the basis for our boat,” said Ezra Smith.

Matt Smith used the laser scan to create a 3D computer hull model that matches the half hull shape when scaled up to full size to within approximately 1⁄8" to ¼" throughout.

They could not replicate the boat in Thorne’s photo because they never could determine which Smith boat it was, despite going through a comprehensive list of his builds put together by Daria Elizabeth Merwin in her thesis project Gilbert M Smith, Master Boatbuilder of Long Island, New York. The boat in the photo had likely changed names by the time she had been bought by Thorne’s ancestor. By analyzing the photo, they were able to determine that she was most likely a 21' B class racer. But because they couldn’t identify the exact boat, Thorne, who actually wanted a slightly bigger boat, decided he wanted to find a boat similar in size to Smith’s Senad, later renamed Madigan, and Mariam.

“From the inception of the project, it was a primary goal that we would replicate a particular boat, not create a ‘Smith Style’ catboat,” Ezra Smith explained.

So referencing similar Smith boats to fill in the blanks on details such as centerboard placement, they set out to design a boat as close to Mariam as possible, taking into account the rougher waters of Narragansett Bay where Thorne lives.

While Smith’s original boats were planked with cedar, the new boat, which will be called Whirlwind II, will be built using strip-planking and biaxial e-glass cloth. She will have laminated frames (the originals were sawn) that will match the scantlings and spacing of original Smith boats. Spars for the boat will be carbon-fiber to make the rig lighter to reduce weight aloft to allow her to handle windy, rough conditions without having to shrink the rig—a step sometimes taken when replicating classic race boats. In all other respects the boat will be vintage Gilbert Smith. It will have a wide king plank forward, the deck planks (over plywood) will be narrow and sprung to the plank sheer, and will join in a herringbone back aft. The rudder post will consist of a thick baulk of hardwood with the tiller penetrating through. The business end of the tiller will be the elongated diamond shape that is characteristic of Gilbert Smith and nobody else.

“We are doing our best to follow the exact plans for the original boat,” said Thorne. “But since we don’t have the original build drawings we have referenced similar plans, to make the best decisions possible without having the original boat to work from.”

The oval coaming common to a Gilbert Smith catboat will undoubtedly be ash or oak, and the seats cherry. One lovable addition will be a removable shelter top with side curtains over the forward half of the cockpit. Many of Smith’s boats had them when they weren’t being raced, as did a lot of the summer “party cats” of the Cape and islands.

“For me, the idea of sitting in the Gil Smith boat with my great-grandfather is a dream, but as a designer I’m equally fascinated with how the boat was designed and built and what challenges Gil and his team had, and how they came up with answers,” said Thorne. “This process has been a lot of fun because of the team involved and how each person has approached the challenge.”