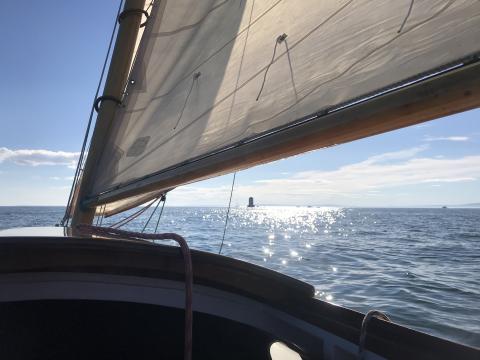 A new museum in Newport, RI, dedicated to telling the story of sail is asking sailors for help. The Sailing Museum, which is scheduled to open in May 2022, will feature exhibits celebrating the National Sailing Hall of Fame and America’s Cup Hall of Fame. Located in the historic Armory Building on Thames Street in Newport, R.I, it will include themed areas, beginning with Wind & Water, where visitors will be introduced to some of the basic principles of sailing. One of the exhibits in this area will be focused on the importance of caring for the places we sail.
As part of that the museum is inviting the sailing community to share what they are doing in their communities to protect and preserve the waters they sail on. They are requesting video submissions from sailors everywhere to help create a stewardship anthem that will be featured in the museum and its web and social channels.
To contribute to the stewardship video, sailors are asked to record a short video (up to two minutes) with a camera or mobile device.
“As sailors, we have a unique bond with our oceans and waterways. We’ve seen firsthand that our lakes, rivers, oceans and seas are being threatened by pollution, and declining habitat, which is damaging marine biodiversity and hurting coastal communities”, said Heather Ruhsam, Executive Director, The Sailing Museum. She continued, “we’ve also seen that the actions we take on land and sea can, and do, make a difference. Through The Sailing Museum we can share our collective efforts from coast to coast with sailors and non-sailors alike, inspiring all to take action.”

The link to learn more and/or post a video is here: https://thesailingmuseum.org/film/