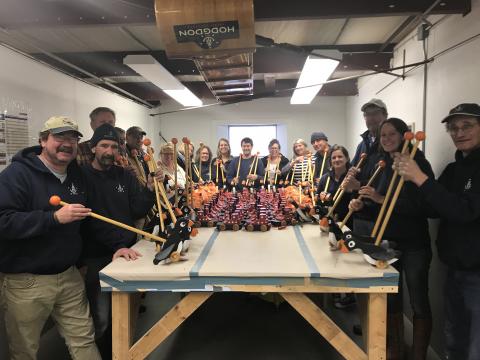 Hodgdon Yachts is known for constructing one-off sleek custom yachts that can take a year or more to build. But in recent weeks, the company’s employees assembled and launched a whole flotilla, numbering closer to 150. These were small hand-made toys, destined not for wealthy owners, but for families who might not otherwise be able to afford presents for Christmas.

Reviving a company tradition from 20 years ago, Hodgdon employees donated over 100 hours of time to build the toys, which will be distributed through Toys for Tots to children in Lincoln County, according to the East Boothbay-based company’s human resource manager Diane Hammond. 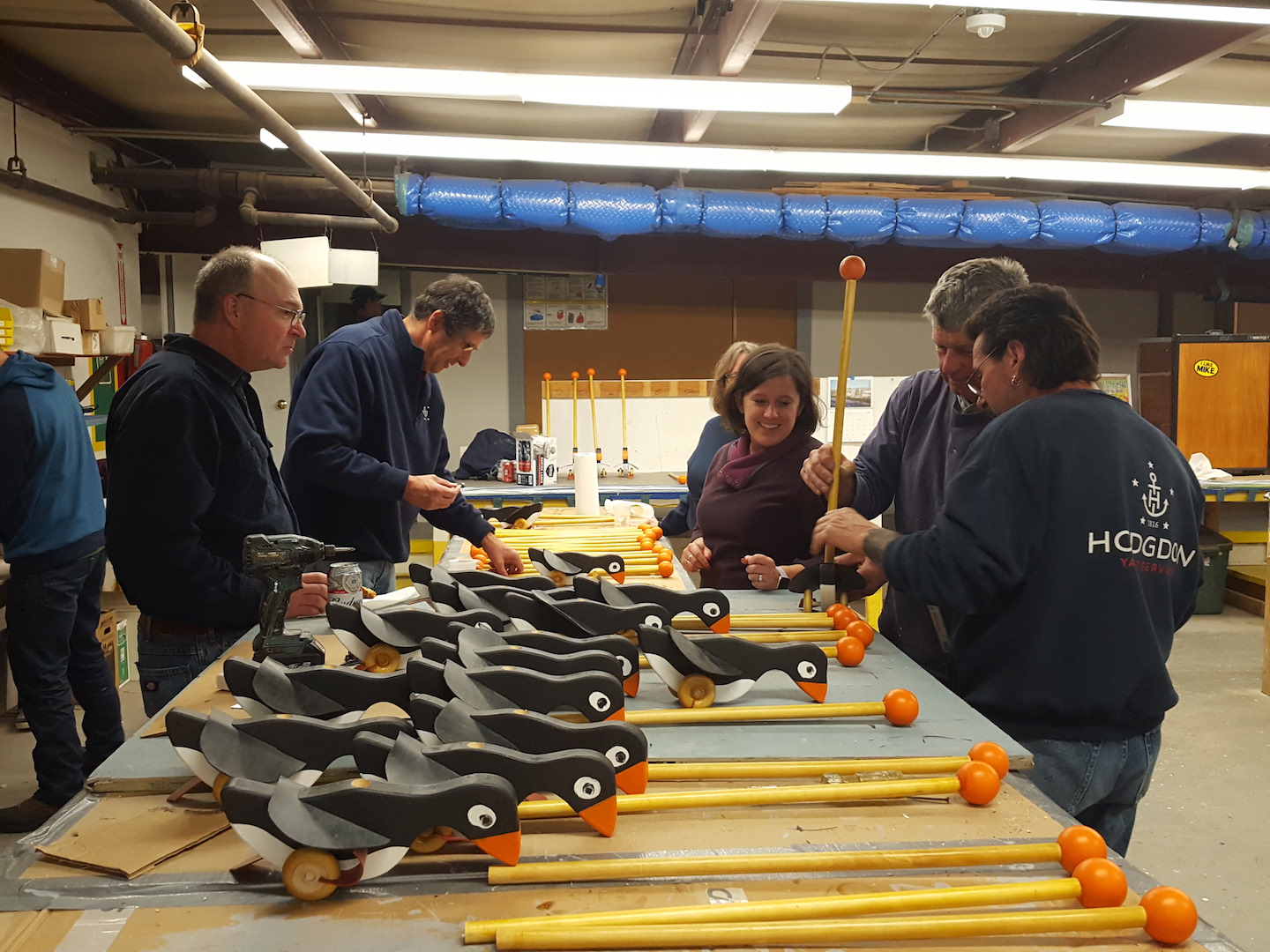 “Oh my gosh it’s been awesome,” said Hammond who organized the effort. “We have had an awesome time. Close to 90 percent of the workforce participated. We had as many as 13 to 21 people working at this every week.”

Soon after she was hired in 2017 she saw a couple of old wooden toys in an office. Company owner Tim Hodgdon told her about making the toys for three or four years in the 1990s and said he would like to resurrect the tradition.

Hammond recruited Hodgdon woodworkers Jim Jones and Dave Radtke to make patterns and templates. Paint specialist John LaCharite helped oversee the painting. The toys included two from the company’s effort in the 1990s: a red tugboat on wheels and a puffin push toy with feet that flap; and a new design: a set of blocks packaged in a bait bag. 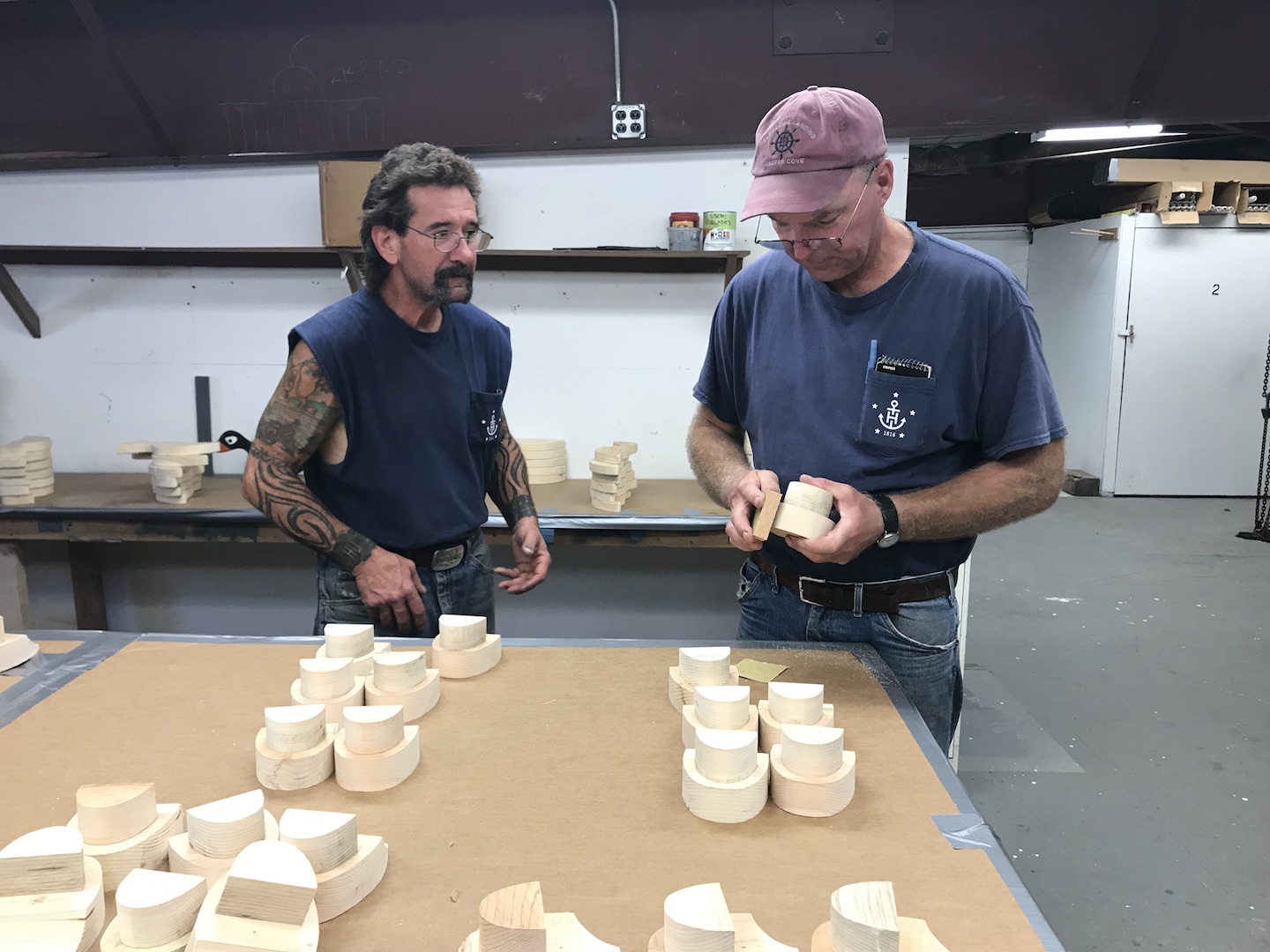 The company set aside Wednesday afternoons for the project during the fall in Hodgdon’s Southport and Damariscotta locations. Hodgdon paid employees who chose to participate for the first hour of their time that day, and the employees donated the second hour. The company also provided pizza and other refreshments.

In addition to the toys, this has been a busy fall for Hodgdon, which launched two new luxury tenders last week destined for a superyacht under construction in Germany. And the company has orders for three more tenders.

While the toy  project was intended to do something good for the community, it was also a great team builder for the company, Hammond said. 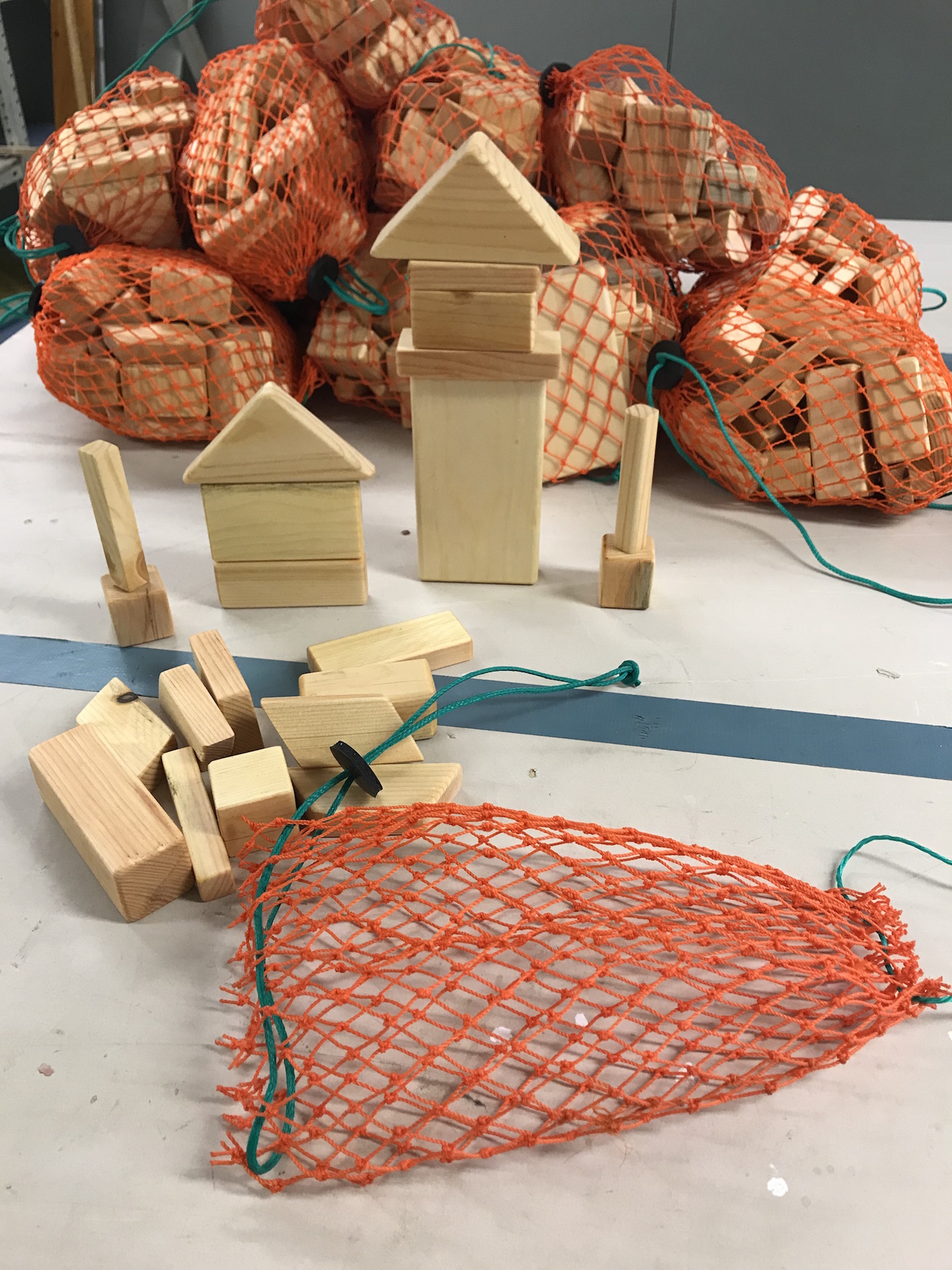 “We all work in separate buildings and don’t have a lot of time to interact,” she said. “It’s been really great for everybody to get together and chat and get to know each other.”

The team finished up the last few toys this week and will deliver them next week to Toys for Tots. A national foundation that was founded to provide toys for families who might not otherwise be able to afford them, Toys for Tots has a handful of Maine chapters.

The toys are lovely and Hammond said she’s had quite a few requests from people who want to buy them. But these toys are not for sale. 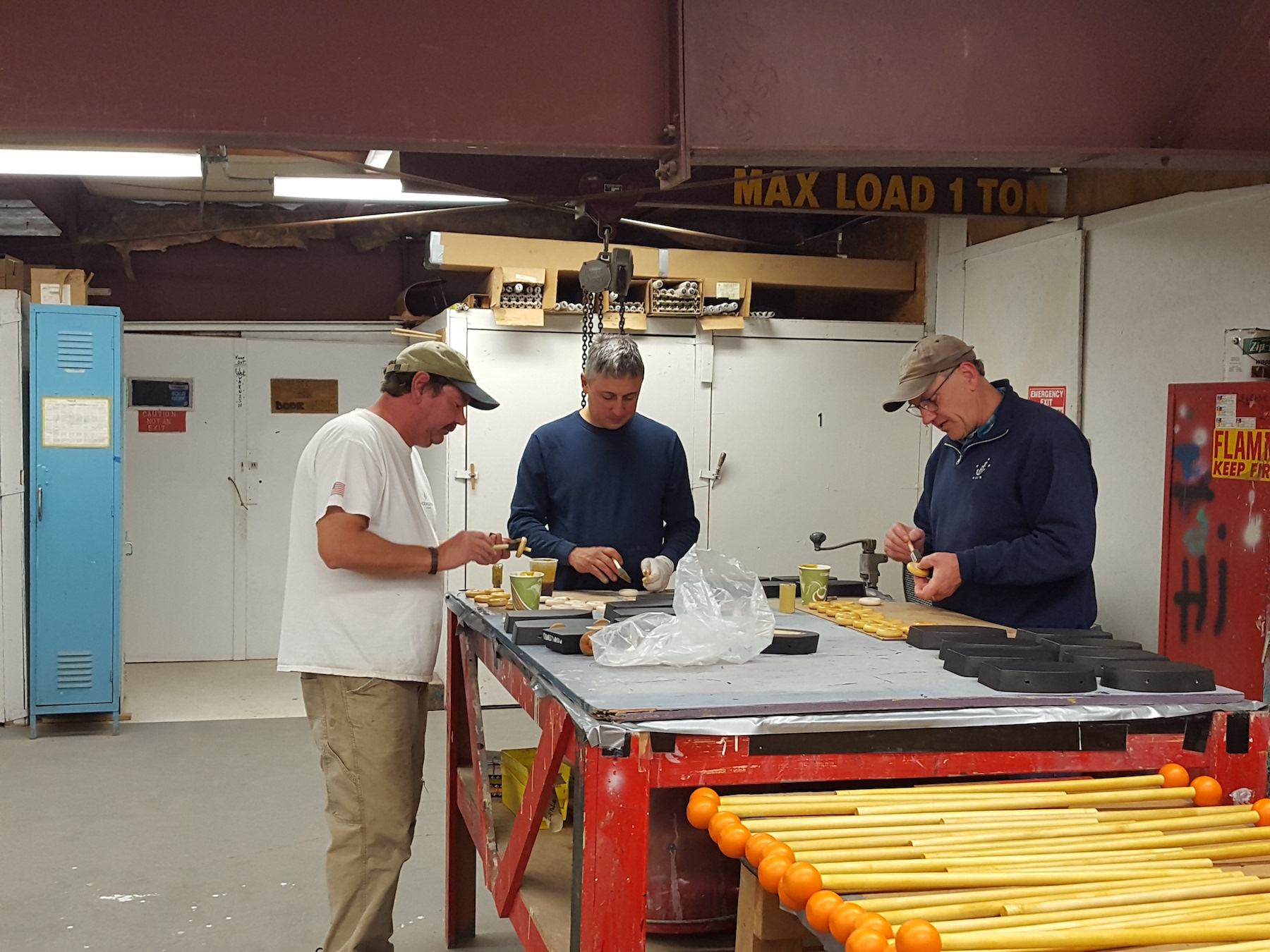 “These are just for Toys for Tots,” said Hammond. Then she chuckled. “I don’t think Tim Hodgdon was planning on selling boats this small anyway.” 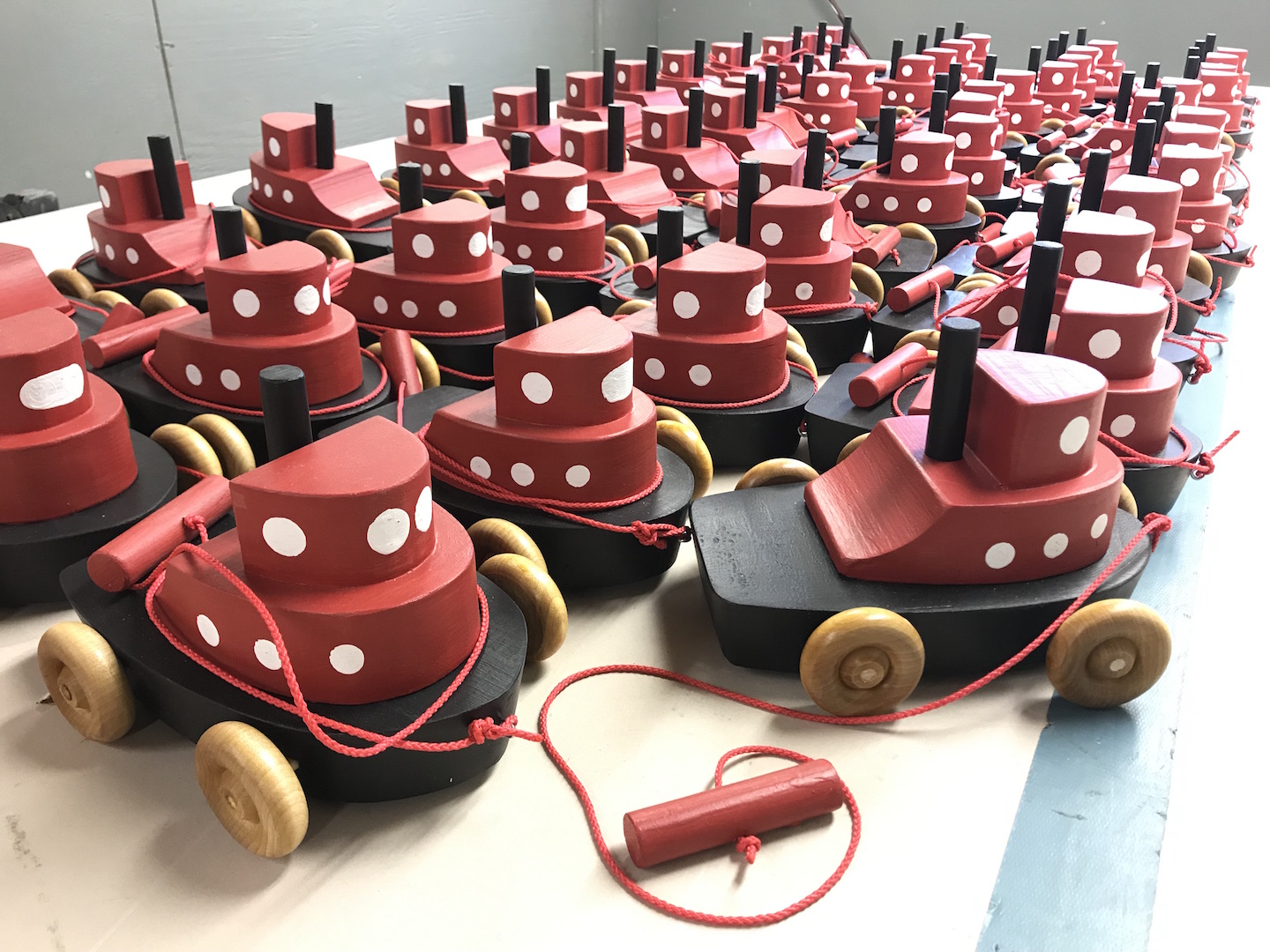