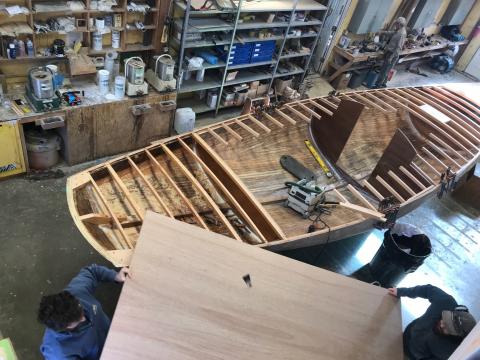 As much of the country, Maine included, battle the Coronus virus pandemic, many businesses have shut their doors. Along the Maine waterfront, boat-builders remained at work, but all was not business as usual. Most yards have shut their doors to the public, asking that boat-owners and others postpone visits, or at the least make appointments, staggered work hours to keep employees at least 6 feet apart, and implemented rigorous cleaning routines.

An email earlier this week to customers from Thomas Allen, the president of Kittery Point Yacht Yard, echoed comments heard from many other yards along the coast. "We are continuing to work on boats at this time, but are limiting technicians to one per vessel wherever possible,” he wrote. “If your boat is with us at either facility and it is critical that you access your boat, please contact your KPYY representative before coming to the yard as yard manager approval will be required.”

All of this could change, though. Late Tuesday, Maine Gov. Janet Mills issued an order requiring many non-essential Maine business to close in order to prevent the virus from spreading. The businesses deemed non-essential, including to the order, included malls, gyms, and salons, as well as non-essential workplaces that are not public but require more than 10 workers to convene in a space where physical distancing is not possible. Stacey Keefer, executive director of the Maine Marine Trade Association was trying Tuesday afternoon to assess how this would apply to boat builders. Ultimately the decision of how to respond would be up to individual businesses, she said.

The state’s biggest marine supply retailer, Hamilton Marine, announced a temporary shutdown of both its five stores and its warehouse, which took effect last Friday afternoon. “We had a lot of nervous employees,” said Hamilton Marine’s owner Wayne Hamilton, explaining the decision. “I wish everybody would take steps like this now so this doesn’t stretch out and kill us all financially.”

Hamilton Marine would continue to provide supplies when asked, for the Coast Guard and Marine Patrol, Hamilton said. Like many boatbuilders, the company also has donated all of its respiratory masks to local hospitals, he said. He did not know when the stores and/or warehouse would reopen. Company managers review the situation daily, he said.

Some manufacturers, including the Brunswick Corp., which makes Mercury engines, announced a temporary suspension in production due to the coronavirus. At Sabre and Back Cove Yachts, Vice President of Sales and Marketing Bentley Collins said the company was continuing to follow its regular production schedule, while watching the situation carefully. But Sabre’s celebratory rendezvous for its 50th anniversary, which had been scheduled for this June, has been postpone until next year.

As of last week, no one had called to cancel a boat order and none of the company’s 340 employees had been laid off, Collins said, noting that the company had been short-handed anyway. "At this point everything is fine but you just don’t know,” Collins said. He pointed out that boats may be the ultimate social distancing vehicle.

Meanwhile, employees who can do their work from home are, and workers are following proper hygiene and keeping a proper distance from each other, he said. The recommendation has been to keep at least six feet between people. “A lot of Mainers feel that might even be a little too close,” Collins said with a chuckle.

Lyman Morse in Camden and Thomaston has a number of big projects underway. Like other builders, including Hinckley, the company has implemented staggered shifts for its 152 workers to keep as many people as possible employed while working as far apart as possible, said company president Drew Lyman.

“We’re just trying to react day to day,” he said. “We are trying to be proactive and not waiting for someone to tell us what we have to do. The moment somebody tells us to shut down that will be a bummer.”

Like Kittery and other yards, Lyman is asking customers to please stay away.

Lyman Morse hosts the annual Camden Classic Cup in July in Camden. As of Monday, plans for the event had not changed, Lyman said.

At Artisan Boatworks in Rockport, owner Alec Brainerd said his crew is making sure to routinely disinfect workspaces, and taking other steps recommended by the CDC.” We have a couple of employees who are high risk. Guys in their 60s who smoke made it clear to younger guys that their actions are not so much about protecting yourself as for these other guys,” Brainerd said.

But like other builders, the yard did not plan to stop working. “We are encouraging everybody to plan as though summer will happen,” Brainerd said.

Boat shows have been postponed, including the Maine Boat Builders Show, which was to have taken place last weekend in Portland. In Florida, the Palm Beach International Boat Show was rescheduled from late March to May 14-17.  Maine Boats, Homes & Harbors hosts the annual Maine Boat and Home Show in Rockland every August. Show organizer John Hanson said that as of Tuesday, plans for the show this Aug. 7-9 remained on target.

Dale Dyer, manager at Custom Float Services in South Portland, said his company just delivered the largest float system the firm had ever built to a customer in Massachusetts. His crew has been busy and the company has jobs lined up for the next few months. But he worries about the impact of the pandemic and shutdowns on his supply chain. "We still plugging and trucking," he said. “But we are keeping an eye on it.”

At Hinckley, Vice President for Sales Phil Bennett was refusing to let the slew of negative news get him down. Hinckley has asked owners to stay away from the yard, but sales reps will still meeting one on one with potential buyers to show them boats, he said. Work places were being continuously disinfected and employees who feel sick were being asked to stay home. “We need to preserve our best tools,” he said, “which are our people.”

Some customers have pushed the hold button, he added, while others have said they want their boats delivered on schedule. "If you have to be in seclusion with your family, wouldn’t you rather be in the Gulf of Maine or somewhere nice on a Hinckley than in an apartment in New York? This could be a great opportunity to get on a boat. Everything will be fine eventually; we just don’t when that will be.”

Bennett ended the conversation with a boating analogy.

“If you are in bad weather offshore, you can’t just get off your boat,” he said. “One of the things you need to do is focus on the horizon — something fixed and stable in the future. You can’t sit in the cockpit and look at every wave. That will make you seasick and incapacitated as a crew member. My philosophy is don’t focus on each wave. Will you still feel bad? Yes, but there is a horizon; there is a future. Keep that in sight. The world is not going to end.”

Photo: Employees at Artisan Boatworks work on a Camden Class sloop under construction earlier this spring.