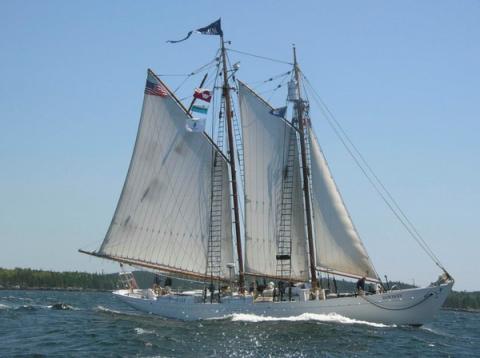 To launch its sixteenth annual Castine Classic Yacht Race, the Castine Yacht Club, in cooperation with Mystic Seaport and the American Schooner Association, is sponsoring a celebration of significant schooners on July 29. Dana Hewson, Senior Curator at Mystic, will chair a symposium featuring a distinguished panel of skippers, builders and historians.

The symposium will start at 4 PM at Maine Maritime Academy's Delano Auditorium. The public is invited.

Preceding the symposium, the schooners will be on exhibition at the Castine Town Dock from noon until 3:30PM. The schooner fleet will include: Bowdoin, the historic schooner designed by William Hand for arctic exploration and built by Hodgdon Brothers in 1921, sailed by the Maine Maritime Academy; Brilliant, the famed Sparkman and Stephens designed schooner built by Nevins in 1932 and sailed by Mystic Seaport; Rebecca, Juno and Charlotte, each designed by Nat Benjamin and built by Gannon & Benjamin from 2001 to 2007; and Malabar II, designed and originally owned by John Alden, built by Charles A. Morse in 1922.

The sixteenth annual Castine Classic Yacht Race to Camden will set sail from the Castine Harbor bell at 11:45AM on Thursday, July 30st. This 18 mile race, which feeds into the Camden to Brooklin race and the Eggemoggin Reach Regatta, is expected to attract a magnificent fleet of Classic and Spirit of Tradition yachts, according to David Bicks, Chairman of the Castine events. Black Watch, the 68' Sparkman and Stephens yawl built in 1938, will be returning to defend its Ames Cup victory last year.

The race notice and sailing instructions are available on www.castineyachtclub.org