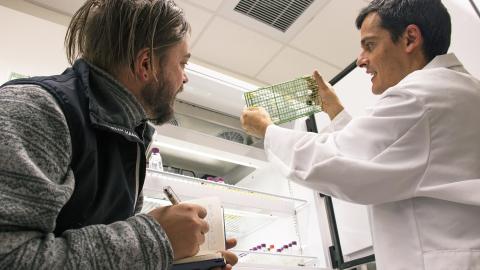 Bigelow Laboratory for Ocean Sciences plans to collaborate with Justin Levesque, an award-winning, interdisciplinary artist from Portland, Maine, on a project focused on marine viruses.

Levesque will partnered with Joaquίn Martίnez Martίnez and Silvia Cretoiu, research scientists at Bigelow Laboratory who study these viruses — one of the most important and least understood parts of the ocean.

As a visiting artist-in-residence, Levesque will travel to the nonprofit research laboratory to gain inspiration for the art he will create. His work will focus on research examining viruses in Antarctic lakes that were formed from seawater thousands of years ago. The project will culminate in an art exhibit planned for public display in summer 2019.

“We study some of the weirdest, wildest organisms on the planet,” Martίnez Martίnez said. “They may be so small that you can’t see them without a microscope, but they have a huge impact on our planet’s health. Art has a unique power to help people experience and understand these mysterious parts of our world in ways that would otherwise be impossible.”

Bigelow Laboratory has previously undertaken other artistic projects to help people contemplate the importance of microscopic ocean life. In 2016, the laboratory hosted its first artist-in-residence, Carter Shappy, a Maine College of Art alumni who created the two-story Colorcosm installation that currently hangs at the nonprofit’s East Boothbay campus. The laboratory also created Tiny Giants, a collection of large-scale photographs of microscopic marine life that is currently on display at the Portland Jetport.

Levesque’s residency at Bigelow is the latest extension of his work exploring and identifying shared themes between art, science and technology.

“From commerce to science to natural history, I am particularly interested in the dynamic functions of polar systems and how the parts of those systems interact and intersect,” Levesque said.

Levesque previously completed an artist residency aboard an Eimskip container ship that sailed from Maine to Iceland, creating a public art exhibit in 2016 that appeared in multiple locations around Portland inside a shipping container. In response to this work, he was invited to be a fellow of The Arctic Circle artist residency in Svalbard, Norway, in June 2017.

“The relationship between an artist and a scientist can and should be both collaborative and mutually beneficial. There’s so much we can learn from each other.” Levesque said. “And when science can find its way out of the lab and into the public, that’s when the conversation really gets good.”

Caption for the photo above: Scientist Joaquίn Martίnez Martίnez shows artist Justin Levesque vials of marine algae infected with viruses at Bigelow Laboratory for Ocean Sciences in East Boothbay. As a visiting artist-in-residence at the nonprofit research laboratory, Levesque recently began working to gain inspiration for an art exhibit that is planned for public display in summer 2019.