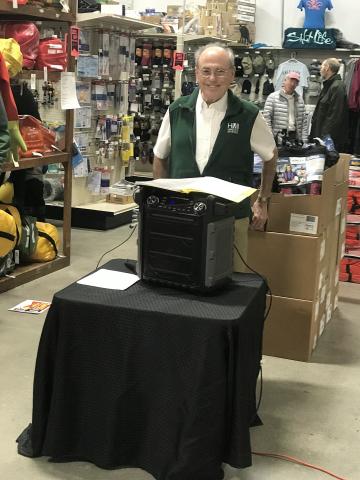 Hamilton Marine, the Maine marine supply store known to boaters throughout the Northeast, plans to open its sixth marine store at a location in Kittery. The new store will be located in  building that formerly housed Jackson’s Hardware and Marine store, whose owners recently retired.

“With 100-plus years of business in a location rich in history, we are inheriting a loyal customer base,” said Hamilton COO Andrew Blanchard, in a news release.

“We’re known for the size of our inventory and the diverse markets we serve,” said Wayne Hamilton president and owner, in a news release. “Over the next few months we will work on updating the Kittery store to fit our needs and steadily add stock until it’s filled. Commercial fishermen, boat builders, and yachtsmen should all find what they’re looking for when we’re done.”

Hamilton, a Searsport native, has been on the water most of his life. He lobstered before opening his first “store” in his Searsport garage in 1977 selling commercial fishing supplies.

Shortly afterward he moved to Route 1 and was joined by his (late) wife, Loraine and her siblings.

“We’re still family owned and operated” said Hamilton, “and try to keep a family feel to the place even though we now have over 150 employees.”

Hamilton Marine Inc. has locations in Searsport, Portland, Rockland, Southwest Harbor and Jonesport. The company sells mail order via telephone and the internet, shipping product daily to customers all over the world.

Last March, the company held a grand opening at a new location in Portland, after moving its store in that city from Fore Street to 197 Presumpscot Street.