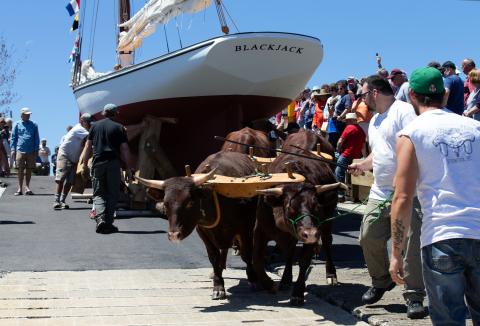 Over a century after she first slid down the ways at Wilbur Morse’s yard in Friendship, the newly restored Friendship sloop "Blackjack" was launched Saturday July 7.

The drawn-out ceremony included bagpipers, fiddlers, and many helping hands, including a team of four oxen from Cox Kennel and Farm in Woodstock, Maine, that helped pull the 33-foot vessel from the Sail, Power, and Steam Museum to the Rockland, Maine, public landing at Snow Marine Park. Capt. Jim Sharp said that was how the boat might have been launched 100 years ago. Sharp and his wife, Meg, own and run the museum. 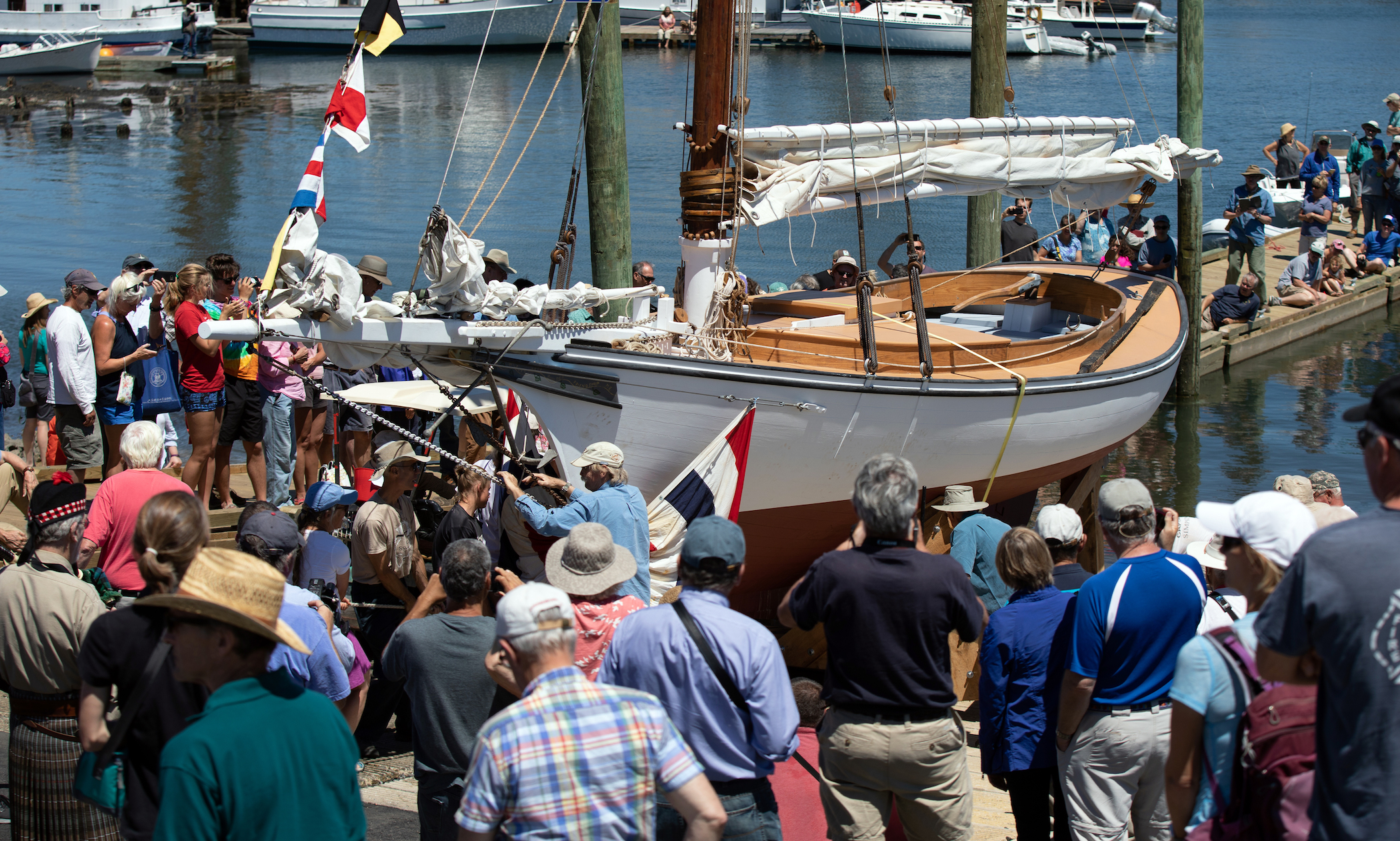 The Friendship sloop was the most popular small workboat on the Maine coast before the lobster fishery was revolutionized by the gasoline engine. They featured a wedge keel, a wide cockpit and shallow deck. Their gaff rig made them easy to maneuver, which was useful because often they were worked by just one man. The type became known as the Friendship sloop because in the late 29th century, Morse was a principal builder, turning out a boat in his Friendship-based shop almost every three months from the 1880s until 1927 when he retired. 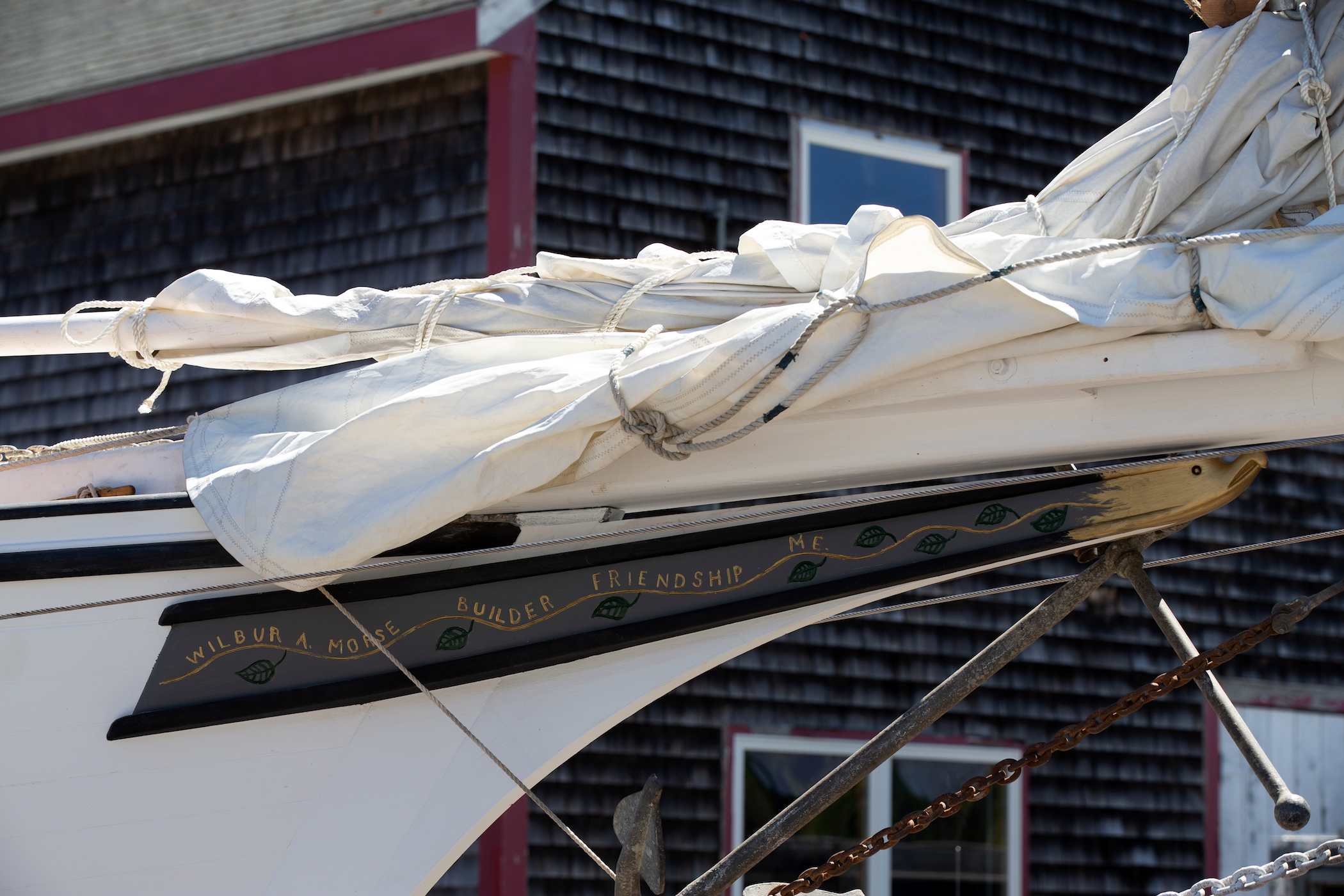 Sharp acquired Blackjack from out-of-state owners, who were overwhelmed by the massive restoration required. “We rebuilt the vessel entirely,” he said. “She had a broken keel, all the frames and the planking was gone and the sheer was lost.”

The rebuild process included consulting with wooden boat expert Maynard Bray and boat builder Ralph Stanley, who has built several Friendship sloops, on the design and techniques Wilbur Morse might have used. The wood for the new frames and keel came from a stand of English oak that had been planted long ago in Friendship — to keep the genes in the right place, said Sharp. A team of master builders that included Jim Loney, Tim Clark, and Garrett Eisele, worked with a group of dedicated volunteers on the project. They planked Blackjack below the waterline with cedar and above with native pine.

“We replaced everything but the transom,” said Sharp.

This is not the first launching in modern times to use an oxen team. Back in 1965 Jim Rockefeller built a friendship sloop in his shop on Bald Mountain some eight miles from the water. On launching day, two teams of oxen hauled the boat down to Rockport Harbor for its launching. Teams of oxen were used again for a launching in 1977 at Rockport Marine.

At Blackjack's launching, Sharp’s wife Meg christened the boat before it was slowly pushed into the water by volunteers. He said the vessel would be used to take passengers out in Rockland Harbor to learn about lobstering using old wooden traps, joining Persistence, another friendship sloop restored at the sail and steam museum and launched several years ago.

Blackjack will be on display on the docks at the Maine Boat & Home Show in Rockland on Sunday, August 12. For more information, or to purchase tickets to the show, go to maineboats.com/boatshow.