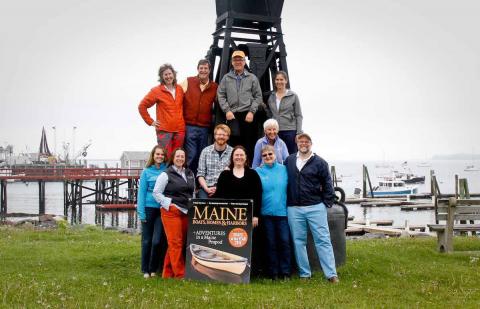 Maine Boats, Homes & Harbors magazine celebrated 30 years in print this fall, which happened to coincide with receiving some well-deserved honors from peers in the publishing world. The magazine won two honorable mentions for editorial excellence in Folio’s prestigious national magazine contest for 2017, and six more awards in the International Regional Magazine Association’s 2017 contest.

The Folio “Eddies” were for general excellence in the Automotive/Enthusiast category, and for a story by MBH&H Editor Polly Saltonstall in that same category about charting the coastline and ocean bottom (https://maineboats.com/print/issue-144/charting-coast).

IRMA awarded the magazine silver medals in the following categories: Illustration, for a drawing of a caretaker closing up a house by Caroline Magerl; Art and Culture Feature, for a story by Ann Dodds Costello about the Van Campen family of artists; and Historical Feature in the under 30,000 circulation category for Rob McCall’s story about John J. Audubon and his travels in Maine.

MBH&H won bronze medals in the General Feature category for a story by Paul Molyneaux about Eastport’s pilots and in the Photos Series for magazines in the under 30,000 circulation category for Robert F. Bukaty’s photos of dredging in the Royal River. Peter H. Spectre won an award of merit in the Column category for his Postcard in Time column series.

This approach of exploring life on the coast through a mix of voices, stories, and vantage points has been key for 30 years. It all began in 1987, when John K. Hanson Jr. was cruising around Penobscot Bay in his 22-foot wooden powerboat. He and friends were chatting about boats, art, and houses, while porpoises jumped in the boat’s frothy wake. This is what makes Maine special, he thought; it should all be in a magazine. So he quit his full-time job, took out a $10,000 home equity loan and with the help of a group of dedicated colleagues started the magazine known then as Maine Boats & Harbors—the Homes part was added in 2006.

From the beginning, the intent was to showcase the quality of Maine craftsmanship and induce readers to “buy Maine.” And the magazine has been doing that and more ever since. Published six times a year, Maine Boats, Homes & Harbors magazine reflects in words and images life along the Maine waterfront, whether on the ocean, a lake or river. The magazine brings a boater’s sense of simplicity, practicality and elegance to its coverage of boats, art, science, history, and food.

The mission is to educate, entertain, and to promote boats, the coast of Maine, and its makers. The goal is to promote healthy coastal communities, and to get more people out on the water, buying and enjoying boats.

In addition to the award-winning print magazine, MBH&H publishes an online edition, and produces an annual boat and home show in Rockland during the second weekend in August.

Below are the list of IRMA awards with judge’s comments, and links to the stories:

Historic Feature 30,000 or less APR Silver – Grand, Wild, and Terrific: John James Audubon and his travels through Maine by Rob McCall and Polly Saltonstall Judge’s comment: Wonderful package wrapped around a strong historical story. I can easily see how the magazine's readers would be delighted by this. https://maineboats.com/print/issue-141/grand-wild-and-terrific

Art and Culture Feature Silver – When Art is a Family Affair by Ann Dodds Costello Judge’s comment: Neat story. The concept and execution were strong. https://maineboats.com/print/issue-143/when-art-family-affair

Column Award of Merit – A Postcard In Time: The Gloriously Stable Flattie Skiff; Going for a Ride; Bravo, Mr. Roosevelt by Peter H. Spectre Comment: Quirky, but certainly on-message. Love the concept/hook for the column (postcards), and the writer's enthusiasm carries the reader.

Illustration Silver – Behind the Scenes by Caroline Magerl Comment: The tone of the illustration harmonizes well with the story and the page. Communicates the idea with elegance. https://maineboats.com/print/issue-143/behind-scenes