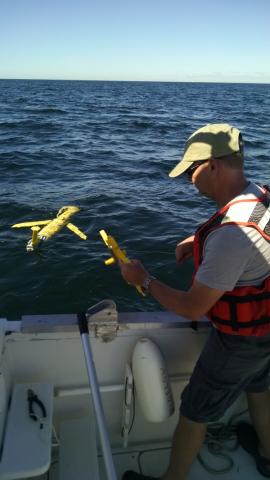 A team of scientists that has been sampling the waters of the Gulf of Maine regularly for the last 18 years as part of a NASA-funded study reported in a recent paper on an overall reduction in productivity in the Gulf of Maine.

Dr. William "Barney" Balch at Bigelow Laboratory for Ocean Sciences and scientists from the U.S. Geological Survey, Dr. Thomas Huntington and Dr. George Aiken, found that the amount of dissolved organic carbon from rivers emptying into the Gulf of Maine has increased over the last 80 years, a trend they predict will continue through 2100 if annual precipitation continues to increase. The adjacent Gulf of St. Lawrence also was found to supply a significant amount of organic material into the Gulf of Maine via the Scotia Shelf Current. Collectively, these conditions appear to be contributing to the decline in the Gulf's primary productivity, as reported in the American Geophysical Union's journal, Global Biogeochemical Cycles, Volume 30, Issue 2, February 2016, pages 268-292.

Balch explained the significance of this finding: "As increasing amounts of dissolved organic matter leaches from the soil into rivers after rains, these materials ultimately flow directly into the Gulf of Maine or indirectly from the Gulf of St. Lawrence via the Scotian Shelf Current. This organic matter is rich in colored humic materials that impart a brown color to the rivers in Maine—think of a dark "tea" steeped from dead leaves and soil. This input actually changes the color of the seawater and appears to be reducing the light available to phytoplankton for photosynthesis and growth, causing a decline in overall productivity."

Ocean color serves as a useful proxy for understanding some of the changes in fundamental processes that are happening in the sea as the climate changes. Normally the ocean is blue with little light absorption. When there is a lot of chlorophyll-containing phytoplankton (microscopic plants) in the water, the water has a greenish color, just like plants do on land. However, the dissolved organic matter delivered to the Gulf of Maine by rivers, has a yellowish-brown "tea" color which gives the normally blue ocean a yellow tint. This organic matter also absorbs light necessary for photosynthetic organisms, and can thereby influence the ecology of the Gulf of Maine, said Balch.

The researchers' data suggests that increases in precipitation and runoff during the last 80 years have resulted in more of this organic, dark-colored "tea" being delivered to the Gulf of Maine, which could be affecting how marine plants are able to photosynthesize and grow.

Because ocean color is one of the best indicators of what is happening in ocean waters, Balch and his team compared their color measurements of the Gulf of Maine with 1912-1913 color data recorded by Henry Bryant Bigelow, considered the founder of modern oceanography and for whom Bigelow Laboratory was named. In 1912, Henry Bigelow had the foresight to make manual ocean color measurements as he plied the Gulf of Maine aboard his schooner, Grampus. Bigelow used a simple technique published in 1890 by François-Alphonse Forel, a Swiss lake scientist. Balch's team compared Bigelow's original color data with current water color measurements to document color change over a century time scale. The conclusion is that the Gulf has yellowed over the last century, particularly in coastal Maine waters.

Climate and hydrologic models predict increasing precipitation and runoff in the Gulf of Maine watershed in the 21st century. Based on these projections, Balch, Huntington, and Aiken predict that river discharge of soil-derived dissolved organic carbon into the Gulf of Maine could increase close to 30% over the next 80 years, potentially contributing to a continued decline in the productivity of this coastal marine food web.

Today scientists use NASA's Earth-observing satellites and sophisticated shipboard optical measurements to document ocean color. The Bigelow Laboratory-USGS research team also showed a direct link for the first time between satellite-derived measurements of dissolved organic carbon across the Gulf of Maine with dissolved organic carbon discharged in rivers as estimated by the USGS, which go far to validate the satellite-derived measurements as an important predictive tool. With this solid foundation of data and collaboration, the research team expects to continue to mine the data to advance understanding of ongoing changes in the Gulf of Maine.

Bigelow Laboratory for Ocean Sciences, an independent not-for-profit research institution on the coast of Maine, conducts research ranging from microbial oceanography to large-scale ocean processes that affect the global environment.

Caption: The unmanned submersible named Grampus is used by the team at the Bigelow Laboratory for Ocean Sciences to collect data in the Gulf of Maine.