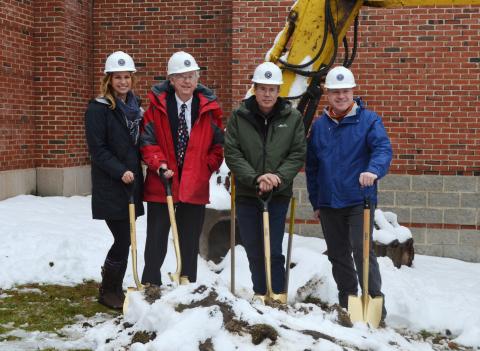 The Maine Maritime Museum in Bath has begun construction of a new 600-square-foot gallery space that will house an immersive lighthouse exhibit, Into the Lantern: A Lighthouse Experience. Opening in summer 2017, the exhibit will house the second-order Fresnel lens that that once guided ships into Portland, Maine, from the east Cape Elizabeth Lighthouse tower (formerly known as Two Lights). The lens in the exhibit is the original ca. 1874 Fresnel lens that was in the east lantern until 1991.

Into the Lantern: A Lighthouse Experience will be the first exhibit of its kind to include a 180-degree media projection system with time-lapse videography of the active panorama of the Gulf of Maine, simulating the experience of standing in the lantern (the room at the top of a lighthouse tower where the lens is located) by showcasing changing views of Casco Bay as seen from the tower.
“For the past three years we’ve been planning an exhibit that would honor the history of this particular lighthouse, the technology that makes Fresnel lenses so effective, and create an immersive experience unlike anything else we know of,” said Amy Lent, executive director of Maine Maritime Museum.

The new gallery was designed by Barba + Wheelock, a Portland architecture firm, and construction will be managed by Zachau Construction of Freeport.

The lens was formerly housed in the lobby at Cape Elizabeth Town Hall.