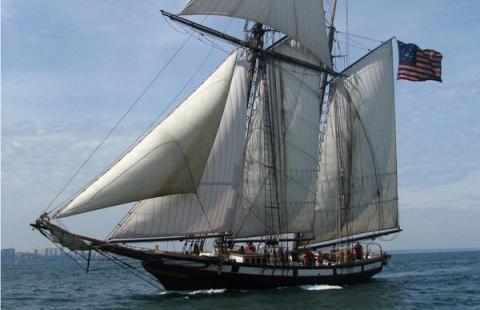 This has been a week for magnificent big sailing vessel in Maine.

On July 18, 2015, a fleet of magnificent tall ships will sail into Portland's harbor as part of the TALL SHIPS CHALLENGE® Atlantic Coast 2015 series of races and public maritime festivals. Earlier this week, the French-built frigate L'Hermoine sailed up Penobscot Bay and spent several days in Castine.

In Portland, the tall ships will muster for the Parade of Sail just southeast of Portland Head Light around 1:15pm on Saturday, July 18. The parade begins at 1:45, when the first ship sets sail for the main ship channel into Portland Harbor. Up to 14 ships are expected to sail in the Parade, stretching out single file for more than 2 nautical miles.

Ships expected to participate include

U.S. sailor in Vendee Globe has rounded the Cape of Good Hope