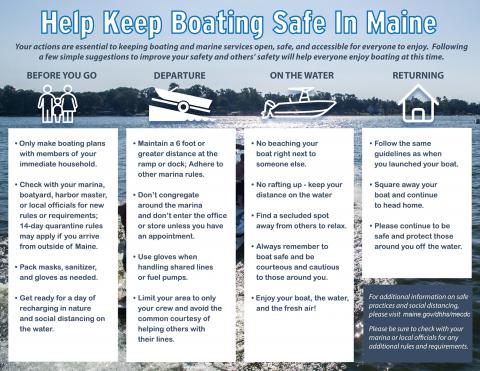 As Maine and the rest of the country deals with the fallout from the coronavirus pandemic, boatyards, marinas and others marine businesses around the state are preparing for summer. Complicating factors have been the state’s guidelines for social distancing, and a 14-day quarantine requirement for visitors arriving from out of state.

Boating has been touted as the ultimate way to socially isolate, but shoreside services under the current emergency requirements are not business as usual. Many marinas have locked restrooms and showers or restricted access, and boatyards have either remained closed to the public, or required people to make appointments before visiting. Just about every business has asked visitors to wear face masks and restricted access to office space and work areas.

Despite these precautions, marina operators are doing everything they can to make boaters feel welcome. And Maine boatyards are bustling with work on new builds, refits, and other jobs.

Stacey Keefer, executive director of the Maine Marine Trades Association, has held regular zoom meetings with members since the virus-induced shutdown. While her members have reported boat cancellations, they also have heard from many others who plan on using their boats, “which is good,” she said. “It’s important to understand that boating in Maine is open,” she added. “People can go cruising. They should enjoy their time on the water, but they should have patience and think about calling ahead to know what’s available at their next stop.”

There have been conflicting reports about how to comply with the state’s quarantine requirement. Time spent travelling at sea will not count toward the 14-day requiems, according to Keefer.

“You can come in to a harbor or dock, but you shouldn’t get off your boat,” she said. “If you do go ashore, you cannot be around other people at all.”

In Camden, where the town’s guidelines echoed those at other coastal harbors, out of state visitors arriving by boat must remain on their boat until the quarantine requirement is lifted, Harbormaster Steve Pixley said. All vessel owners must contact the harbormaster before arriving at any berth. There will be no handling of other people’s boat lines at the docks, no congregating on the docks, and one person at a time going up and down dock ramps.

In Northeast Harbor on Mt Desert, moorings and dock space will be available as normal except boaters must call in to register and pay by credit card. There will not be a passenger launch service. In addition, as of May 17, the Island Explorer bus service was not in operation.

Many marinas are offering to provide shoreside services to quarantining yachters. Lyman Morse at Wayfarer in Camden will deliver groceries dockside as well as drop off restaurant take out, they also will put customers in touch with a laundry service, and can provide longer distance services to customers holed up in more remote anchorage, thanks to a fast RIB, according to Drew Lyman, president of Lyman Morse.

Camden’s Pixley was hopeful that the situation would improve.

“I’ve been telling people that if things go well, maybe in a month, June 15 or June 18, if it looks like we have a fighting chance to beat this thing, boating could be the same. It’s a great way to get out.”

At this point though, he said the number of reservations for public dock space are far below normal. Usually at this time of year, he might have as many as 40 reservations. As of May 15, he had just one.

In Rockland, Yachting Solutions owner Bill Morong said he’s received more requests than usual from people who want to keep their boats at his facility for the season, and boat sales are as strong if not stronger than they were last year. But like Camden, he’s received few reservations for transient docking.

Yards have heard from some out-of-state owners who have decided not to launch boats this season, but others want to get their boats in earlier. At Rockport Marine, president Sam Temple said that while perhaps 5 percent of owners were not launching, the yard was busier than ever with new construction and refit work.

(The photo here shows a Concordia ready for launching at Rockport Marine, and in the foreground a sign noting the yard is off-limits to the public)

Like Rockport, Lyman Morse has had calls from people holding off on launching boats, but was busy with new work orders.

“The people who are waiting to launch have added more work, things like a refrigeration job, or stripping the varnish,” Drew Lyman said.

“The captains of the Maine Windjammer Association are working harder than ever to rise to this challenge,” said Barry King, Captain of the Schooner Mary Day. “We are creating operational guidelines for proposal to the powers that be allowing us to board guests and get underway with all due regard to the Governor's 14-day quarantine requirement. The entire process is going to require patience and perseverance,” he finished.

Even the classic yacht regatta schedule has been affected. The organizers of the Eggemoggin Reach Regatta for wooden boats, announced in a letter this week that the race was still on for Aug. 1, but shoreside parties have been cancelled, and racers will not be allowed to go ashore, according to a letter sent out by race organizers.

Drew Lyman said a decision had not yet been made on whether to cancel the three-day Camden Classic Regatta, which is scheduled for July 23-25. The final decision will be based in part on the status of the 14-day quarantine requirement as summer progresses, he said.

Many yacht clubs have cancelled sailing classes, while other sailing programs including SailMaine in Portland, have announced plans for the organization’s fleet of J22s to go in the water. SailMaine expects to begin its J22 rental program around June 1, the organization said in an email sent out to members and supporters but like other organizations working to reopen that will mean some fundamental new rules. All participants can expect to be required to wear face covers while at SailMaine—both adults and juniors. Gloves could also be a requirement. And SailMaine likely will not be able to loan people PFDs on a daily basis this year, according to the news release.

Keefer recently attended a virtual American Boating Congress hosted by the National Marine Manufacturers Association. “Word is that web traffic for marine -related sites has increased exponentially during the last two months as “people realizing that boating is a safe way to get away from people,” she said.

“I want people to know that boating is an option for them. But be patient and understand that just because your friend’s boatyard is doing something one way your boatyard may be doing something a different way. Call ahead and communicate with yards and dockmasters and harbormasters,” she said.

“It’s a good year to be prepared to be a little more self-sufficient, make sure your head and your shower are working.”