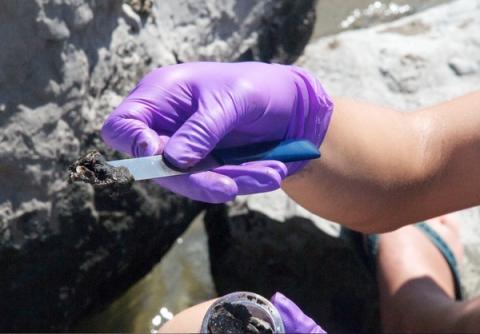 Dr. Christoph Aeppli from Bigelow Laboratory for Ocean Sciences was awarded a grant to investigate the long-term fate and effects of petroleum released during the 2010 Deepwater Horizon oil spill in the Gulf of Mexico. For this project, which will last until the end of 2018, Aeppli teamed up with Ryan Rodgers of Florida State University and Chris Reddy of Woods Hole Oceanographic Institution.

The three researchers will determine how the oil spilled from the Macondo Well weathered in the environment. Specifically, they will investigate, how the chemical composition of oil has been altered in the environment over the past six years, and how marine organisms may be affected by these changes.

"We observed that during oil weathering, petroleum hydrocarbons are transformed into novel compounds," explained Aeppli, Bigelow Laboratory senior research scientist. "Not much is currently known about these oil transformation products, but there are indications that they potentially have toxic effects. I'll be assessing how oil weathering changes its toxicity so that we can better understand how the oil spill affected the Gulf of Mexico ecosystem.

"This work will help predict the fate and effect of oil, which will help inform and improve cleanup efforts in future spills," he added.

This award was one of 22 research projects funded for the 2016 – 2018 period by the Gulf of Mexico Research Initiative to individuals and teams studying the effects of oil on the Gulf of Mexico ecosystem and public health. A total of $38 million was awarded to researchers to be spent over the next three years. For his part, Aeppli will receive $600,000 over three years to conduct his research.

Bigelow Laboratory for Ocean Sciences, an independent not-for-profit research institution on the coast of Maine, conducts research ranging from microbial oceanography to large-scale ocean processes that affect the global environment.