Early images of Monhegan capture a vanishing way of life

All photographs courtesy of the Maine Historic Preservation Commission

The remote location of Monhegan, its rugged natural beauty, and the uncomplicated lifestyle of its fisherman and their families began attracting artists and photographers to the island in the late 1850s. From the end of the Civil War to 1900, Monhegan grew in popularity as a seasonal art colony and a summer retreat with boarding houses, hotels, and cottages.

By the 1890s the dry plate glass negative gave photographers the means to work more freely in the field. During that decade four photographers made extensive pictorial records of Monhegan. Samuel Peter Rolt Triscott and Eric Hudson were professional artists who sometimes used their photographs to assist them in creating paintings. Edward Knowlton’s photographs complemented the watercolors of his artist wife, Maude Briggs Knowlton. While having no connection to the art world, Edward Robinson shared the enthusiasm and skill of his contemporaries for photographing the island. Triscott, Hudson, and Knowlton have been the subject of exhibits and publications documenting their work. However, Robinson remains largely unknown—examples of his photographs were shown for the first time at the Monhegan Museum in the summer of 2019. 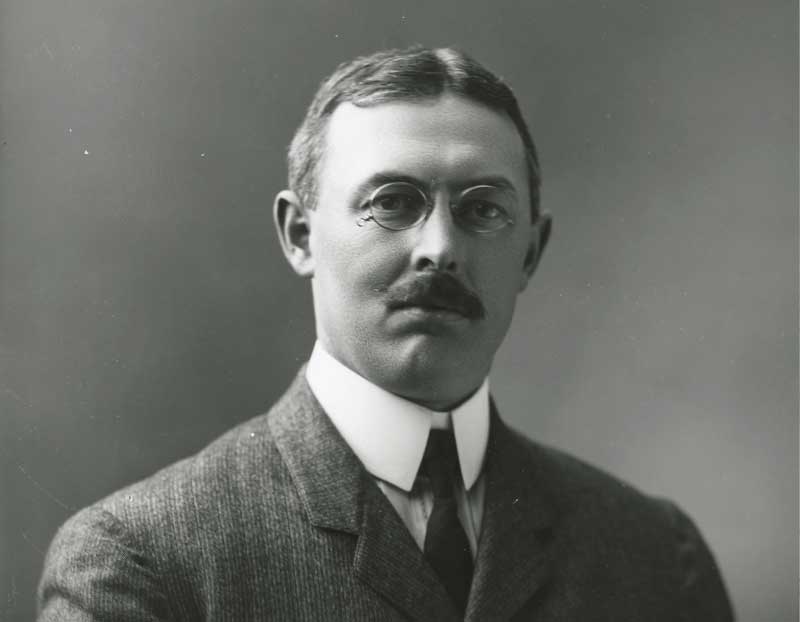 Edward Robinson Born in Vineland, New Jersey, on December 23, 1865, Robinson was descended from distinguished Thomaston, Maine, forebears on his father’s side. He grew up in the family house on Main Street and graduated from Thomaston High School in 1883. He attended the Massachusetts Institute of Technology, earning a Bachelor of Science degree in 1890. For the next six years, most of his time was spent at M.I.T. as a laboratory assistant and an instructor.

In 1896, he became a professor of mechanical engineering at Clarkson Institute of Technology in Potsdam, New York, teaching there for six years. In 1902 he was appointed to head the Department of Mechanical Engineering at the University of Vermont in Bennington, a position he held until his death in Thomaston on August 2, 1929.

Robinson probably adopted photograph as a hobby in the way many of his generation did after the introduction of the dry plate in the 1880s. Growing up in close proximity to Monhegan, he must have known the island well and viewed it as prime subject matter for his camera. In fact, most of Robinson’s surviving glass plate negatives and prints are of Monhegan Island, the few exceptions being those of Thomaston and Little Deer Isle.

Datable subject matter and period inscriptions indicate that Robinson’s photographs were taken in the 1890s, placing them in the same decade with most of the island pictures made by Triscott, Hudson, and Knowlton. Like these three contemporaries, Robinson chronicled every aspect of Monhegan—the harbor, the waterfront, fishing, Lobster Cove, the Headlands, Cathedral Woods, and the village. Reflected in the work of all four of these photographers is the view that in the 1890s Monhegan represented a vanishing way of life on the Maine Coast—one that was worthy of being recorded and celebrated. Of particular interest are Robinson’s photographs of fishermen at sea silhouetted against the fog, and his striking images of sunsets over Manana, precursors to Rockwell Kent’s sunset paintings of the next decade.

While Robinson’s teaching career took him to Massachusetts, New York, and Vermont, his August 3, 1929, obituary in the Rockland Courier Gazette stated that “he unfailingly spent his summers in Thomaston, occupying the old homestead, which is one of the town’s finest residences.” Almost sixty years later on July 25, 1988, James Julia auctioned the contents of the Robinson House. This accumulation of family objects dating back to the eighteenth century was so extensive that the auction notice did not mention historic photography. Fortunately, dealers Joe Reilly and Ken Shure recognized the significance of a battered brown suitcase containing Robinson’s negatives and prints, acquired them at the sale, and offered them to the Maine Historic Preservation Commission in Augusta, where they are now preserved.

When Robinson died in 1929, his obituary stated that “a very deep regard was manifested for him by everyone.” Now we are given the opportunity to appreciate the artful eye of this unheralded Maine photographer through his timeless images of Monhegan Island.