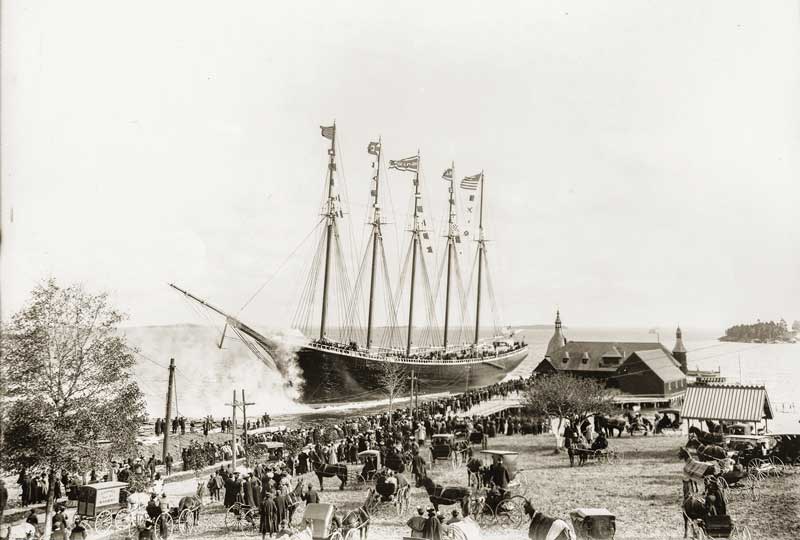 Schooner launchings were often festive, like this well-attended one in 1905 at the Holly Bean Yard in Camden (now Lyman-Morse at Wayfarer). At 308' LOA with a 48' beam and 27' draft, the Helen J. Seitz could carry 4,500 tons of coal. Ships such as this were the maritime equivalent of today’s trains and tractor trailers. Courtesy Penobscot Marine Museum

MAINERS HAVE BUILT thousands of boats and ships in the last 200 years. Four are the state’s signature types, wherever they are found: the canoe, the peapod, Friendship sloops, and lobsterboats.

The lobster industry, created by the first great lobster boom in the post-Civil War years, gave rise to three more distinctly Maine boats: the double-ender, or peapod; the sloop boat or Friendship sloop; and, once engines became common, the lobsterboat.

Built in Rockland in 1853 by George Thomas and designed by Samuel Pook, the 250' extreme clipper ship Red Jacket set a transatlantic record on her maiden trip in 1854. She sailed from New York to Liverpool, England, in just over 13 days, a record never broken by merchant sail.
The peapod seems to have originated on North Haven around 1870. Developed for inshore lobster fishing, these double-enders could be rowed in both directions, useful for working around rocks and ledges. This one, now at the Penobscot Marine Museum, was used on Matinicus Island. Courtesy Penobscot Marine Museum
Dating back to the 1850s, Friendship sloops were among the coast’s most popular workboats before the advent of engines. They were first called just sloops, then Friendship Sloops in honor of Wilbur Morse, who built boats from the 1880s until 1927. This is the sloop Dictator, built in 1904 by Robert E. McLain, tied up at a Stonington, Maine, lobster wharf. Dictator still exists, but as a pleasure yacht. Courtesy Penobscot Marine Museum
This early motorized lobsterboat, 40 feet long and 9 feet wide, was built in the 1920s by Vinalhaven builder L.A. Coombs and is typical of lobsterboats of that era. It had a top speed of 14 mph. Courtesy Penobscot Marine Museum
Built by Hodgdon Yachts in 2014 for internet entrepreneur Jim Clark, the 100' carbon-fiber monohull Comanche set a transatlantic sailing record in 2016 of five days, 14 hours, and 21 minutes. She had earlier set a 24-hour monohull speed record, sailing 618 nautical miles at an average speed of 25.75 knots. Photo by Onne van der Wal
Produced in 70 hours on the world’s largest 3-D printer at the Advanced Structures and Composites Center at the University of Maine in 2019, 3Dirigo is the world’s largest 3-D-printed boat. While based on a design under construction at Belfast’s Front Street Shipyard, 3Dirigo was not intended for use, but to demonstrate the potential of 3-D printing for the boatbuilding industry. Photo by Polly Saltonstall
The 44-foot Ivy Jean was built by SW Boatworks in 2019 and fin-ished at Mainely Boats in Cushing. The big Calvin Beal hull is an example of a recent trend toward bigger, faster lobsterboats. Photo by Brian Robbins
The Hinckley Yacht Company, started in 1928 in Southwest Harbor, was an early pioneer in fiberglass. The company’s first fiberglass production model was the still-classic Bermuda 40 in 1959, shown here on the production line, along with other boats, in an early photo. Courtesy Hank Hinckley
Capt. George Doughty and his Casco Bay Hampton Boat circa 1930. The earliest Hamptons had pinky (sharp) sterns and were powered by sail. Changing to square sterns made it easier to convert them to engines. The design lives on today in strip-planked Pulsifer Hamptons. Courtesy Penobscot Marine Museum
The Rangeley Boat is one of many Maine boats named for the place where they were built and used. For other examples, think Grand Laker, Lincolnville Wherry, Casco Bay Hampton, North Haven Dinghy. The first Rangeley boats date to the early 1870s. Double-ended, lapstrake, and stable, they were used by guides to take “sports” fishing. Courtesy Penobscot Marine Museum
Lobsterboats in the 1950s were smaller and narrower than boats in use today. They often carried riding sails in the stern to keep them steadier when pulling traps. These boats have been hauled up on the beach so their owners can work on them. Courtesy Penobscot Marine Museum
Started by the Gray family in 1903, the Old Town Canoe Co. was Maine’s largest canoe builder. This one was built in 1936 for a family member. Years later, descendent Benson Gray found and restored it. Courtesy Benson Gray
Native Americans were the earliest boat builders in Maine, build-ing dug-out canoes and then birchbark. Passamaquoddy artisan David Moses Bridges is shown in a canoe he built. Photo © Darel Gabriel Bridges
The 74' Foggy, designed by Frers Naval Architecture and modernist archi-tect Frank Gehry and built at Brooklin Boat Yard, drew on the talents of many artisans—the boat is as much a sculpture as it is a sailing vessel. Photo by Todd Eberle
Hinckley introduced its first modern powerboat in 1989 and in 1991 was the first American company to switch from fiberglass to Kevlar composites for its yacht hulls. Dasher, launched in 1994, was the first of many jet-powered “Picnic Boats.” Courtesy The Hinckley Co.
Depending on who you believe, the North Haven Dinghy is either the world’s oldest racing one-design still sailing, or the second-oldest. First built of wood in 1887 on lines taken from a visiting yachtsman’s tender, these gaff-rigged catboats have endured. Most of those still racing today are fiberglass. Photo by Alison Langley
The dory–a flat-bottomed, lapstrake-sided boat–was found on every New England working waterfront as early as 1800. The Banks dories had remov-able seats so they could be stacked aboard schooners fishing the Grand Banks. Here, builder Bert Murphy of Friendship stands with several nesting dories. Courtesy Penobscot Marine Museum
The Hodgdon family has been building boats in the Boothbay region since 1816, making them the country’s oldest boatbuilders still in existence. This image shows the yard around 1899. Courtesy Penobscot Marine Museum
The advent of computerized cutting machines has revolutionized boat-building in recent years, especially in the production of kit boats and their parts. This sailing skiff was built with parts cut by Hewes and Co. to a design by Doug Hylan. Photo courtesy Hewes and Co.
Affordable and practical, Corson runabouts—built in Madison, Maine—were extremely popular in the late 1950s and 1960s and could be considered Maine’s first fiberglass production boats. Photo by Polly Saltonstall
Body Footer:

As rusticators came from away in the late 1800s and early 1900s, they took to the water, starting yacht clubs and engaging in sailboat races. The North Haven Dinghy, a 14-foot catboat that evolved from the visiting yachtsman’s tender, is the oldest one-design racing class in North America, some say the world. Most of the wooden versions of these boats (a fiberglass version was introduced in the 1980s) were built at North Haven’s J.O. Brown and Sons yard, which was started in the 1880s. On the powerboat front, Anson Corson was a pioneer in the use of fiberglass for the mass production of runabouts in the late 1950s. Dozens of yards have helped Maine hold a worldwide reputation for fine boatbuilding, both in wood and newer epoxy-based materials. 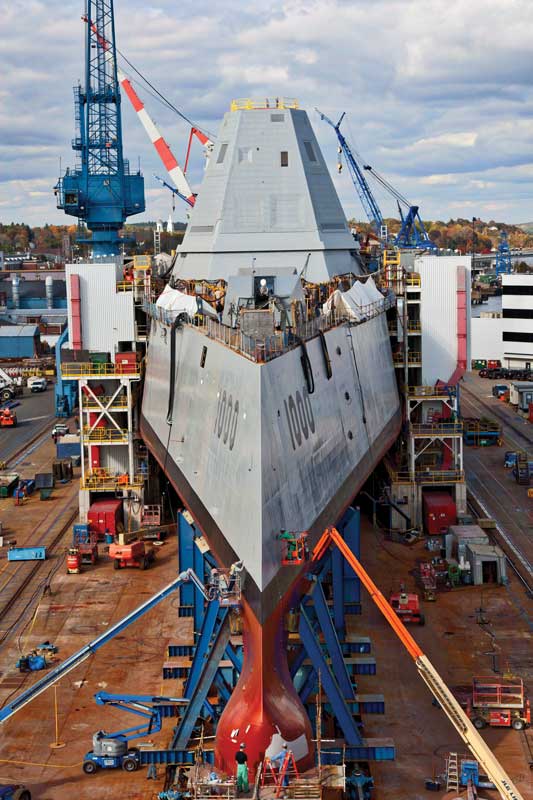 Launched by Bath Iron Works in 2013, the 600-foot Zumwalt is a guided missile destroyer, whose futuristic design and $4.4 billion price tag attracted a lot of attention. But the vessel’s stealth systems make her appear to be very small on a radar—the size of a fishing boat. Courtesy General Dynamics After years of mass-producing wooden boats, the Henry R. Hinckley Co. launched its first fiberglass sailing yacht, the Bermuda 40, in 1959. Hinckley branched out into fast modern powerboats in 1989 and in 1994 introduced its ground-breaking jet-powered “picnic boat,” adding the equally novel concept of joy-stick steering in 1998.

While a number of Maine yards have won worldwide reputations for their fine work in wood, builders in the state also have been at the forefront of introducing new technologies, from the blending of wood and epoxies to build cold-molded hulls, to lightweight but strong carbon fiber.

The University of Maine, which introduced the world’s largest 3D printing machine in 2018, has been at the forefront of work on integrating 3D printing with boat construction. Another innovation in the last few decades has been computer generated design and computer-controlled cutting machines that have simplified the creation of boat parts, as well as the creation of boat kits for home builders. 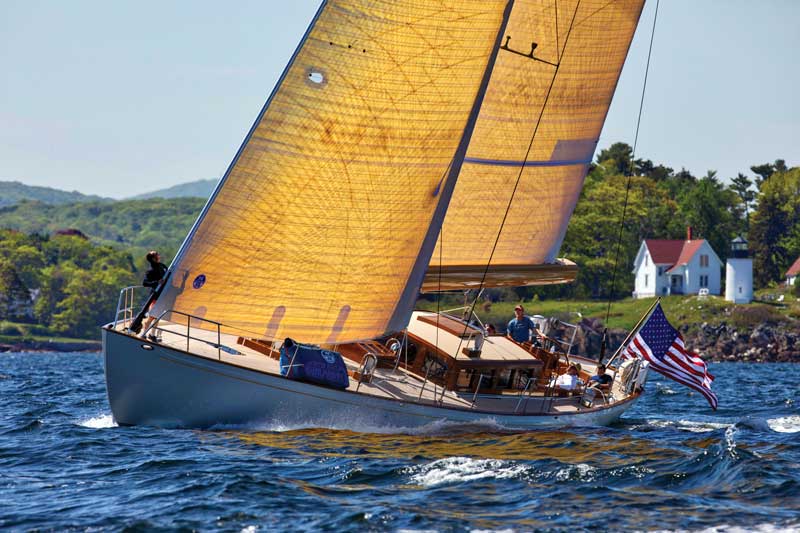 Launched in 2018 by Lyman-Morse in Thomaston, Anna is a 65' cold-molded sloop designed by Stephens Waring Yacht Design of Belfast. Like many contemporary yachts built in Maine in what is known as the “spirit of tradition,” she features modern systems, but classic looks. Photo by Alison Langley
The first English-built ship constructed in North America was the Virginia, a 30-ton pinnace built in 1607 by colonist in Popham, at the mouth of the Kennebec River; a nonprofit has been building a reconstruction in Bath for several years. Since those early days, boatbuilding and related maritime businesses have been a major force both in the state’s economy. In a salute to the men and women who built these vessels, and along with Maine’s reputation for top-notch boats, Maine Boats, Homes & Harbors will host a special exhibit at the Maine Boat & Home Show this August 13-15, 2021 showcasing examples of many of these boats.
✮