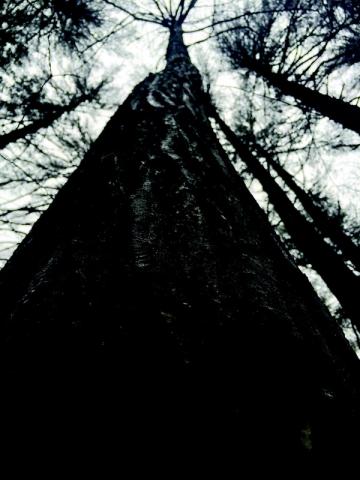 When University of Maine Forest Scientist Brian Roth set out with a graduate student in a small plane last summer to fly over Maine forestland, his goal was to find American Chestnut trees that had survived the chestnut blight.

He succeeded beyond his wildest dream — finding a majestic specimen that was confirmed this week as the tallest American Chestnut in North America. The tree is 115 feet high — taller than most 11 story buildings — and 15.9 feet in diameter. This is huge news for tree lovers. American chestnuts (Castanea dentata) have been ravaged by an invasive blight that kills the trees to the ground. It is estimated that there are only a few dozen large surviving trees such as this one left in the Maine woods.

"Standing next to this tree is really impressive," Roth said.

The next tallest tree is in North America is one in Oregon that is 20 feet shorter, according to the American Chestnut Foundation. The tallest American Chestnut in the world at 121 feet is in an arboretum in Belgium, said Ruth Goodridge, the foundation's director of communications.

The Maine tree is growing in a reserved forest in the town of Lovell on land bequeathed to the University of Maine Foundation.

"We are interested in finding big trees like this that have survived through the blight," Roth said. Scientists hope to learn how this tree and others like it have survived the blight so they can develop blight-resistance varieties.

Last spring, Roth and his colleagues made maps looking at soil and climates most likely to support American Chestnut and scouted those places by plane last July when the chestnut trees produce distinctive clusters of white blooms. This tree stood out right away.

"We knew what we were looking for," Roth said. "We marked the GPS location and went back in October (by foot) to look again. We found it and the rest is history."

In all, the University of Maine researchers found about two dozen chestnut trees, including a dozen growing quite close to the new record holder, he said.

The tree's record-holding height was officially confirmed Dec. 2 by foresters with the Maine Forest Service and the University of Maine, along with representatives from the American Chestnut Foundation.

Once the mighty giants of the eastern forest, American chestnut trees stood up to 100 feet tall, and numbered in the billions. From Maine to Georgia, this tree was a vital component of the eastern forests, providing abundant food for wildlife and serving as an economic staple for humans. In the beginning of the 20th century the fungal pathogen responsible for chestnut blight was accidentally imported from Asia and spread rapidly. By 1950 the fungus had eliminated the American chestnut as a mature forest tree.

In 1983, a committed group of scientists and laymen who wanted to save the species formed The American Chestnut Foundation and initiated a complex breeding program to transfer genes containing disease resistance from Asian chestnut species to American chestnut. The result has been the first generation of trees that are 96% American chestnut but contain Asiatic genes for blight resistance. Now supported by more than 5,000 members and hundreds of volunteers in 23 states, the organization is planting and testing offspring of those trees as it continues to build and improve its breeding population.

The organization's Maine chapter partnered with the University of Maine to find tree such as this one.