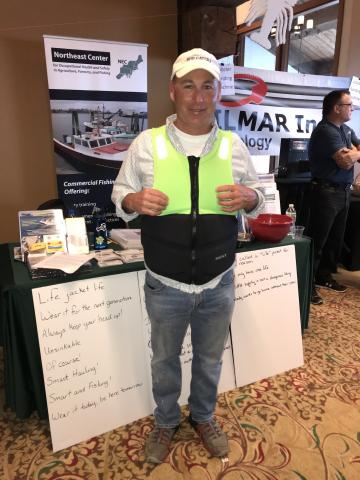 Port Clyde lobsterman Gerry Cushman fell overboard while putting his boat on the mooring after a day of fishing. His foul weather pants were taped to his rubber boots and as he sank they filled with water and pulled him down deeper. Frantically undoing the tape, he was able to free one of the water-filled boots and pull himself to the surface by grabbing a line hanging down from his boat.

He admits he’s really lucky to be alive, especially since he was not wearing a life-jacket. But that was the last time he ever went out fishing without one. Cushman has become such a convert, that he even wore a sleek neon yellow life vest inside during the recent Maine Fishermen’s Forum — he estimates 150 fishermen there asked him about it.

“If I can get someone else thinking about this, then I’ve done my job,” he said.

Over the past year, 181 commercial lobstermen in Maine and Massachusetts participated in a project sponsored by the Northeast Center for Occupational Health and Safety to promote the use of personal flotation devices. Lobstermen who chose to participate in the one-month trial were randomly assigned one of nine life jacket models, and then asked for feedback, including suggesting improvements. That feedback is being used to improve life jacket designs and to get closer to what an ideal life jacket for a lobsterman would be.

In commercial fishing, vessel disasters typically are the leading cause of death, but for lobstermen, it is falling overboard, explained research Coordinator Rebecca Weil — 17 New England lobstermen died this way between 2000-2016, out of 30 overall deaths reported. While fishermen are required to carry Coast Guard-certified life jackets on their boats, they don’t tend to wear them, she said.

“Ideally everyone would be wearing a Coast Guard-approved life jacket that had every bell and whistle,” Weil explained. “However since most lobstermen do not wear the ones they have, we are looking to find what will best meet their working needs.”

The response from fishermen in the study was overwhelming. The majority kept their new PFDs afterward. In the surveys they indicated that a life jacket should be: Comfortable, flat/not bulky, with no straps or buckles to snag, easy to clean, easy to use, bright in color, and for many — integrated into something already worn. Beyond that the preferred style varied widely.

“We anticipated that one or two life jacket designs would be considerably more popular and address most of the barriers to regular use. Instead, we found that personal choice featured strongly in the results,” said Weil. “What is clearly most important is finding what you can, and will, wear comfortably while working. The best life jacket is a life jacket that you will wear consistently.”

The next step is to send two mobile units along the coast in the two states next spring with samples of different lifejackets for more fishermen to try on, and, potentially, buy. In the meantime, manufacturers have received design feedback and have indicated they are already changing designs in response.