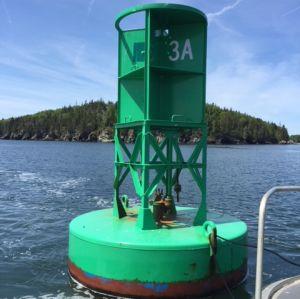 Someone has been stealing the bell and gongs off navigational buoys along the Maine coast and the Coast Guard wants help tracking down the perpetrator(s).

So far, Coast Guard crews charged with maintaining aids to navigation have identified at least seven instances where the noise-making devices have been removed over the past six months, said Lt. Matthew Odom, Coast Guard Sector Northern New England’s waterways management division chief. These bells play a vital role in the safe passage of ships and mariners, he said.

“We know that all the buoys are important for safe navigation and these sound signal are vital to navigators especially in times of reduced visibility,” he said. “This is concerning to us.”

The thefts were first noticed by the crew on a 175-foot buoy tender in the Penobscot Bay region. The crew determined that the bells, which can weigh anywhere from 250-400 pounds and are attached by heavy bolts, were intentionally removed. The most likely scenario is that the high-dollar devices are being stolen and sold to nautical novelty shops or scrap metal yards, Odom said.

Federal officials are working closely with local law enforcement, shops, and scrap yards to identify perpetrators and reclaim the missing property. Tampering with aids to navigation is a federal offense and can lead to fines up to $25,000 per day or up to one year in prison. Anyone with information leading to a conviction are eligible to receive up to one half of the fine imposed.

“These thefts not only reduce the reliability of our aids to navigation system and put lives at risk, but they also create a burden and expense to the tax payer for the buoy tenders and crews responsible for maintaining the aids,” Odem said.

Coast Guard crews are repairing the buoys as quickly as possible, he said. “We can’t do it all at once. We have to wait for new bells to arrive and schedule operations.”

Odom said the buoys missing sound devices include the following:

* Bell FT at the entrance to the Fox Island Thoroughfare, which is used by the North Haven ferry among other mariners;

* Eagle Island Gong 3A, between Eagle and Deer Island;

* Porcupine Ledge Bell No. 3, also between Eagle and Deer islands;

* Little Breaking Ledge Lighted Gong No. 1, which is 5 miles east of Jonesport and marks a hazardous ledge;

* Wheeler Rocks Bell Buoy 1W, which is about a half mile north of Metinic.

Anyone with information regarding the missing sound signaling devices are urged to contact the Sector Northern New England command center at 207-767-0303.

The photo above, which was provided by the Coast Guard, shows a buoy missing its bell.