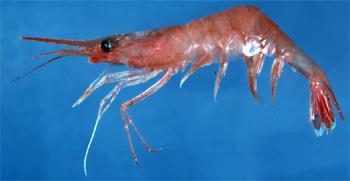 Despite several years with no commercial harvest of northern shrimp, the population of the tiny prawns (Pandalus borealis) remains too low to allow the fishery to be re-opened, fisheries managers rulled this week. The Atlantic States Marine Fisheries Commission's Northern Shrimp Section on Nov. 30 extended its moratorium on commercial fishing for the 2018 fishing season, according to a news release.

The good news for those who like to eat the tiny shrimp is that, as in past years, the section did approve a 13.3 metric ton research set aside, which means a limited amount of shrimp will be available for sale this winter.

Industry members continued to express concern about the economic impacts of the fishery closure, especially in light of a lack of positive signals in terms of stock rebuilding, the release said. Based on these concerns, the Section agreed to include in future discussions the possibility of opening a directed fishery if improvements in stock condition (e.g., strong recruitment or biomass indices) are not realized.

The 2017 Stock Status Report for Gulf of Maine Northern Shrimp indicates abundance and biomass indices for 2012–2017 are the lowest on record of the 34 year time series, with 2017 being the lowest observed. Recruitment since 2011 has been poor and includes the four smallest year classes on record. The recruitment index in 2017 (2016 year class) was the second lowest observed. Current harvestable biomass is mainly comprised of females from the weak 2013 year class and some small, early-maturing females from the below-average 2015 year class.

Recruitment of northern shrimp is related to both spawning biomass and ocean temperatures, with higher spawning biomass and colder temperatures producing stronger recruitment. Ocean temperatures in western Gulf of Maine shrimp habitat have increased over the past decade and reached unprecedented highs within the past several years. While 2014 and 2015 temperatures were cooler, 2016 and 2017 temperatures were again high, and temperature is predicted to continue rising as a result of climate change. This suggests an increasingly inhospitable environment for northern shrimp and the need for strong conservation efforts to help restore and maintain the stock, according to the news release.

The Northern Shrimp Technical Committee considers the stock to be in poor condition with limited prospects for the near future.