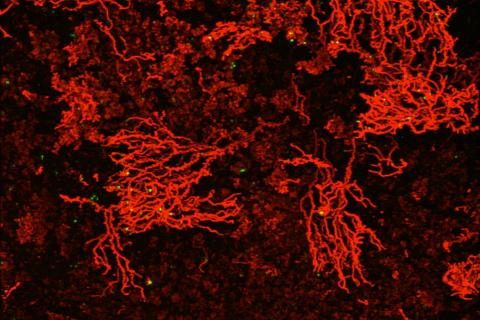 Rust costs the U.S. Defense Department about $23 billion a year. Anytime water and steel meet, it’s only a matter of time until repairs or replacement is necessary. Much of this cost is incurred in marine environments, where ships and infrastructure rust either through chemical processes or bacteria that oxidize the iron found in steel. “Understanding the basic microbiology of this process is a crucial part of figuring out how to mitigate it,” said Adam Mumford, who led a study of microbially driven corrosion for the U.S. Navy as a postdoctoral researcher at Bigelow Laboratory in East Boothbay. The results of the study by Mumford Senior Research Scientist David Emerson were recently published in the journal, Applied and Environmental Microbiology. Previous research conducted at Bigelow Laboratory revealed that iron oxidizing bacteria, which use iron as an energy source, are among the first microorganisms to colonize the surface of steel when it’s put into the ocean. For the Navy project, the scientists designed an experimental setup to examine those early stages of bacterial colonization and determine their corrosive impact. The team submerged pieces of steel into a container of seawater and added an iron oxidizing bacterium called Mariprofundus DIS-1 . The microcosm setup allowed them to simulate environmental conditions and control oxygen levels. The researchers found that while the iron oxidizing bacteria use the iron that’s released from the steel, they don’t directly cause dramatic corrosion. That doesn’t, however, mean those bacteria don’t play a significant role in starting the process. “In the ocean, the initial colonization of steel is by iron oxidizers but other organisms eventually move in and take over,” Emerson said. “We’re not yet certain how the initial colonizers make the steel surface more hospitable, but more damaging bacteria, such as sulfate-reducers, arrive next and can cause rapid pitting and corrosion of the steel.” At least part of the answer seems to lie in the complex microscopic structure the initial colonizers create. As the bacteria process iron, each cell uses the waste to build a unique stalk of metallic and organic matter. These stalks allow the bacteria to slowly move themselves through the environment and maintain a position where they have access to the nutrients they need. They also drastically increase the amount of surface area near the steel and create a new environment ready for colonization by other microbes. “We wanted to get a better look at this important structure,” Emerson said, “but it’s so delicate that just picking up the steel and carefully moving it to a microscope can destroy it.” Mumford designed a special system that held the steel in the test container and enabled him to transfer intact samples to a confocal microscope, which uses a laser to excite fluorescent dyes that scientists add to samples. He stained the bacteria cells green and the iron oxide stalks red. He then used the microscope to create a three-dimensional image of the steel’s surface – revealing the amazing structures this species creates. One of the big surprises of the study was how well this particular species of Mariprofundus did in oxygen-rich seawater. Iron oxidizing bacteria are generally found in very low oxygen environments, like those that may occur near hydrothermal vents on the seafloor. However, the bacteria in Mumford’s work were exposed to fully oxygenated seawater – as is found in the near-surface waters that affect boats and marine infrastructure – and it didn’t seem to slow them down. To understand this newly observed resilience, the researchers sequenced the genome of the bacterium, and found genetic defenses against harmful byproducts that are created when iron and oxygen interact. “This goes counter to what we’ve all been saying about iron oxidizers for a long time,” Emerson said. “This species is well-adapted to life in the fully oxygenated ocean, and it seems to create conditions on the surface of steel that make it easier for other, more corrosive bacteria to live there as well.”