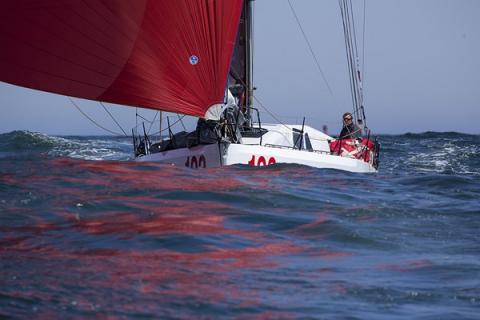 Spanish team, Tales II (shown here), skippered by Gonzalo Botín and Pablo Santurde won the first two legs of the Atlantic Cup, putting them on top of the leaderboard heading into the inshore series. The seven teams competing will each consist of six crew members on board.

To view the race, spectators are encouraged to head to Fort Allen Park on the Eastern Promenade, where the Atlantic Cup festival is also taking place throughout the two day racing series. The festival will feature live music and race commentary, a Pabst Blue Ribbon draft beer truck and beer garden, kid's activity zone, food trucks and local merchants. High-energy, groove-driven quintet, Downeast Soul Coalition will perform June 10 in the Race Village, and R&B, blues and classic rock band, Delta Knights, will perform in the Race Village on June 11; both bands are local to Portland.

"All week, we've had tons of people come to the Maine Wharf to check out the boats, meet the sailors and learn about the Atlantic Cup," said Hugh Piggin, Atlantic Cup Race Director. "Portland has been great to us and we are excited for the inshore series to start; and we look forward to crowning the champion on Saturday!"

With over 1,000nm of ocean racing, the Atlantic Cup is the longest offshore race in the Western Atlantic and is also the U.S.' only short-handed offshore race dedicated to the Class 40. The race started in Charleston, S.C., May 28, stopped in Brooklyn, N.Y., May 31-June 4 and culminates in Portland, Maine, June 6-11.

The Atlantic Cup is, at 1,048 nautical miles, the longest offshore in the Western Atlantic. It started in 2011 as a concept event and grew to a multi-stage race. Since its inception, the Atlantic Cup has aimed to be the most environmentally responsible sailing race in the United States. The race is sailed solely in Class40s, a monohull race boat designed for shorthanded racing.

The Atlantic Cup ran annually in May from 2011 through 2014. After 2014, the race moved to a biennial event. The course in 2011 was a sprint from New York to Newport with an inshore series in Newport. From 2012-2014, the race was a three-stage event that started in Charleston, South Carolina included a stop-over in New York City and finished in Newport, Rhode Island. In 2016, the Atlantic Cup will continue to comprise of three legs, with stop-overs in Charleston, S.C., Brooklyn, N.Y., and for the first time, Portland, Maine.