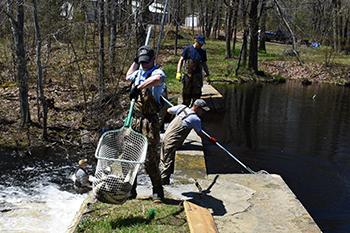 The Maine Department of Marine Resources has been awarded $311,357 from the National Oceanic and Atmospheric Administration’s Species Recovery Grants to States Program to restore Atlantic salmon and river herring in Togus Stream.

Togus Stream, a tributary to the Kennebec River, once supported populations of critically endangered Atlantic salmon, as well as alewives and blueback herring, collectively called river herring. However, construction of barriers has blocked these species from historical habitat for more than 200 years.

“Togus stream has the most and best Atlantic salmon habitat below mainstem dams on the Kennebec River and has the potential to support runs of over 300,000 river herring annually into Togus Pond,” said DMR Sea Run Fisheries Director Sean Ledwin.

“We believe that restoring all these species will lead to more successful Atlantic salmon recovery by reestablishing their ecological roles in relation to each other,” said Ledwin.

The dam, built in 1804, blocked Atlantic salmon and river herring from migrating upstream to historic spawning habitat. To rebuild the river herring population in the pond, DMR staff began stocking it in 2010, and in 2014 began manually transferring returning river herring over the existing dam with hand-held nets to facilitate migration. Two stone dams downstream of the Lower Togus Pond dam that impede fish passage during lower water levels will also be removed as part of the project.

The Department has been working closely with the association of local landowners, the Worromontogus Lake Association, which owns the dam. “We were approached nine years-ago by DMR about this project,” said Gary Schaumburg, Association Vice President. “After a lot of conversation, we agreed it was the right thing to return these fish to their rightful home. Our members have been heavily involved with everything from helping to select a vendor, to designing the fish ladder, acquiring permits, and soliciting grants for a driveway, parking lot and shed pad on the site.”