Who says you have to close the door when you sit?

She wanted to know whether there was something among my scribblings to which she could refer her outhouse-leery  summer visitors for reassurance.

At first, her query made me a bit anxious. I was hesitant to wind up as the presumed expert in local Two-Holer Building Code, or as the go-to person for questions of outhouse legality and privy boilerplate. “Privy boilerplate?” Sounds cold.

After some very cursory research, I satisfied myself that rumors that outhouses had been summarily outlawed were somewhat exaggerated. A web site for a manufacturer of handmade pine outhouses in rural Maine makes the claim that, “A properly constructed outhouse is a joy to use.” I would agree, and, more to the point, the business evidently hasn’t been shut down by the Outhouse Police.

There is much to be said, in a positive way, about a well-kept waterless comfort station. People worry about cold, dark, and spiders. I would suggest that is because people worry in general about cold, dark, and spiders. A good battery-powered wall light and, if conditions are terribly Arctic, a thick pair of winter socks stretched (temporarily) over the two sides of a split-rim toilet seat make it a lot less of an ordeal. Anyway, if it’s that frosty, there is certainly no need to fear any spider. It’s all about maintenance; that, and a well-behaved clientele who exhibit courtesy toward the next user; plus the occasional but conscientious use of some sort of neutralizing substance like lime, peat, or wood chips. 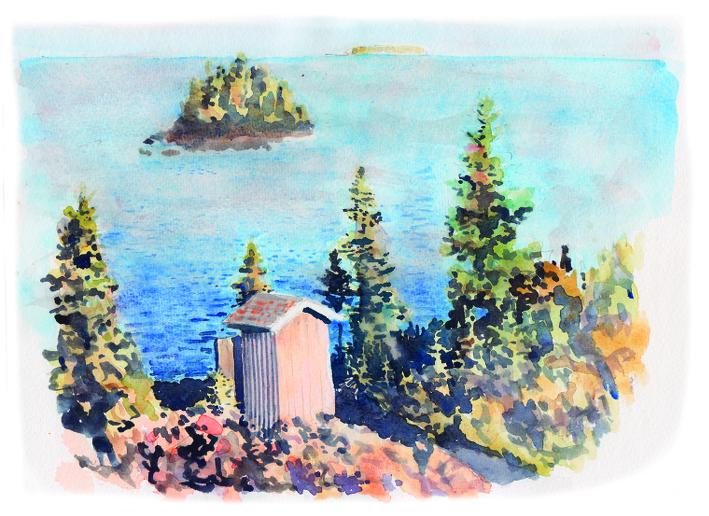 There have been outhouses on this island that offer a lovely prospect of the ocean. People save up for their vacations and travel hundreds of miles to Maine every year for such a view. Who says you have to close the door when you sit?

Back in the mid-1980s, the two-room, lug-your-water camp I occupied as a young and hungry laborer in South Thomaston had a perfectly good outhouse. It came stocked with back issues of National Fisherman. I could read Cap’n Perc Sane’s columns as long as the daylight held out.

Unfortunately, it turned out that “my” outhouse was a few feet over the property line, a detail that the abutting land-owner wished to resolve. We (Scott, the property owner; me, the tenant; and Doug, another friend who got shanghaied into helping) were obligated to move the outhouse. It might be said (in fact, it was said) that you haven’t lived until you have moved an outhouse. I have seen it done two ways: by hand and by backhoe. This unit in South Thomaston was in the woods, so bringing in equipment would have required an extensive logging operation. Scott, who built the thing, observed optimistically at the time, “It just takes a lot of chicken hitches.” A whole lot of chicken hitches. We pulled it along, upright, very slowly, with a long length of rope. We hauled on it, re-rigged it with more hitches and loops for mechanical advantage, pulled some more, and re-rigged it again, until we had hauled it safely to our side of the line.

Easier by far is hoisting an outhouse with a backhoe. I have seen an outhouse motoring down the main road of Matinicus Island at a jaunty angle, high in the air, in the bucket of Danny’s backhoe. It was headed for service at a remote beach wedding, and resembled nothing so much as a parade float. Don’t ask too many questions on that one.

Readers of these lines may recall a previous offering having to do with the unexpected discovery of a hand grenade on Matinicus. Where might an island fire warden store a hand grenade until proper disposal can be arranged? That’s right: securely under lock and key in the backhouse.

Despite what you may have heard, I have never seen an actual, in-use outhouse get maliciously tipped, by the way. You will read no stories about such shenanigans here. I did learn, in my research into local one-room school history for my book Island Schoolhouse, about the Bad Boys of the past (some of whom have grown up to run for a selectman and such). They’d get a big laugh out of tossing a cherry bomb firework under the outhouse while their teacher was at rest inside. Such stories, told with a twinkling eye, are an honored part of island lore.

It has become almost a point of pride on this island how some Internet subscribers make the observation that they have “high-speed wireless and an outhouse.” It is not for me to name names.

Not everybody has the best of luck with an outhouse, however. We had one burn to the waterline, as it were, a few years back. Somebody hurrying to leave the island scrambled quickly through the list of housekeeping chores for the rented cottage and innocently dumped the wood stove ashes down the outhouse hole immediately before departing on the last flight of the day. A tiny ember, theretofore unnoticed, ignited a piece of T.P., and next thing we knew they had to bring out the fire truck.

Of course, an outhouse has the potential to be quite refined. Not many years ago, 12 ladies of a respectable age on this island disrobed discreetly behind the rosebushes to create a fund-raising calendar for the island church. One of them was photographed reading the New York Times Review of Books while seated comfortably on a one-holer, the privy door cast wide open to admit the summer sun and twinkling blue ocean breeze. And back when I was a student at the University of Maine at Orono, I had a classmate, a grandmotherly commuter student named Philippa from Orrington or Eddington or Beddington or somewhere, who mentioned having a crystal chandelier in her outhouse. We were provided no details on whether it was wired for electricity.

Back to the legal fine print: in the interest of journalistic professionalism I felt obliged to perform a quick Internet survey prior to responding to my friend’s original inquiry. I typed in the question, “Are outhouses legal in Maine?” just to see what would come up. The result included screeds by several cranks who raged that any municipality requiring a free man to install a septic system is plotting to “tax” the people into helpless submission. Yup, maybe we do need to worry that the Black Helicopters are coming for our outhouses.

That actually might be the best way to move one, should the need arise again.

Eva Murray lives year-round on Matinicus Island. Her latest book, Island Schoolhouse: One Room for All (Tilbury House), was published in September 2012.