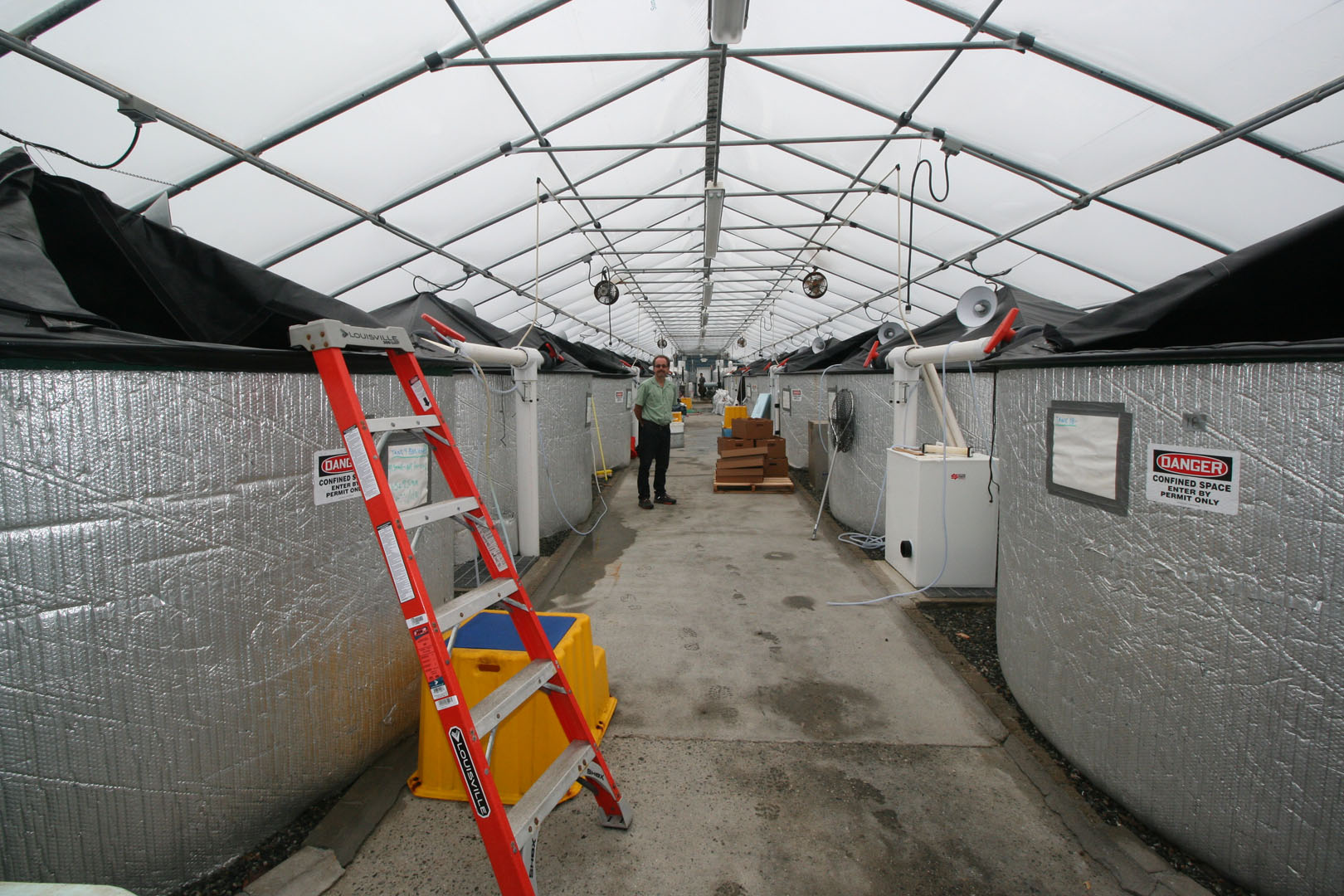 At the University of Maine’s Center for Cooperative Aquaculture Research in Franklin, each of these tanks holds 3,800 gallons of seawater, part of CCAR’s continuing exploration of recirculating aquaculture systems. UM has partnered with Dutch company Kingfish Zeeland to develop yellowtail (Seriola) aquaculture at a site in Jonesport. Photo by Laurie Schreiber

“Clean, cold, high-oxygen, fast-moving water”—that’s what trout need in order to thrive. I’m talking with Jacob Pelkey, marketing manager of Micmac Farms, an impressive installation where some 40,000 lively, fat native Maine trout gracefully dart and swoop through 34,000 gallons of constantly recirculating water. These are Salvelinus fontinalis, Eastern brook trout. You could almost imagine they’re in one of those legendary trout streams in the North Woods where Pelkey’s ancestors trapped trout for the Micmacs’ traditional table. In fact they’re swimming in a pair of long oval tanks called race tracks (because that’s what they look like) in a recent construction right beside Route One between Caribou and Presque Isle.

At Micmac Farms in Caribou, native Maine brook trout are raised to market size. Marketing manager Jacob Pelkey says the Aroostook Band of Micmacs encourages local people to tour the farm to understand the concept of recirculating aquaculture and see how trout are raised naturally, with no chemical inputs. Photo courtesy Micmac Farms.

This is an RAS, which stands for recirculating aquaculture system, and it is somewhat revolutionary, although the basic idea has been around for a while.

Water for Micmac’s tanks comes from wells on tribal land. The outflow helps irrigate fields of vegetables on an adjacent farm. The solid matter that is filtered out is composted into fertilizer. Photo courtesy Micmac Farms

Land-based fish farming has an ancient history. The Chinese built fish ponds back in the 5th century BCE, and there’s archeological evidence of some indigenous American groups constructing artificial holding tanks for raising fish. The Aroostook Band of Micmacs, of which Pelkey is a member, is carrying this one step further toward sustainability with their recirculating system, which works just like a swimming pool, the water constantly recycling through. The water filling the tanks comes from wells on tribal property, with around 1,000 gallons drawn daily to replace what gets discharged in the process. Whether intake or outflow, the water undergoes biofiltering, microfiltering, and ultraviolet radiation (a.k.a. sunshine) to cleanse it. It’s a holistic system—the outflow helps irrigate fields of leeks, tomatoes, fresh herbs, and other vegetables on an adjacent farm; the solid matter that is filtered out, “fish poop,” in Pelkey’s words, is composted into fertilizer. “It isn’t waste at all,” Pelkey explained. “It’s another resource.” 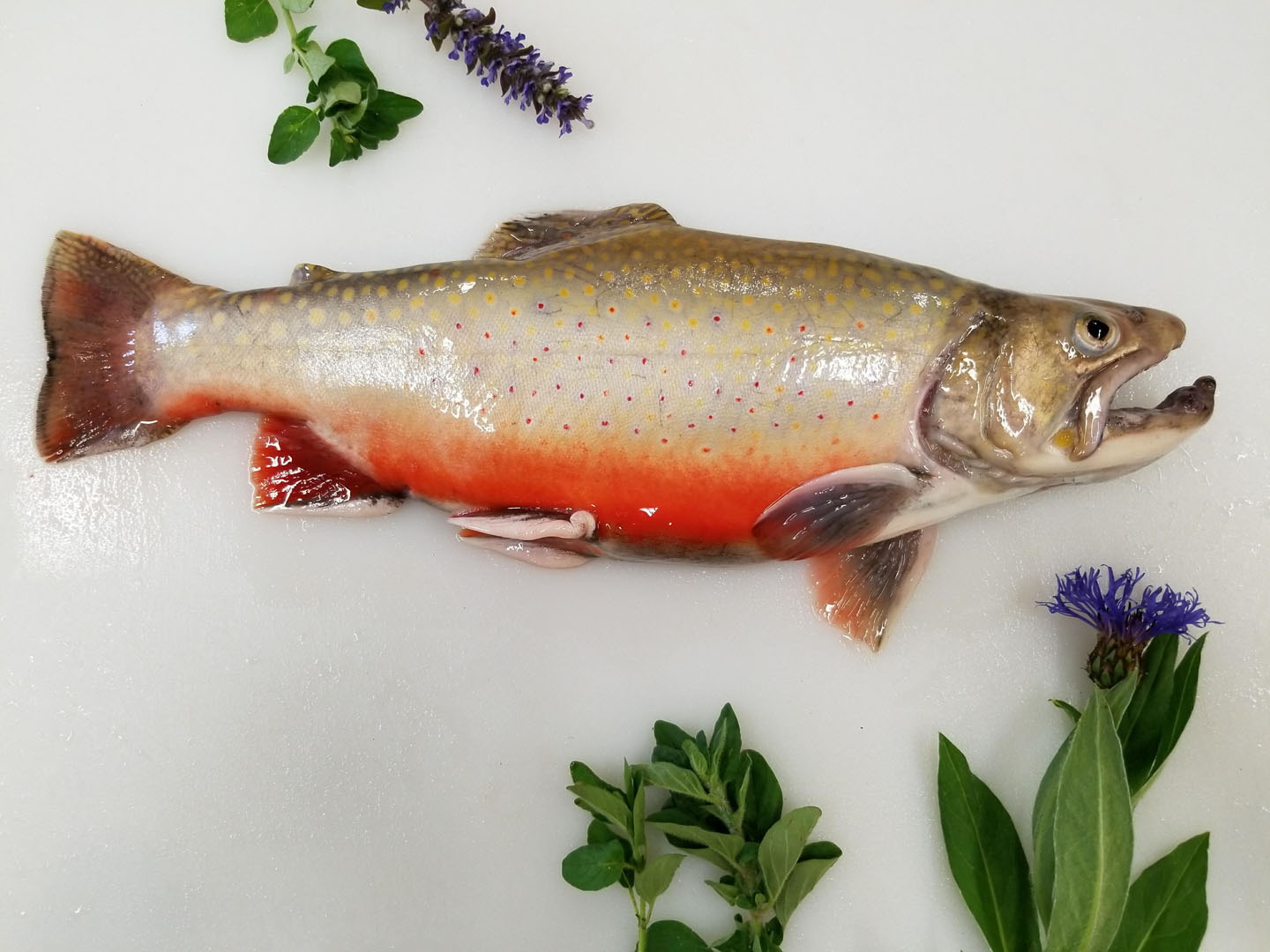 Three years ago, Micmac Farms sent their first trout off to market. Pelkey said that keeping up with the demand since then has been hard. I can understand the allure—I’ve had one of these trout at a local restaurant, where it was served grilled. This was superb eating, meaty, tender, sweet, and made more appealing by the fact that the trout originated from eggs collected in the Nesowadnehunk, a pure, heritage stream in the remote Dead Waters of Baxter State Park. This is wilderness-to-table, courtesy of Micmac Farms.

Maine brook trout ‘sac fry’ at Micmac Farms hatchery. Orange-yellow sacs around young fish provide nutrition for the first few weeks before hatchlings can swim on their own. These fish eggs come from a Maine State Hatchery in Enfield. At this stage the fish are just 2 cm. (about ¾ inch) long. Photo courtesy Micmac Farms

If aquaculture has trends, then RAS is the latest, hottest trend; it is popping up in many parts of Maine:

These are all substantially larger and more industrial operations than Micmac Farms, with much larger ambitions. Nordic projects to sell 33,000 metric tons annually once they are up and fully operational, while Whole Oceans expects to reach 20,000 tons. Kingfish Zeeland is relatively modest by comparison, with 6,000 tons predicted.

There are obvious advantages to the RAS method when compared to net-pen farming in open waters. Clearly, the kind of strict control of intake and outflow that a closed system permits is an important tool for resolving many perceived environmental problems of fish farming—whether they involve feed, medications, or effluent discharge—and its impact on the biome.

On the other hand, there are disadvantages, most especially the kind of potential disruption when a major industry is introduced into a small community with a contained economy that is relatively untouched by the global marketplace. This seems to be one of the problems in Belfast where a vociferous group has opposed Nordic’s plans and delayed the project. But in Bucksport, which is still reeling from its abandonment by Verso five years ago, the opportunity that a new enterprise presented was quickly supported. What may happen in Jonesport is not clear, although, so far at least, the very small town (population 1,333) has responded enthusiastically.

There’s one other, somewhat unlikely candidate for RAS in Maine. 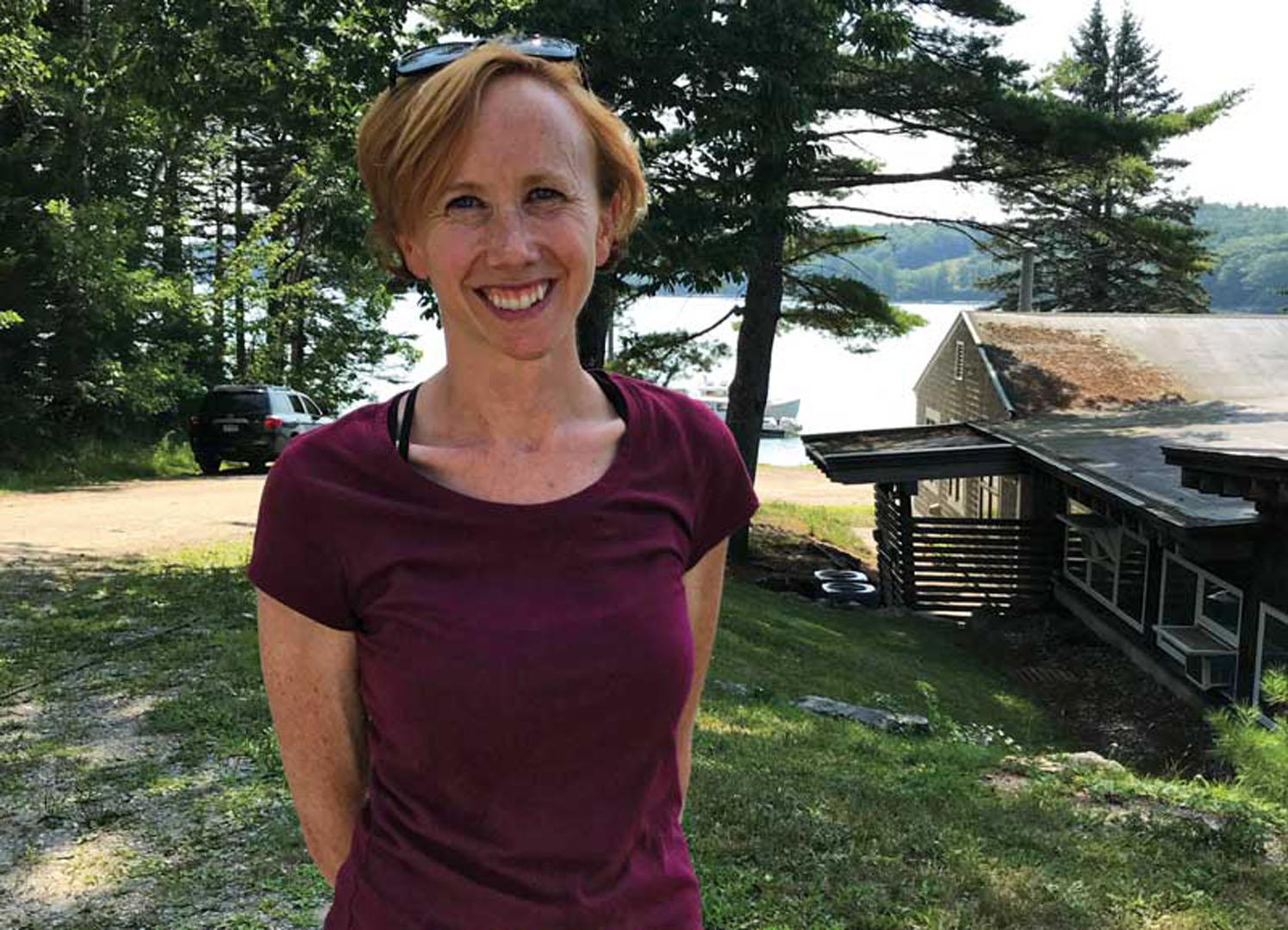 Sara Rademaker has been raising American eels from Maine-caught elvers, at a land-based facility in Waldoboro. Photo by Nancy Harmon Jenkins

That is Sara Rademaker and her project, American Unagi. Currently, eels get harvested in Maine as elvers, shipped to China to grow to maturity, then to Japan to be turned into delicious unagi kabayaki, then are shipped back here to sushi restaurants all over the country. There is a high carbon cost to that system. Rademaker’s idea, which she is carrying to fruition with an RAS facility in Waldoboro, is to cut out all those middlemen and simply raise Maine eels in Maine for Maine consumers—along with anyone from away who wants to join the party. 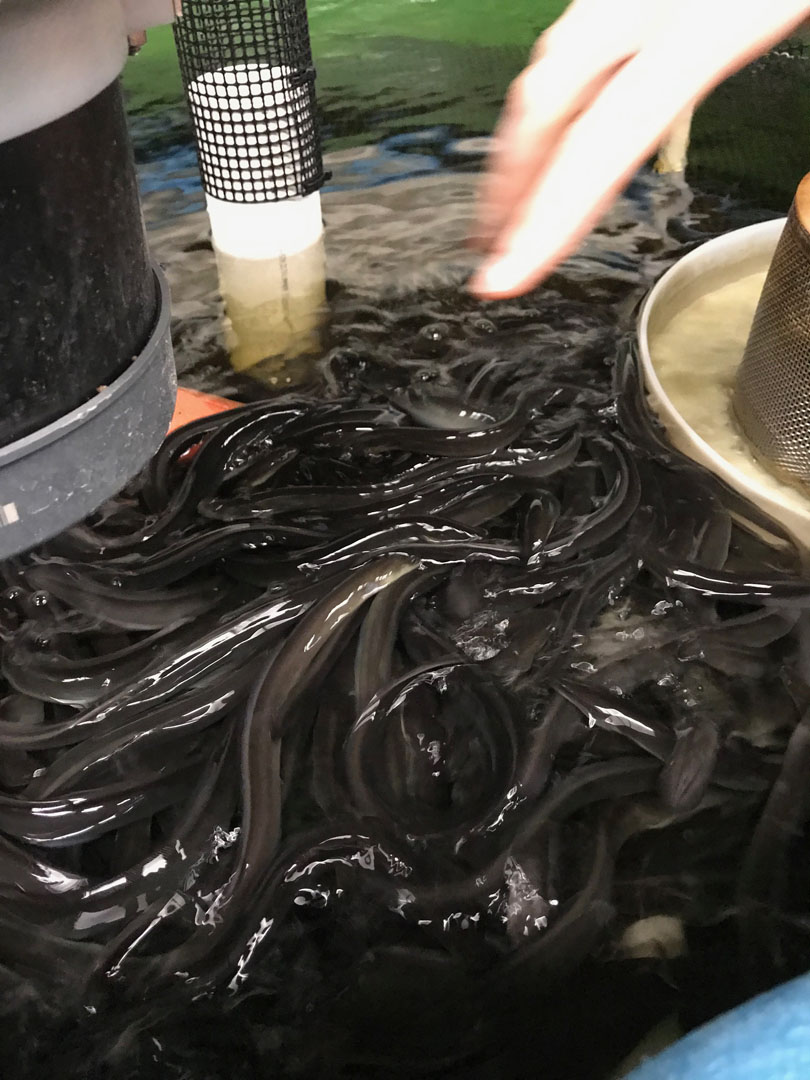 The U.S. imports 5,000 metric tons of eels a year, most of it for restaurants. Rademaker hopes her home-grown eels, shown here, can replace some of those imports. Photo by Nancy Harmon Jenkins

Is there a market for eels? The United States imports an astonishing 5,000 metric tons of eel annually, Rademaker said, most of it ready-processed for sushi bars and restaurants. With her new operation she hopes to be up to 120 metric tons by the end of next year—and ready to make a dent in that China trade.

Why this sudden surge in RAS systems? And why Maine? The answers are actually quite obvious: Aquaculture is indeed the wave of the future for seafood as markets continue to grow and access to the wild harvest diminishes. And RAS aquaculture promises, at least initially, fewer environmental consequences than net pens in the open ocean (this is more so for finfish than for shellfish).

And why Maine? Access to clean water, whether salt or fresh, is a big part of Maine’s appeal, as is access to large tracts of land, whether undeveloped or abandoned, on which to build what can be pretty large infrastructures. An even greater appeal is Maine’s easy access to markets, especially major East Coast markets from Boston south to Miami. Trucking a load of fresh fish from Belfast or Bucksport to Boston is a lot faster, cheaper, and environmentally efficient than flying that same load from southern Chile, a Scottish loch, or a Norwegian fjord.

Perhaps the greatest appeal of all, and this applies to all aspects of aquaculture, is the reputation, the character of Mainers, a population of people who are accustomed to working hard, who know their way around boats and the water, and who aren’t afraid of a challenge. I go back to what oyster farmer Bill Mook told me. Challenges, he said, are opportunities  and there are huge opportunities in aquaculture for Maine.

“Eel of Fortune” at https://maineboats.com/print/issue-158/eel-fortune