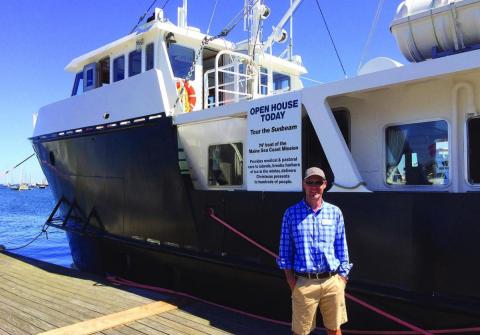 Sunbeam Captain Michael Johnson said the boat will make its last island visit April 25 and then head to Front Street Shipyard next month after a week to ten day decommissioning period in Northeast Harbor. Some of Front Street Shipyard’s work can be done while the boat’s in the water. It’s probably going to be hauled, taken out of the water in mid-May,” Capt. Johnson said.

Five Maine yards had bid on the $1 million-plus project.

“The thesis of the refit work is basically to gain access to the below deck areas,” Johnson explained. “Steel boats rust from the inside out. A lot of those areas are difficult to access. There’s no major hull degradation. But we need to address it now before there is.”

The work will involve removing the entire accommodations section of the boat, sand blasting the steel, and painting two coats of marine epoxy on the internal sections — “Every nook and cranny,” said Johnson. “Unless you rip out the entire downstairs area you’re going to miss something, and that’s going to haunt you for years.”

Once the Sunbeam’s insides are removed, Johnson explained, “it’s also a great opportunity to cosmetically upgrade the boat.” All of the Sunbeam “dated equipment and dated cosmetics” will be replaced and updated, incuding the wheelhouse, bunk houses, galley, and salon.

The Sunbeam V, is 75-feet long with a beam of 21 feet and a seven foot draft. It was built by Washburn and Doughty in East Boothbay, Maine, and launched in 1995. The boat is equipped with state-of-the-art telemedicine equipment and has a salon that serves as a meeting place for fellowship, meals, and meetings. The Sunbeam also sometimes hosts weddings and funerals.

“The boat’s fundamentally sound and serves us well,” said Johnson. The refitting “is the best choice going forward to get another 15, 20 to 25 years out of the Sunbeam,” he said. “We’re hoping to have the boat back in service by Christmas.”

“The vessel has had a critical role in the health and well-being of Maine island communities for almost a quarter century, and we’re honored to contribute to that ongoing mission through this refit. Having the opportunity to update and upgrade the capabilities of Sunbeam V will have a direct benefit to our fellow Mainers, which makes us all proud,” Turner said.

While the Sunbeam is on the hard, Engineer Storey King will captain the Mission’s interim boat, Moonbeam, so Sunbeam crew members Sharon Daley, Douglas Cornman, and Jillian can continue their work as Island Health Director, Island Outreach Director, and Steward in the Sunbeam V’s absence.

Johnson recorded a video explaining the refit project. It can be seen here: https://youtu.be/akiP_lMWYuA

Caption: Johnson stands in front of the Sunbeam during a visit to the Maine Boat & Home Show in Rockland.