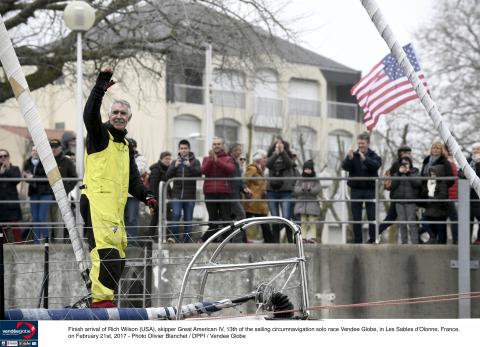 He did it. Hats off to American skipper Rich Wilson, who crossed the finish line of the Vendée Globe solo round the world race Tuesday, February 21, 2017, after 107 days 48 minutes, 18 seconds at sea. He crossed the line off Les Sables d'Olonne on the west coast of France at 1250 hours UTC, placing 13th in the fleet of 29 boats that started the 27,440-mile, singlehanded race from Les Sables d'Olonne on Sunday Nov. 6. 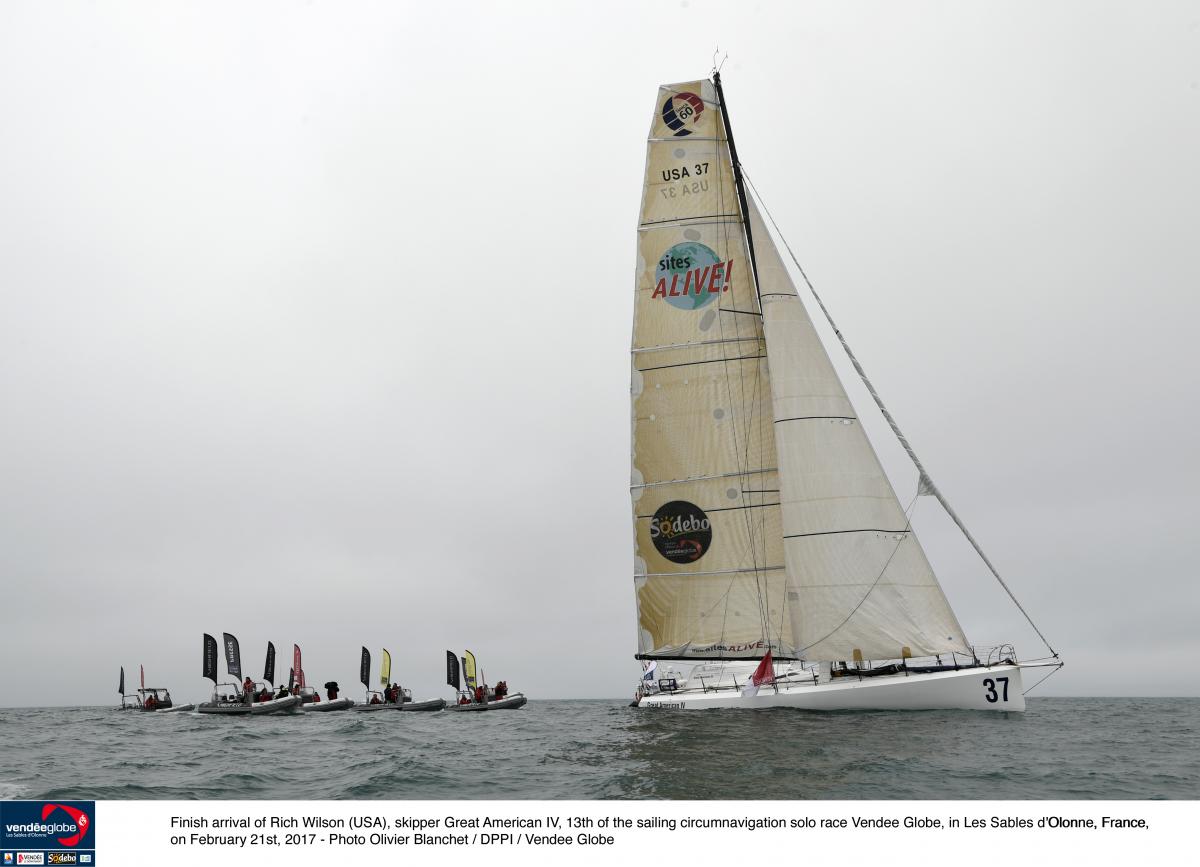 "It's great to be back. To see France and all the French people here,” Wilson said after his finish. This marks Wilson’s second successful completion of this grueling solo circumnavigation. He beat his previous time from the 2008-9 race by 14 days. At 66, he was the oldest skipper in the race. Sailing a boat that had been refit at Portland’s Maine Yacht Center, he had said his purpose in the race was to promote sailing and inspire more than 750,000 school children in 55 countries that were following his progress online. 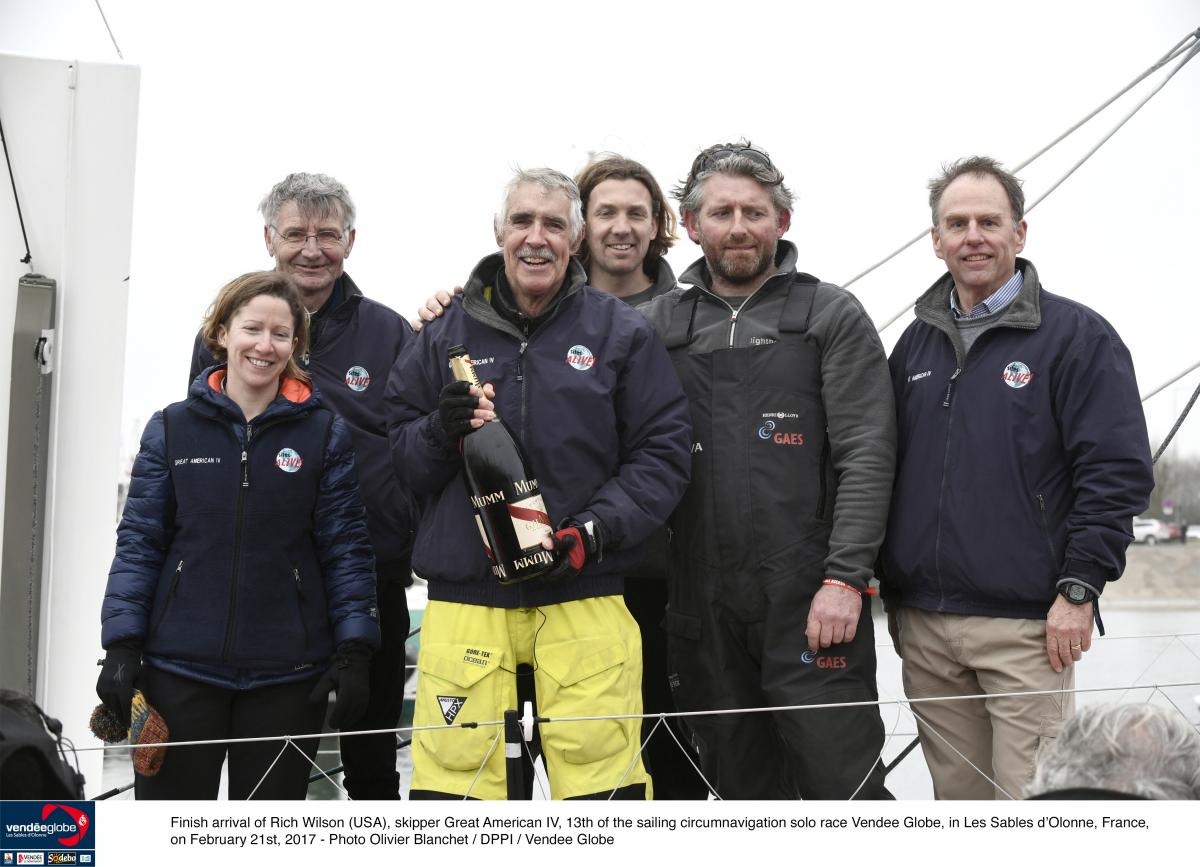 “It was a little bit harder, because I'm older,” he conceded after finishing, noting that each day he did an average 12,000 turns in the winch. “My goal was to finish this race and to work for SitesAlive, which has 700,000 young people following.” He added, “What is fantastic about this race is the support of the public with all the people here. I remember the first time, someone said, if you finish the race, you're a winner. I think that is correct."

The hardest part of the race, Wilson said was the grey skies. “What distinguished the race for me was that it was grey all the way. Across the south and then all the way up the Atlantic. Grey. Grey. It was so depressing. Four or five days ago, the sun came out for twenty minutes and I leapt out and stuck my face and hands under the sun. It was grey and just for so long. That was hard,” he said. “I had a map of the stars with me but I couldn't use it. The best thing was communicating with the others. We're a real community." 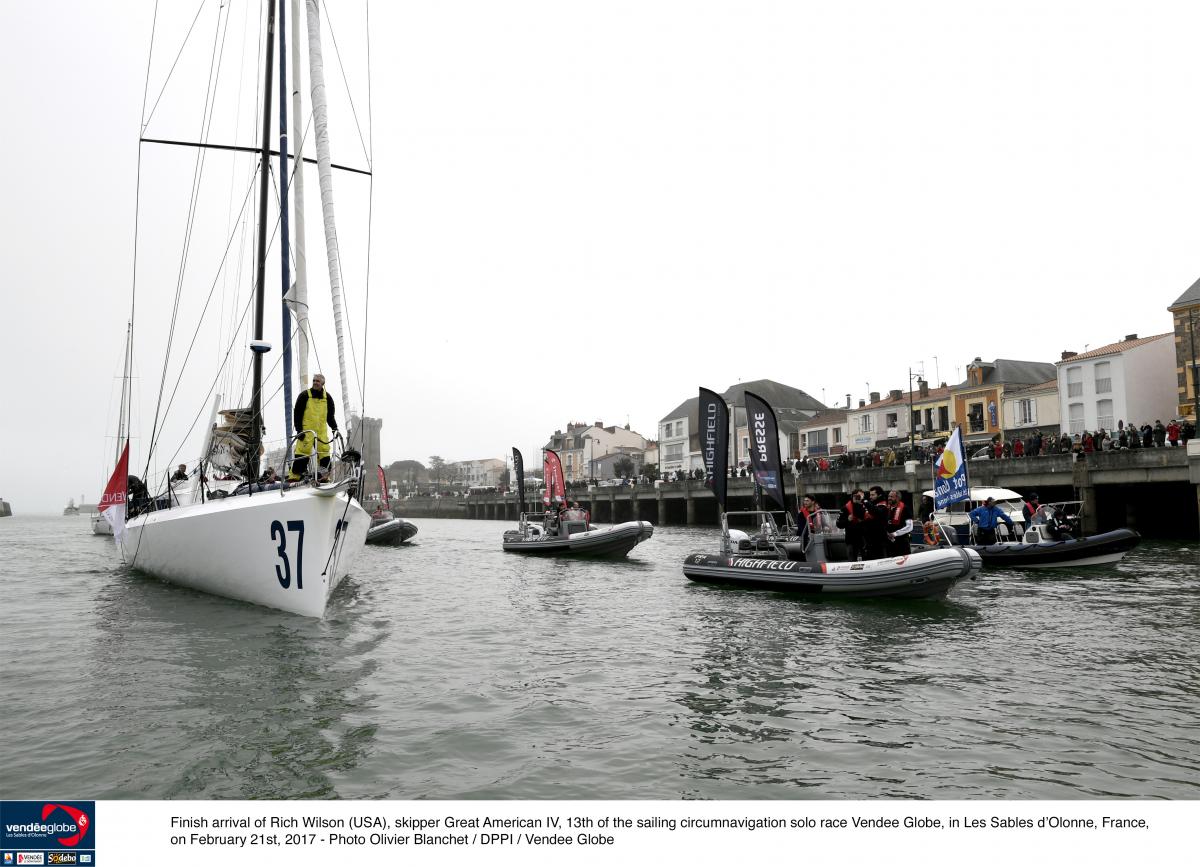 A hugely experienced skipper, Wilson, who comes from Boston, is a lifelong mariner whose achievements include three record passages including San Francisco to Boston in 1993, New York to Melbourne in 2001, and in 2003 Hong Kong to New York.

Wilson crossed the finish line on a cool February afternoon, emerging from the grey skies of the Bay of Biscay, with scarcely a rope out of place. His Great American IV returned to Les Sables d'Olonne in almost exactly the same, near perfect condition as when it left in early November.

To finish two Vendée Globe races with both of his boats in great condition is testament to his impeccable seamanship, his ongoing focus and discipline to stay within the prudent protocols he sets himself, looking to achieve high average speeds and sail very efficiently while keeping the skipper and his boat safe, race organizers said in a release.

The efficiency of his actual course, that is how direct a route he sailed, is almost exactly the same as that of race winner Armel Le Cléac'h. Wilson sailed around 27,450 miles — a distance bettered only by the fourth to sixth placed skippers Jéremie Beyou, Yann Eliès and Jean Le Cam who sailed around 300 miles less.

Wilson is in no way a crusader looking to prove a point about the capabilities or achievements of older solo racers or athletes. “I am not ready for the pipe and slippers. Age is just a number,” he said many times before the start. That said his success should inspire older people around the world to pursue their dreams and follow their passions.

A former math teacher with graduate degrees from Harvard Business School and MIT and a college degree from Harvard, Wilson posted regular, informative accounts of his race. Here are a few highlights:

7th Nov: Replacement of a batten car on the main mast track, sailed with conservative sail selection not wanting to make a mistake while tired. Hydrogenerator propeller pitch control pump leaked all of its hydraulic oil into the box.

12th Nov: In a squall the boat took off, and then the autopilot decided to stop. So the boat turned up toward the wind, and lay over at about 45 degrees, with both sails flapping. I rushed into the cockpit and grabbed the tiller. Unidentified autopilot problem fixed.

24th Nov: Getting to know the boat well. Gained miles on those ahead. Nice chat with Tanguy de Lamotte.

1st Dec: Peak speed of 24.7 knots. “I don't understand how the leaders can deal with the speeds, and the stress that comes with them”

13th Dec: “Pushing very hard to get east across the top of the Kerguelen Shelf before the big depression gets here in 36 hours. Our plan is to then head southeast to get to where the strong winds will be.

15th Dec: Average of 45 knots wind for a 16 hour period, and our thundering sprints of boat speed from 10-12 knots into the mid-20s, ricocheting off waves

21st Dec: “Fantastic encounter today when my friend Eric Bellion came roaring up from behind us and passed us close aboard”

25th Dec: “We are a long way from home, and have a long way to go. Usually in my voyages, I haven't gotten too lonely. But today I did. I'm sure it was exacerbated by the big depression that is forecast to develop ahead of us.”

1st Jan: “We are in the gale. We have 35-40 knots of wind now and it looks as though this will last for another 18 hours. The violence that the sea can heap on a boat is not describable.”

5th Jan: “the nicest day of sailing that we've had in one might say months”

7th Jan: Exactly halfway 13th Jan: “We were in the bulls-eye of the strong winds for the depression. Solent to staysail to storm jib, and 1 reef to 2 reefs to 3 reefs in the mainsail.” Autopilot malfunction.

22nd Jan: “A very bad night last night. We had 35 knots of north, steady, up to 38, which created a big wave situation, with cresting seas 12-15′ high. This went on most of the afternoon. And then suddenly, nothing. The physicality of this boat is beyond description, and I am exhausted and, frankly, demoralized.”

29th Jan: “Latitude of Rio de Janeiro. Southwest winds, 2 – 3 knots, very bizarre. The boat went in circles for 3 hours, and it was very frustrating.” 5th Feb: back into the Northern Hemisphere