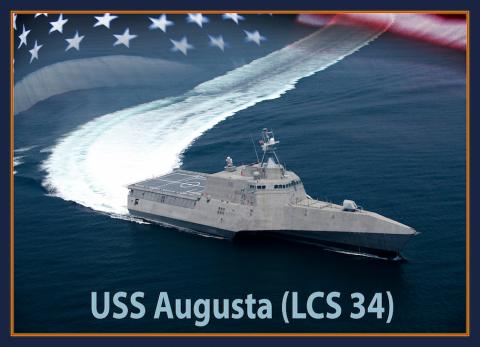 The next Independence-variant Littoral Combat Ship will be named USS Augusta (LCS 34) in honor of the capital city of Maine, Secretary of the Navy Richard V. Spencer announced Feb. 1.

“It is an honor to name the next Independence variant LCS after the city Augusta,” Spencer said in a press release. “From the earliest days of the American Revolution to every conflict since, the citizens of Maine have been an important part of the Navy and Marine Corps team. I am pleased that a future ship will carry on that tradition of service by bearing the name and history of their great capital city.”

The announcement was released on the same day that Spencer was scheduled to be in Maine to attend a keel laying ceremony for a Navy destroyer under construction at Bath Iron Works. The Arleigh Burke guided missile Flight IIA destroyer being built at the Maine yard will be 513 feet long and 66 feet wide. Her crew size will be just over 300 sailors. It is scheduled to be commissioned in 2020.

The future USS Augusta, the sixth Navy vessel to bear the name Augusta, will be built by Austal USA in Mobile, Ala. This ship will be 419 feet long with a beam of 104 feet and be capable of operating at speeds in excess of 40 knots.

The LCS is a highly maneuverable, lethal and adaptable ship, designed to support focused mine countermeasures, anti-submarine warfare and surface warfare missions. LCS integrates new technology and capability to affordably support current and future mission capability from deep water to the littorals.