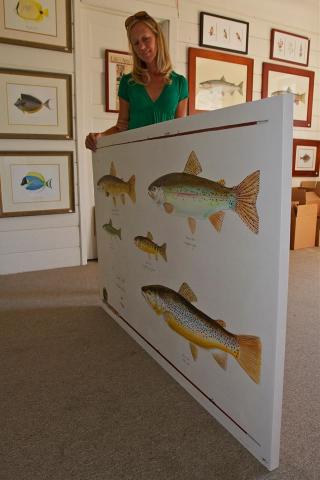 Talbot, an award-winning scientific illustrator and artist, will host an opening for an exhibit of the original paintings for the calendar at the Karen Talbot Art Gallery on Thursday night (February 2nd) from 5 to 8 pm. The show is open to the public free of charge. Complimentary food and drink will be provided, and signed copies of the calendar will be available at no cost during the event.

The original paintings and prints are for sale with a portion of the proceeds going to The Nature Conservancy of Maine to benefit habitat restoration efforts in the Penobscot River and Bay watershed. Diadromous fishes spend part of their life in fresh water and part in salt water.

Talbot works in a variety of media, including watercolor, pen & ink and acrylic. An avid angler and diver, she has documented a large number of North American fishes based on her own fieldwork and work with specimens. An ardent conservationist, the tagline of her business is “Conservation through Appreciation,” and she donates a portion of proceeds to organizations that help protect and restore the habitat in which the subjects of her art live. In 2013, she was honored with the Artist of the Year award at the Maine Sportsman’s Show. She opened the Karen Talbot Art Gallery in Rockland in 2013.

The calendar was produced in partnership with NOAA Fisheries Greater Atlantic Regional Office and The Nature Conservancy, with funding from NOAA’s Habitat Blueprint for the Penobscot River.