U.S. sailor in Vendee Globe has rounded the Cape of Good Hope 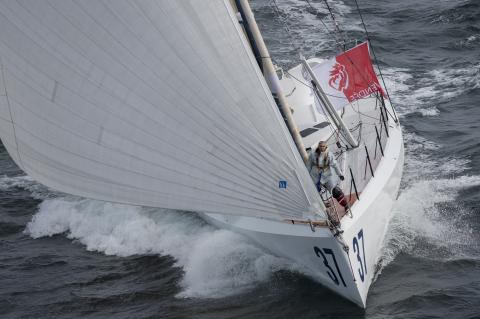 US sailor Rich Wilson has rounded the Cape of Good Hope at the bottom of South Africa and is heading towards Australia in the Vendée Globe race. Wilson, the only American in the single-handed round-the-world race, is now lying in 17th position, behind the leader, Armel Le Cléac’h. Wilson's IMOCA 60 Great American IV was refit for the race at the Maine Yacht Center in Yarmouth.

Suffering from severe asthma since childhood, he is at 66 the oldest skipper in the fleet. Of the 29 skippers who left Les Sables d’Olonne in western France on November 6, six have already withdrawn with due to damage or equipment problems. Wilson, who has been at sea for 30 days, crossed the Prime Meridian on December 2 and is now sailing in the Indian Ocean.

Wilson’s progress in the race is being followed by school kids in 26 countries around the world who read his daily ships logs and listen to his podcasts on the website for his educational program SitesALIVE! Teachers use the Ocean Challenge Live! curriculum, available for free and published in four languages, and students send questions to Wilson and his Team of Experts throughout the race. Outside the school program, he is being followed closely by fans in 22 additional countries.

The hardest and most famous sailing race in the world, the Vendée Globe involves sailing 28,000 miles around the world alone, with no stops and without assistance. It sets sail and finishes in Les Sables d’Olonne in France after rounding the Cape of Good Hope in South Africa, Cape Leeuwin in Southern Australia and the infamous Cape Horn at the tip of South America.

Wilson’s motivation to participate in the race is to engage and educate students around the world, through his live educational program. With degrees from Harvard, MIT and Harvard Business School, Wilson was a math teacher in the Boston school system when he realized that kids really paid attention when he confronted them with real world experiences. “Excite a kid with bats, bugs, and snakes in the rainforest, or with gales, flying fish, and dolphins at sea, and they will pay attention not knowing what will happen next,” Wilson said. “Then the science, geography, and math flow freely.”