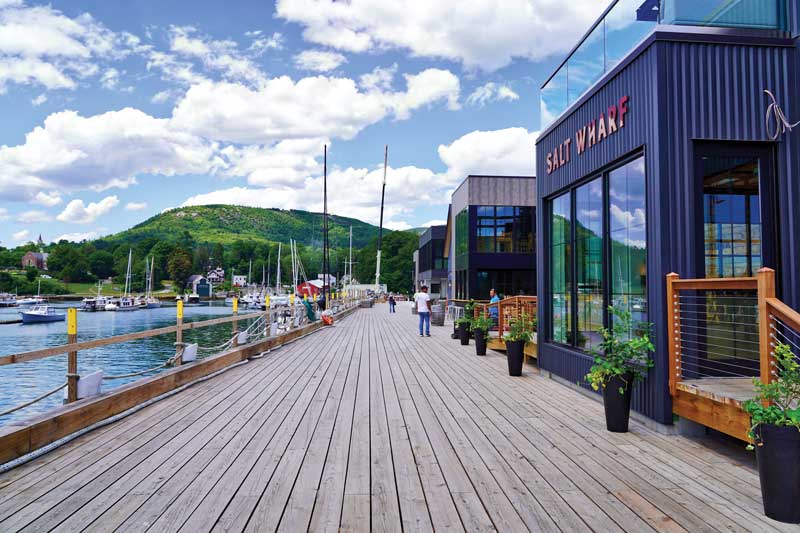 The old boardwalk has been expanded from 6 to 20 feet. In addition to the boatbuilding side of operations, the new buildings include two restaurants and a handful of separate retail and office spaces.

We settle into overstuffed lounge chairs under a big umbrella on the deck at the newly rebuilt Lyman-Morse Camden complex on the east side of Camden’s inner harbor. I’m chatting with Drew Lyman, Lyman-Morse president, and Josh Moore, special projects coordinator, to learn about the company’s ground-up rebuild of the venerable yard, and the devastating fire that prompted it. Tell me the story, I say. “Well,” Lyman quips, “It was a dark and stormy night…” and then he breaks into laughter.

“Actually, our game plan all along was to make improvements to the Bean yard, adding storage for boats and dockage in the outer harbor slowly, over time. That’s where we were heading,” Lyman said. All that changed June 13, 2020 when, at 1 a.m., Lyman received a call from Seacoast Security reporting a fire warning. In the darkness, he drove down to the yard. “Nobody was on site, and I immediately smelled an electrical fire. And when I looked at the Rhumbline Restaurant, the smoke was billowing out of it. I knew this was the real deal,” he recalled.

It took the company about a week to assess the damage and come to the realization that the aging property, some of the buildings reportedly dating back to World War II, was simply not worth repairing. The decision was made to start with a clean slate. The Falls Church, VA-based design firm GreenSpur was hired to conceptualize the total property rebuild. In the meantime, the existing buildings were demolished even before a contractor had been hired. “We knew there was a time-line issue, and we wanted to have our folks back in their shops within two years,” Lyman explained. Demolition was completed in January of 2021, and ground was broken by the general contractor, Augusta’s Lajoie Brothers, two months later. 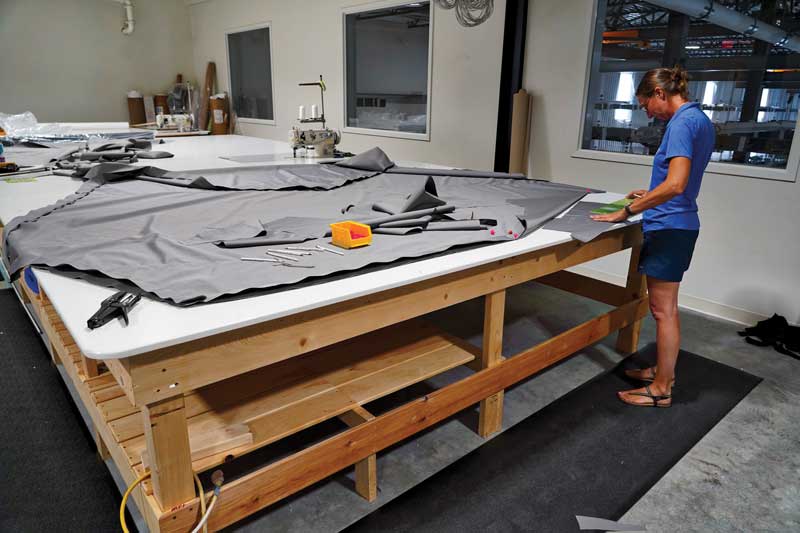 Workshops for the yard’s boatbuilding side were connected and revamped, including a big open space with a high ceiling for the rigging shop (below) and a canvas shop, where an employee was constructing a dodger on a recent afternoon. 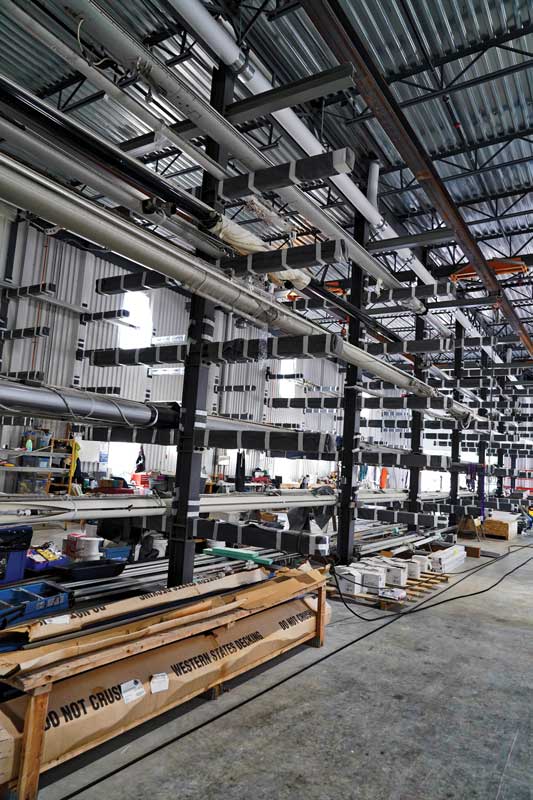 The vision was to recreate what the company had before the fire—only vastly improved, Lyman said. “We now have world-class services in world-class facilities: one of the best rig shops in the world, and top-notch carpentry, canvas, electrical and mechanical shops.”

The new complex includes 34,000 square feet of marine service and mixed-use commercial space along the waterfront. A series of connected structures features huge metal framed windows and several peaked roofs, mimicking a village street, along a wooden boardwalk that runs the length of the property. The width of the boardwalk was increased to 20 feet from 6 feet in the original facility. The siding shifts between shingles and black corrugated metal enhancing the feel of separate structures rather than one monolithic façade. In addition, the tall 10,000-square-foot Building 1 behind the new structures was completely rebuilt.

Lyman-Morse’s fabrication division did all of the metal work on the project, including staircases. But the rest of the job fell to the general contractor. And it wasn’t easy, Lyman said. “It’s an industrial boatyard with high-end residential, class A office and retail space, plus two restaurants, all on different elevations,” he said. “It was challenging for Lajoie; we really tested them. In the end they did a great job.”

The facility, which Lyman-Morse bought from Wayfarer Marine in 2015,  originally had two small, one-person offices that were leased out to area business people. The new facility increased that to five spaces, as well as a new 1,200-square-foot space suitable for a variety of uses, and three 800-square-foot retail spaces that open onto the busy boardwalk. New to the site are three rental sleeping units, which can be used by boat crews or owners. The bedrooms with their ensuite bathrooms share a cozy kitchen and living area. 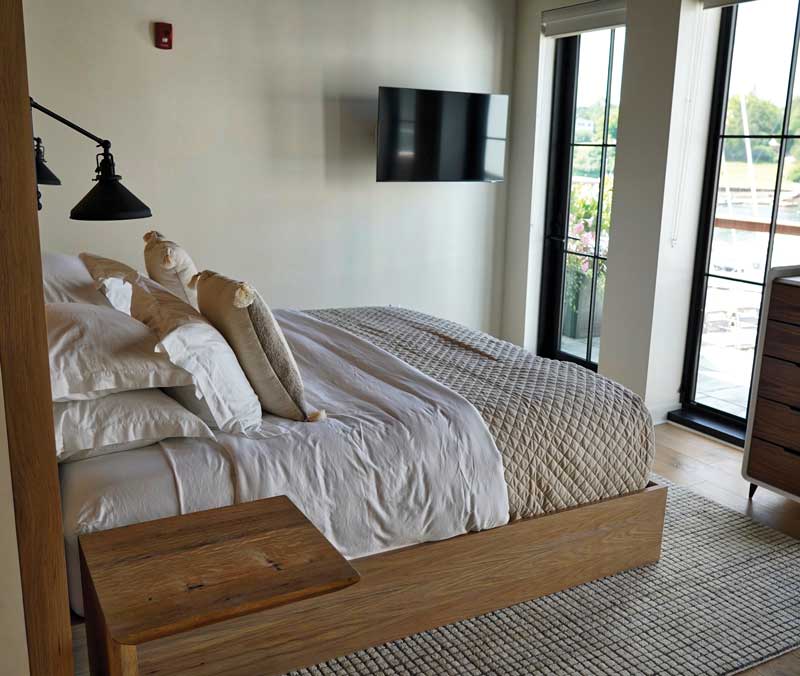 The rebuild included the addition of three rental units where crews and boat owners can stay. Private rooms with ensuite bathrooms open into a shared kitchen and living space.

“Most of the bigger yards have housing available for crew when the boats are there for extensive work. We’ve designed the crew accommodations with custom beds that can be separated to bunk several crew members at a time, if necessary,” Lyman said.

The customer lounge, in addition to the usual shower and toilet facilities, includes two private day-office spaces. All the service managers’ offices open on to a shared hallway that is connected to the various specialty areas. 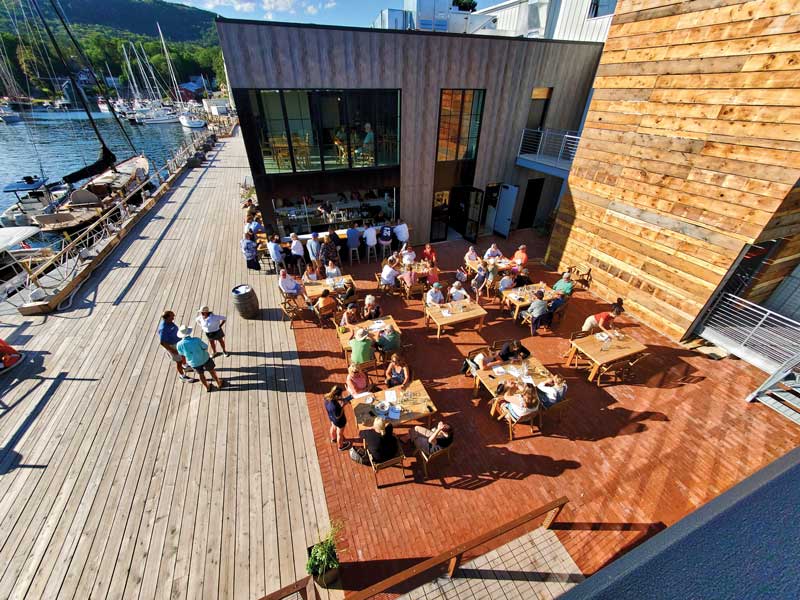 Outside dining at the Blue Barren Distillery and Restaraunt, seen from the rooftop bar at Salt Wharf Restaurant. Photo by Ted Hugger

The property is now also home to the Blue Barren Distillery & Restaurant and the Salt Wharf Restaurant & Bar, two important cogs in the strategy for the marina and boatyard. Lyman has a personal stake in the Salt Wharf restaurant. “I wanted to bring something different to the area, with a variety of different menus.” The chef tasked with bringing it all together is Chris Pierce. “He’s a wonderfully talented guy who is doing a really great job. We’re saying ‘Seafood Forward’ or ‘Sea to Table’ to pick up on the cliché. But we’re focusing on locally sourced and sustainable seafood and fresh local ingredients,” Lyman explained.

Lyman’s wife, Mackenzie Lyman, oversaw the interior design of the Salt Wharf space, the apartments, offices, and other spaces. “We started out with the broad GreenSpur concept. Mackenzie took that foundation and developed an interior design that does an amazing job setting the tone for the Camden waterfront restaurant,” Lyman said.

The restaurants are important amenities, as they are intertwined with all the various enterprises on the sprawling site.

The goal was to create an energy and a vibe to attract boat owners and their crews. “By creating a whole scene for captains, crews, and owners, the yard will thrive,” Lyman said. He calls the concept “feeding the boat side.” The idea is that a combination of marina activities, restaurants, retailers, office spaces, and boatyard services will create an exciting environment and more work will be generated for the boatyard.

“When I show the property to prospective tenants,” Moore said, “I tell them ‘You’re in an active boatyard. Right outside your retail shop door, you might have a mast being rolled by on its way to the crane to be stepped, or riggers and electricians coming and going, while boats are docking and fueling, and the launch runs back and forth, and the restaurants and pub bustle with customers.’”

The energy that the combination of these activities brings to the waterfront ultimately, as Lyman said, will feed the boat side. He argued the concept presents a new model for boatyards.

“The thing I’ve strived to do is in line with what my father and mother have always done,” he said, referring to his parents, Cabot and Heidi Lyman, who started the original yard in Thomaston, Maine, where the company still builds and maintains boats. The senior Lymans held all their endeavors to high standards, including the aesthetics of their businesses and how they meld within their respective communities. “Look at what they did with the 250 Main Hotel in Rockland,” Drew Lyman explained, referring to the Lyman’s boutique hotel, “and how every building in the Thomaston yard is shingled instead of sheet metal siding.”

One goal of the rebuild was to avoid a monolithic look. The facade, seen here from the other side of Camden Harbor, includes different paint colors and siding materials.

The fire forced the company to postpone its plans for rebuilding and improving the buildings in the former Bean yard on the other side of the public landing. Those plans, which include the construction of a wave-attenuating dock with 1,000 feet of frontage, are the next phase in Lyman’s vision of “feeding the boat side.”

Ted Hugger moors his 53-year-old Grand Banks 32 in Southport, and owns the Cedar Crest Inn in Camden with his wife, Jill.