Designing homes to be efficient, durable, and comfortable 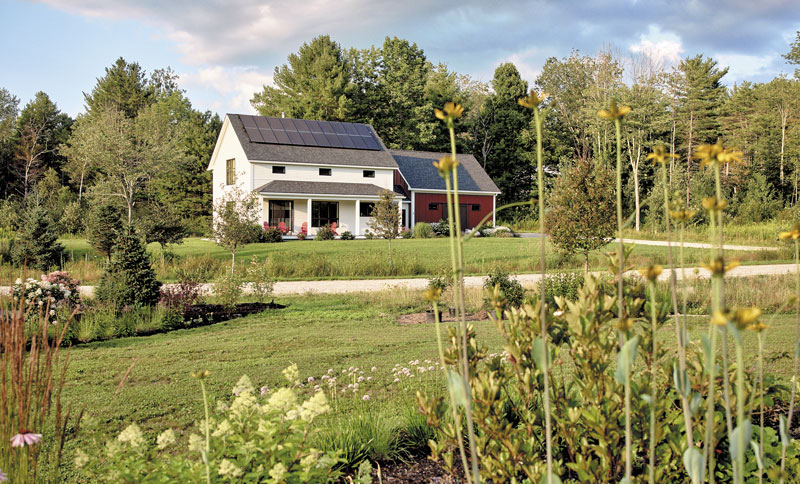 This home was the first built in a five-lot subdivision of solar-powered homes designed by Emily Mottram.

Launching a new architecture firm is a daunting prospect in the best of times, but when Emily Mottram hung out her shingle it was far from the best of times. That was 2009, in the depths of the Great Recession. “At the time, it was considered ‘gainfully unemployed’ to be an architect,” she said recently, “because the market was just terrible.”

In hindsight, though, her timing couldn’t have been better. “There was a bunch of government funding and rebates for people making improvements to their houses,” said Mottram, who supplemented her design work by doing home energy consulting. She embraced the side gig as something of a postgraduate seminar, “learning as much as I could about energy efficiency, insulation, how to build, and the science behind building—which they don’t teach you in architecture school.” 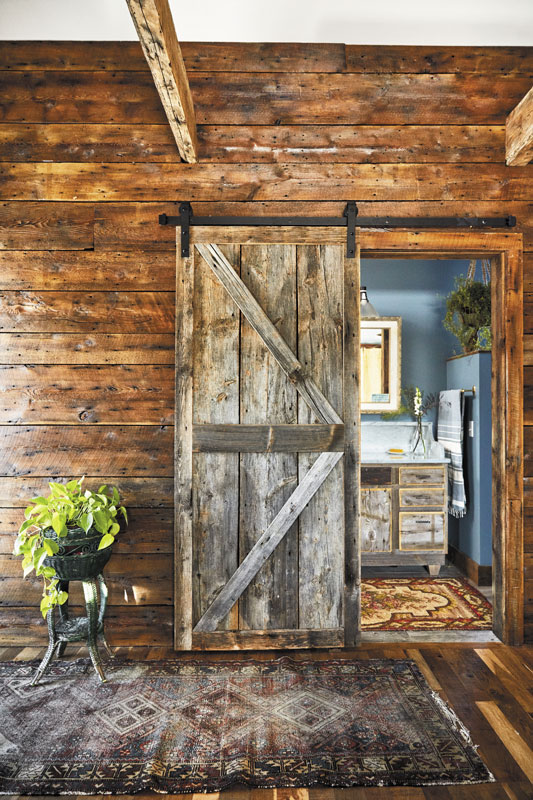 This house features a mix of vintage and reused materials. The timbers were salvaged from Bowdoin College, and antique single-pane windows were used on interior walls to transfer light between spaces. The super-insulated structure has 20 solar panels on the roof. The lessons Mottram learned would become the core of her budding architectural practice. “It gave me a great opportunity to get into a bunch of different styles of houses, see how they were built, and learn how buildings work. It was really a deep dive into how houses function. I had always thought there has to be a better way—to design energy performance into the building, not figure out how to make it efficient after you’ve designed it,” said Mottram. She found kindred spirits in a group of design and construction pros engaged in the same endeavor. “Performance Building Supply, in Portland, was hosting a monthly building science discussion group,” Mottram said. “You could go there and learn from other people in the field”—about materials, construction practices, the physics behind building performance—“and have discussions and debate. That really opened a whole network of other builders and architects and designers in Maine who were doing better things.”

Making buildings that are dry, comfortable, and durable is a project as old as civilization, but what we now call building science got its start with the oil embargo of the 1970s, when spiking energy prices spurred architects and builders to understand and quantify how buildings actually work—and don’t work. Leveraging advances in material science, computer modeling, and remote sensing, researchers spent the following decades developing the concept of the building as a system and, along with it, the potential to manage the energy a building consumes and the moisture and fresh air that move through it. 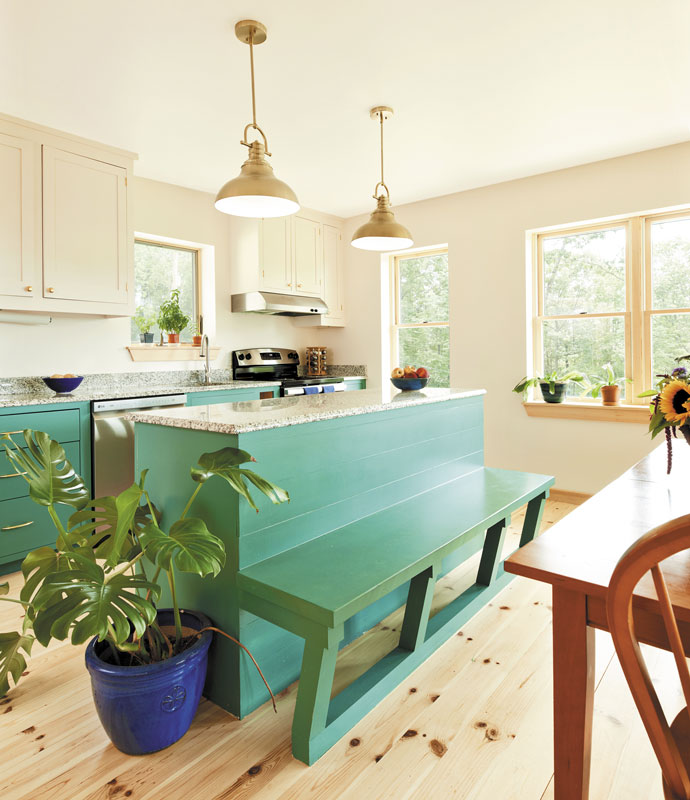 Mottram designed this house, in Denmark, Maine, for a client who wanted to avoid exposure to harmful chemicals, minimizing the use of plywood, plastic, and petroleum-based products.

By the time Mottram came on the scene, the leading edge of the field had been staked out by Passive House, LEED (Leadership in Energy and Environmental Design), and the AIA Living Building Challenge, programs that certify buildings as meeting prescribed performance and sustainability targets. The Portland discussion group gave due credit to the programs, but with reservations. “There were a lot of people who wanted to build better things, but not necessarily have to meet a bunch of program requirements,” Mottram explained. In addition to the expense and complexity they added to projects, these requirements could be an awkward fit for older buildings.

In 2011, local builder and group moderator Dan Kolbert posed a challenge to his colleagues: How can we incorporate the lessons of building science and real-world experience to fill the gap between those gold-standard programs and the outdated building codes that were the next rung down on the
ladder? Out of that simple question emerged The Pretty Good House (see sidebar), an open-source framework for balancing cost and performance that quickly lit up the online discussion boards, spawned an actual movement, and remains Mottram’s north star for optimizing the performance of every project her firm designs.

Rather than a prescriptive system, The Pretty Good House comprises a flexible framework for organizing and prioritizing design decisions. And as she was contributing to its development, Mottram began applying Pretty Good House thinking to address her clients’ requirements, their budgets, and the unique environment of their home state.

The low-hanging fruit often turned out to be not adding insulation, but rather eliminating air leakage. “Air sealing measures are usually the cheapest and easiest thing to do,” said Mottram. “If you just build a code-standard house but spend a little more time on the air-sealing details—a little more time with a caulking gun and [installing] a fully adhered, taped membrane—that makes a significant improvement.” Another important step was ditching traditional fiberglass wall insulation in favor of the more airtight dense-pack cellulose. “Fiberglass is an all right material if it’s in a vacuum,” Mottram explained, “but as soon as it has air movement through it, it’s more of a filter and less of an insulation.” 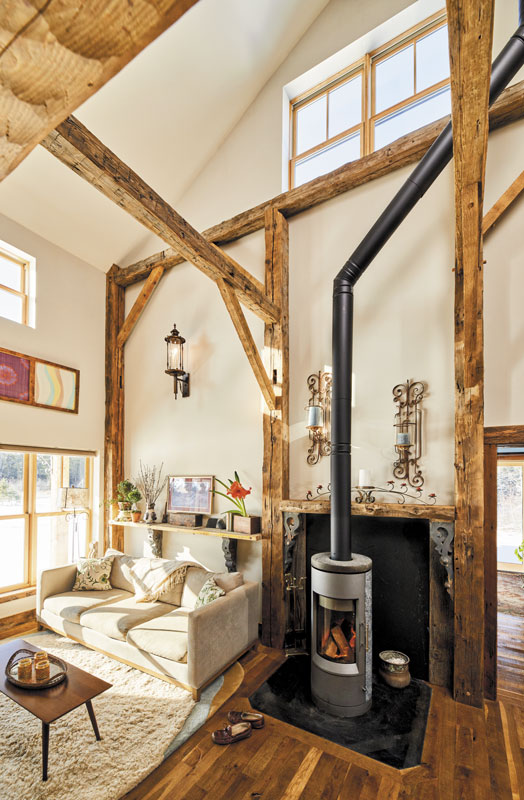 This house features a mix of vintage and reused materials. The timbers were salvaged from Bowdoin College, and antique single-pane windows were used on interior walls to transfer light between spaces. The super-insulated structure has 20 solar panels on the roof. Tight houses can’t depend on random gaps for ventilation, so another essential element on The Pretty Good House checklist is a heat- or energy-recovery ventilation system. The house may be built as much as possible with locally produced, nontoxic materials—another Pretty Good principle—but breathing and cooking still happen, as does the buildup of toxins in the air. “And with so many people working from home now, you have to think about the carbon dioxide levels in these houses. Somebody goes into what was the spare bedroom, closes the door, and stays in that room for eight or twelve hours,” Mottram said. “Fresh air ventilation is critically important.”

Mottram’s work is finely tuned not only to climate, site, and client lifestyle, but also to Maine’s deep-rooted regional architecture, which is based on simple, additive building forms, good proportion, and “things that the ancient Romans knew, like orienting your house to the south, that we started to ignore when energy prices were low,” she said. The resulting updated vernacular calls to mind a retro-modern sailing craft whose classic sheer and overhangs grace a high-tech hull with a modern shape below the waterline.

And as with boats, performance standards for buildings continue to advance. The heightened threat of climate change has spurred Mottram and her Pretty Good colleagues to broaden their definition of carbon footprint to include not only the emissions that result from heating, cooling, and lighting a building—its operational carbon—but also those associated with constructing it in the first place. That means reducing or eliminating high-carbon materials like concrete and plastic foam insulation and prioritizing the use of wood, which sequesters carbon, keeping it out of the atmosphere for the life of the building.

The field’s continuous development suits Mottram, who considers herself “a lifelong student.” She might also qualify as a building science evangelist. Mottram teaches sustainable design at Southern Maine Community College and cohosts a YouTube channel, the *BS and Beer Show (*the BS is for building science), which boasts some 1,500 followers.

Her day job involves a significant component of education as well. “We’ll walk through the reasons why [clients] might want to switch from a double-pane window to a triple-pane window. I don’t get on my soapbox, because it’s best to convince them it was their idea to start with,” she said. But after a dozen years in the business, clients now seek her out because they want to have that discussion. “They’re coming to me because they’re at least asking the questions,” Mottram said.

Bruce Snider is a building designer and architecture writer who lives in Belfast. 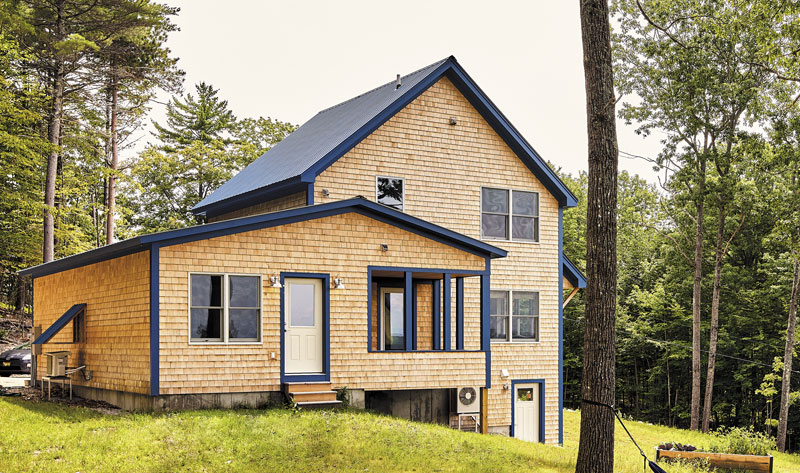 The cedar shingles for this low-chemical home were cut locally. The homeowner supplied the concrete contractor with a soy-based release agent to use with the foundation forms instead of typical petroleum-based products.

Portland’s monthly Building Science Discussion Group may not have a flashy name, but it spawned a regional brand anyway. The project began in 2011, when local builder and group founder Dan Kolbert challenged his colleagues to agree on a list of affordable, environmentally responsible best practices for residential construction. Was there a practical middle ground between effective but costly certification programs like Passive House and LEED and the bare minimum required by law? Discussion and debate ensued, the whiteboard filled up, and a concept was born: The Pretty Good House. “From there, it just kind of took off,”
Kolbert said. “Online, mostly.”

Palermo-based architural designer Mike Maines fleshed out the concept in a long-running blog on the Green Building Advisor website, preserving the flexibility of the original framework while incorporating input from a nationwide corps of followers.

Rather than a set of prescribed practices, The Pretty Good House offers a flow-chart of considerations and principles—plus a few key metrics—for solving the complex equation of client desire, budget, technology, and environmental ethics. “It’s like a decision tree,” Kolbert said. “If you’re doing this, you should consider these three things, five things, whatever.”

Now compiled online at prettygoodhouse.com, the program combines a basic primer on building science with straightforward guidance on both nuts-and-bolts topics—the building shell; windows, doors, and other materials; mechanical and electrical systems—and such higher-level considerations as assembling an effective owner/designer/builder team, verifying that the building performs as designed, understanding the impact of occupant behavior on performance, and—crucially—balancing the costs and benefits of every decision. 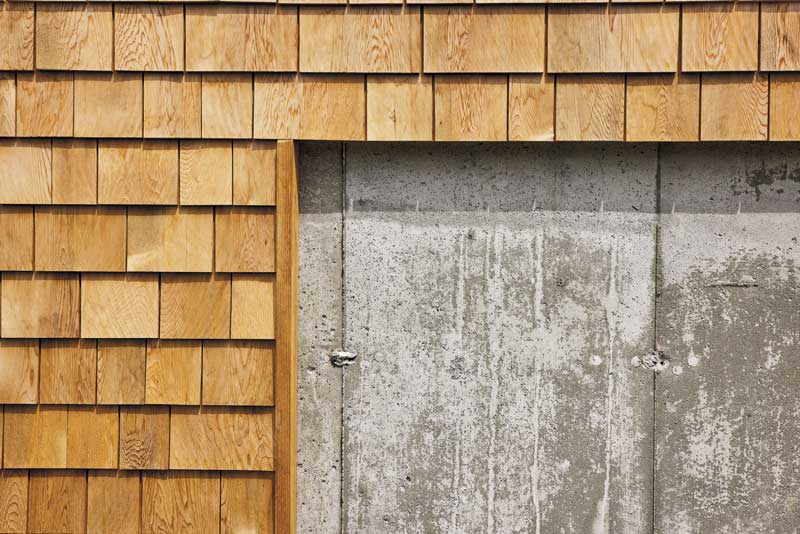 Since its unplanned genesis, The Pretty Good House has spawned a steady stream of journal articles and builder-conference seminars and gained a devoted following in New England and beyond. Soon it will be the subject of book by Kolbert, Maines, architect Chris Briley, and Cumberland-based architect Emily Mottram: The Pretty Good House, scheduled for publication by Taunton Press in the spring of 2022.

While The Pretty Good House concept was born in discussions among self-avowed building science nerds, Kolbert believes the book will also appeal to homeowners who want the most efficient, durable, and environmentally responsible house they can afford. “This stuff is a lot more approachable than people think,” he said. “I want to spread the idea that it’s not some arcane, mystical, knowledge overseen by a priestly class. A designer/builder/owner team that’s sincerely interested in learning can do it. It’s not that hard.”     —Bruce Snider