Taking stock of the horses of Matinicus 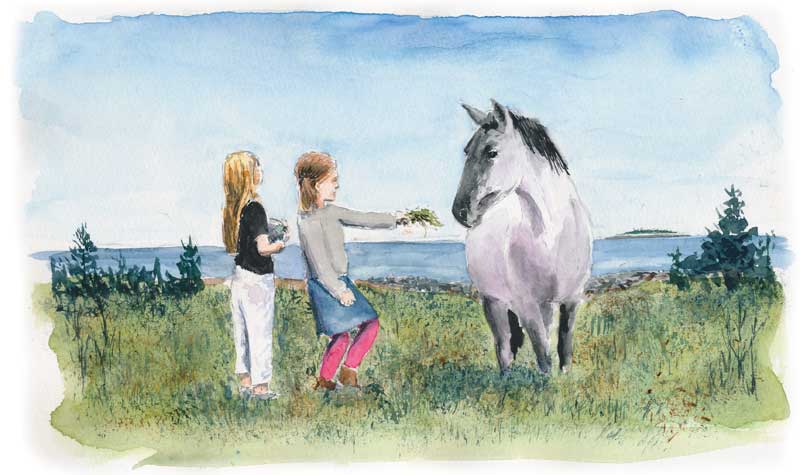 Sugar the pony lived in the field across the road. When I first moved to Matinicus in 1987 to teach school, I lived in the parsonage, as did most of of the teachers, each in turn, there being no parsons in the parsonage after Labor Day. Sugar was clearly old. It was unclear to me whether she belonged to anybody, or was her own mistress in retirement, erstwhile owners having gone away to high school or some other pursuit on the mainland, and not returned.

Danny, who has lived on this island all his life, told me that he once rode Sugar into the schoolhouse. This was back when classes were held in the “old school,” meaning the historic one-room schoolhouse—supposedly built with lumber from a shipwreck, complete with boys’ and girls’ entry doors, large windows, no insulation, and two outhouses.

Nobody rode Sugar by the time I got to the island to teach in the newer little school, built beside the older structure in the 1960s. But people would pat her on the nose as they passed by, and my gang of elementary kids paid her some attention. Sugar lived a couple more years, seemingly requiring very little from neighboring humans.

A few years later Max, an island outlaw of some repute, who was back from the seven seas, decided to surprise his lady with two horses. “Hayburners,” she called them. One, coincidentally, was named Max, and the other, Xanadu. Max (the human) had never been one for particular consideration of the opinions of neighbors, and the two horses got loose and went walkabout somewhat frequently. Our daughter was in kindergarten at the time, and the short walk to school required passing the horses’ field, from which they were sometimes AWOL and in the middle of the road, instead. Being only five, she was uneasy passing through the forest of long legs. She wrote a letter to the Board of Assessors (more or less our town council, like a select board) wherein, in a small child’s elementary-school scrawl, she requested that the town fathers make Max keep his horses “in their fence.”

Eventually somebody else took responsibility for Max and Xanadu and got the two flight-risks into a horse trailer, aboard the state ferry, and off the island.

Not long afterward, a family new to Matinicus brought out a horse named Ringo. I never got to meet Ringo up close, because his people were a bit high-stress, but to this day I regret not getting a photograph of Mr. Mitchell, Mr.
Murray, Mr. Tarkleson, and the horse together: John, Paul, George, and Ringo.

That family left after a few years and took Ringo with them.

Then a woman who had been born here came back and married the guy across the road. Soon, she had a horse, which I think was called Buster. Maybe it was Buddy. That horse taught me an important lesson: always wear your helmet. Ahem—even if you aren’t actually riding the horse, you might want a helmet. She and Buster were in my driveway one fine summer day, with a bunch of people standing around talking, and we decided to take some pictures. I hopped up on the horse for a photograph and inadvertently pulled on the reins. That signaled to the horse to back up, which he did.  I tightened up again because I was an idiot.

The horse, properly trained, got messed up by my accidental instructions, stepped backward into a rut, and fell. I remember none of that because of the retrograde amnesia. They tell me my ankle should have hurt like crazy after the twisting it took in the stirrup as I fell and hit my head on a rock. I don’t remember that, either.

I do remember my neighbors helping me to walk, steering me back into my house and to the couch, where I rested for the remainder of the day. The following day I was supposed to work as a substitute sternman for the lobsterman next door. But that didn’t happen.

Another few years without any horses passed, until one named Diva arrived on the ferry to spend the summer a couple of years ago, Her owner, a young woman experienced with horses and by all accounts up to the task, would ride Diva now and then. Now, “Diva” is pronounced “Deeva,” which sounds like “Eva” from a distance. It made Diva’s owner and I both jump when someone asked her a question which sounded like, “What were you and Eva doing messing around in the mud?” She had been spotted riding Diva on the beach, and evidently the horse liked the mud.

Diva spends winters on the mainland, but last summer she returned, this time with friends. In 2018 there were four horses on Matinicus—Diva, Juno, and two whose names I do not know except that they were not really, actually named the Four Horses of the Apocalypse.

As I write, it is winter, and Matinicus has no horses. There are a few cows and some poultry, and bees hunkered down in their hives, and one fisherman is rumored to have plans for sheep in his retirement. For a fishing community this place has one heck of a 4-H club. And by the time you read this, there may be a horse or two around here, again.

Eva Murray lives year-round on Matinicus Island. She has written three books detailing aspects of island life, including Island Schoolhouse: One Room for All (Tilbury House), and is working on about 10 more.