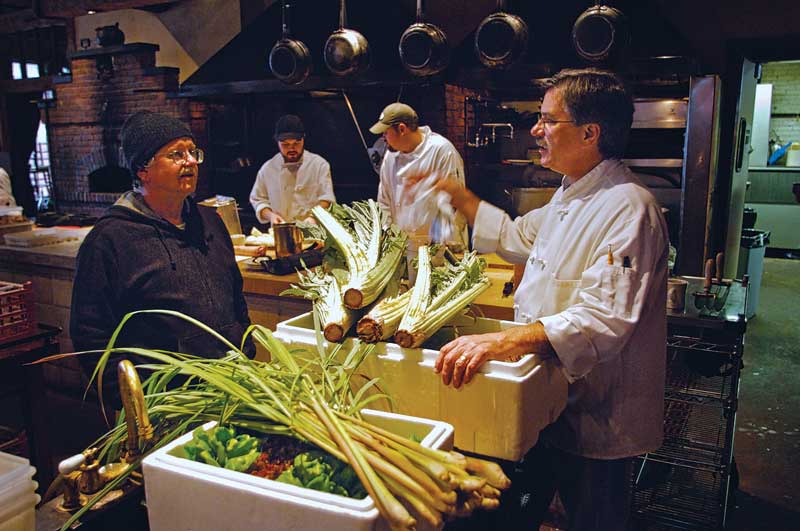 Chef Sam Hayward (right) says he will take any vegetable raised by farmer Frank Gross of Lisbon Falls, whom he refers to as “Oz.” Gross is shown here with produce that includes a box of cardoons, a member of the thistle family.

When you think about food in Maine over the last 30 years or so, three names invariably come up—a farmer, a gardener, and a chef, all of whom have had a profound influence in this food-blessed state, on what we grow, how we eat it, and how we think about it. These three, Eliot Coleman, Sam Hayward, and Russell Libby, have changed the way we eat in the Dirigo state, and changed it very much for the better.

Libby, the farmer, was the inspired and inspirational leader of the Maine Organic Farmers and Gardeners Association for 17 years, until his untimely death in 2012. Nationally, he was known as an advocate for locally grown food and a powerful voice for small family farmers. “Spend just $10 a week on locally sourced food,” Russell would say, “and the result will be a stronger, more vital local economy.”

Coleman, the gardener, continually proves, in his genial but stubborn way, that even in a cold, northern, short-season climate we can grow and store tasty, high-quality and nourishing fresh vegetables year round, and that technology, put to the right uses, can be a worthy partner to something as down-home as growing your own food. It can be profitable, too—witness the many Maine market gardeners who follow his advice and example.

But neither of these notables would have had such a profound effect on food in Maine had it not been for the James Beard Award-winning chef, Sam Hayward, co-owner of Portland’s much lauded Fore Street Restaurant, and now semi-retired from a long and distinguished career. Hayward has worked closely with farmers, food producers, and fishermen since the early days in his first restaurant, 22 Lincoln in Brunswick, moving on to The Harraseeket Inn in Freeport, and finally to Fore Street.

At all these places, Hayward made a point of showcasing the finest kind of Maine food, from Bang’s Island mussels and Lee Straw’s semi-feral Maine island lamb to Dave Berry’s Bowdoinham
rabbits and the amazing produce from Frank Gross’s Lisbon Falls garden, including roots, leaves, herbs, and leeks that were “blanched,” Hayward said, “two feet high.”

“Frank is still supplying me even today,” Hayward added. “I’ll take anything that comes out of his ground.”

That kind of quiet enthusiasm is typical of Hayward, who is noted for his modesty. Ask him if he played a role in Maine’s food revolution and he is apt to cite at least half a dozen other restaurateurs, chefs, and even food writers who, in his view, were more responsible for how Maine went from a white-bread empire of bland food to today’s exciting, sky’s the limit scene. New restaurants seem to open almost daily, at least in the southern tier of the state, and consumers seem willing to try new flavors, textures and, yes, even new vegetables that go way beyond green beans, peas, and carrots.

I happened to be in Fore Street one day several years ago when a young farmer from York County came in with a handful of fava beans (broad beans), hoping to interest Hayward. Another chef might have brushed him aside with his box of overly mature, tough beans, but not Hayward. Instead, he sat down at a booth, picked up one bean pod after another, showed the farmer exactly where he’d made a mistake, and then said encouragingly, “If you can come back next season with fava beans the way I want, the way we can use them, we’ll have a deal.”

More than anyone else, Hayward, by paying such close attention to the source of his ingredients, taught the rest of us—farmers, fishers, and consumers alike—to think about where our food comes from, how it’s grown, how to prepare it, and how a restaurant that trades above all on that kind of honesty can be a whopping success. Look at one of his signature dishes, for instance: Bang’s Island mussels, roasted in Fore Street’s wood-fired oven in an almond-garlic-butter-wine mixture that calls to mind similar Spanish renditions, the warm, nutty sauce playing off the briny astringency of the seafood. It has been on the menu at Fore Street since the restaurant opened more than 20 years ago—Hayward says the recipe came from a former chef de cuisine, Alan McGrath.

Maine-sourced seafood has always played a major role in Hayward’s kitchen and on his table. It’s an element that goes back to his earliest days as a professional cook. Out of the blue he was offered a summer job in the mid 1970s on Appledore Island, in the Isles of Shoals. Without much experience, he was hired to cook for the staff, students, and building crew who were creating the then new Shoals Marine Laboratory. In such a remote place, located 10 miles off Portsmouth, he learned he could rely to a certain extent on what was brought in by fishing boats that stopped by sporadically on their way to shore-side markets.

“These little boats were bringing in 40 to 60 pound codfish and we’d have the students filleting them as part of their studies. It was constant experimentation, constant exposure to the chain of life in the Gulf of Maine,” Hayward said.

He did that for three seasons and came away “thinking about the environment in a way that infected me and has never gone away.” During his last year at Shoals, he said, out on the horizon at night he could see the lights of big foreign factory fishing ships, Russian, Polish, East German. “They were vacuuming up the Gulf of Maine,” he said. It was his first awareness of the threat that over-fishing presented to fish stocks in the Northwest Atlantic.

When he opened his own place at 22 Lincoln in Brunswick several years later, Hayward carried that sensibility with him—not just in relation to the fragility of seafood but in general about the environment, the food supply, and the chain of being that connects it all.

Here in Maine, where terms like “fresh,” “local,” and “sustainable” have real meaning, instead of paying lip service to current fads, Hayward has been one of the foremost leaders in quietly pointing out those connections. It’s true, he had a receptive audience as consumers all over the country were beginning to question where their food came from and what was in it. And there was a growing network of providers in Maine, where Libby at MOFGA and Coleman over on Cape Rosier were leading the way. It took Sam Hayward, however, in his earnest, quiet, deeply questioning way, to bring the movement together, to give it coherence and meaning in a Maine context.

Nancy Harmon Jenkins is the author of many books and contributes to many publications, including The Wall Street Journal, the Washington Post and Saveur. Her most recent book, The Four Seasons of Pasta (Avery Books), was written with her daughter Sara Jenkins, chef-owner of Nīna June Restaurant in Rockport. 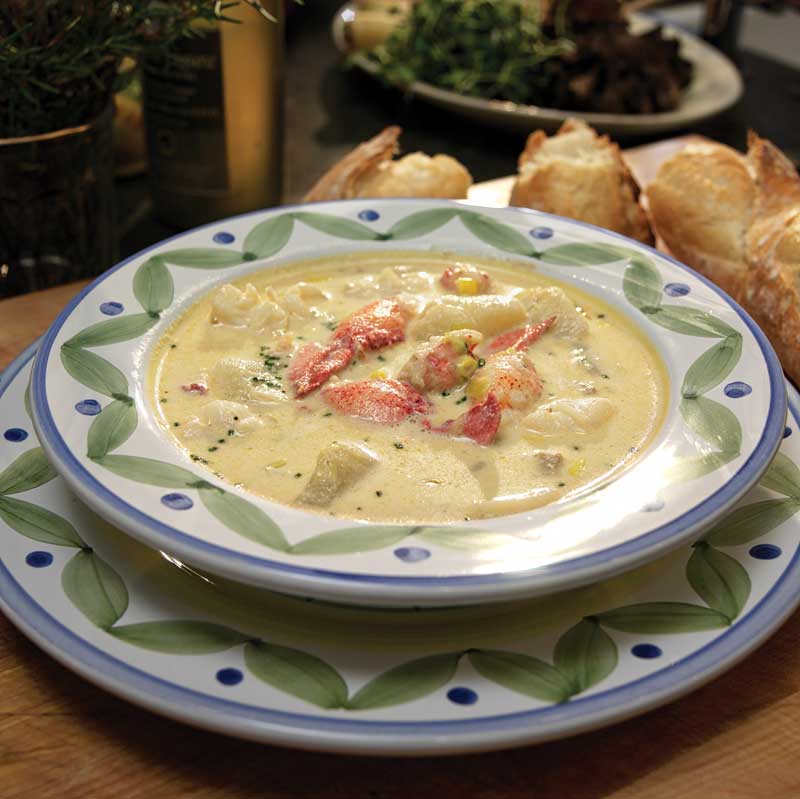 The secret to Hayward’s chowder is to use baking potatoes as a thickener. Ingredients:

In a heavy stock pot or soup kettle, gently stew the bacon in a teaspoon of butter until it yields its fat and starts to turn crisp on the edges. Add the potatoes and leeks and a finger of water, just enough to keep the potatoes from catching, cover the pan and cook gently until the vegetables are soft, 20 to 30 minutes.

When the lobsters are cool enough to handle, set a sieve over a large bowl and break the critters open in the sieve, draining out their body liquids into the bowl. Break the claws and tails away from the bodies, and set them aside. Pull apart the body sections (carapaces) and remove any red coral or greenish tomalley. Push the coral and tomalley through the sieve, using a wooden spoon, and combine it with the liquid in the bowl. Add all this liquid to the potatoes and leeks and continue to simmer gently.

Now extract the translucent, gelatinous lobster meat from the claws and tails. Cut it in bite-sized chunks and set it in a skillet, along with the remaining butter, over medium-low heat. Cook, stirring, until the lobster meat firms up in texture and becomes opaque in color. Then scrape the meat and buttery juices into the chowder pot. Continue simmering gently.

Combine the milk and cream in a small saucepan and set over medium heat. Bring to a simmer for 2 to 3 minutes to get rid of the rawness, then add to the chowder. Once the chowder comes to a simmer again, turn off the heat, cover the pan, and leave it for 20 minutes.

When ready to serve, bring the chowder to a simmer once more, stir in the corn and simmer 5 minutes, or until the corn is just done. Adjust the seasoning and serve immediately.

If you wish, float a little more butter (a little more richness) on the surface of each bowl as you serve up the chowder.