Innovative tram cuts down on the climb

On a bright December day in 2002, as Bill and Valerie Sowles stood with their realtor on a cliff above the New Meadows River, they were enthralled. The view was spectacular. The water below was a translucent blue. The fragrance of the ocean and the surrounding spruce and balsam fir forest was intoxicating. Less than a quarter mile across the water a solitary lobsterboat churned past the shuttered summer cottages on Birch Point. The sound of its motor was the only thing disturbing the quiet. Here on Long Island, at the eastern edge of Casco Bay, there were no roads, no cars, and no utilities. It was a perfect spot for the summer cottage that Bill and Valerie had longed to build, and they did not hesitate to complete the purchase. 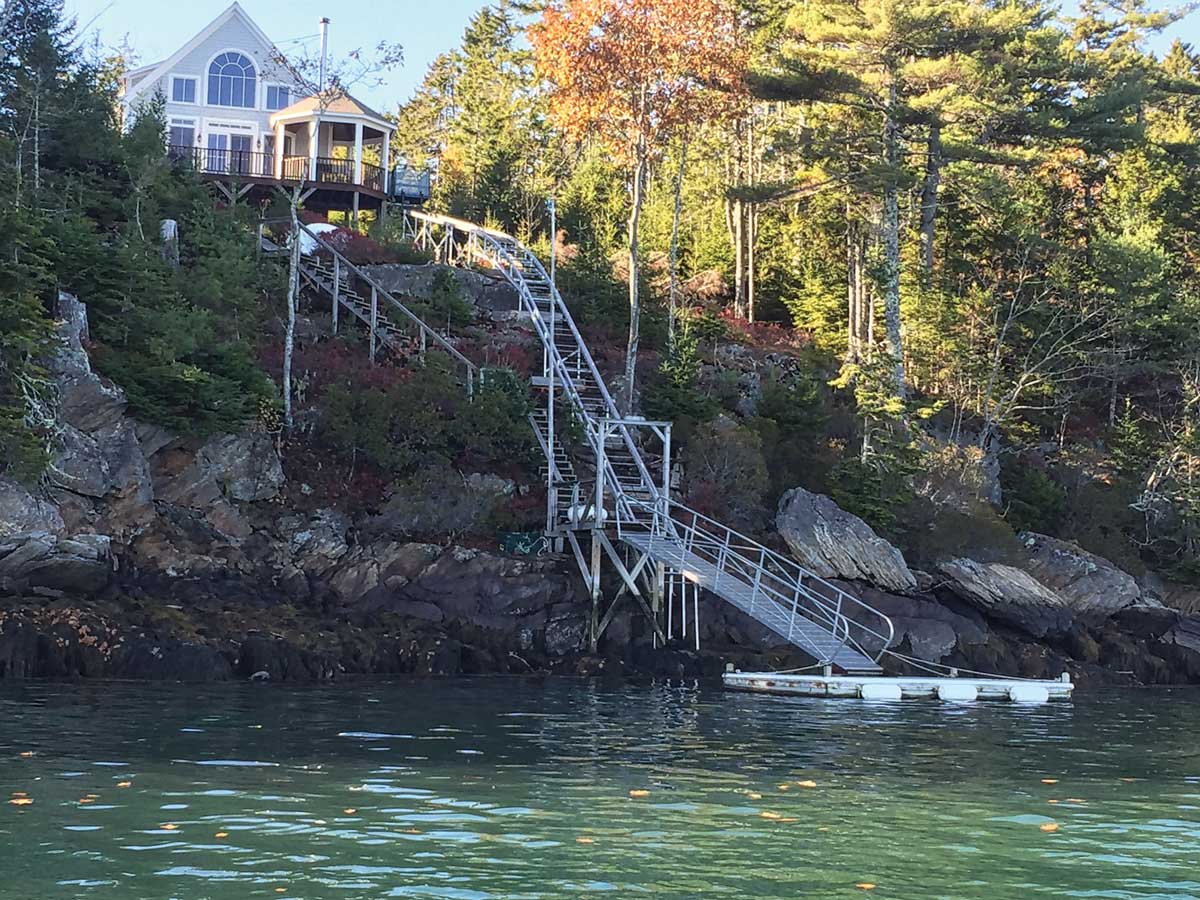 The funicular (tramway) to the right of the stairs, will allow Bill and Valerie Sowles to enjoy the view from their island cottage well into their senior years.

The next summer, they hired Ben Wallace of Cundys Harbor to install a pier, a deep-water dock, and a set of stairs to the top of the cliff where they planned to build their cottage. The stairs were impressive, coursing their way up the cliff face from landing to landing, 10 to 20 feet at a stretch, 52 steps in all. That first summer the couple didn’t spend much time on the island, but occasionally they would tie up to the mooring out front and gaze at it from the water, imagining the house to come. It wasn’t until the following year when they started construction that they became fully aware of just how steep and long the climb up was. At low tide, the vertical rise from the water was nearly 60 feet. To get the lumber and materials to the building site, the contractor brought a crew of 15 men and set up a human chain. Bill joined them in moving studs, joists, rafters, and tools hand-over-hand up the stairs.

It took a year to complete the house. Every window, door, shingle, and nail came to the island by boat, and then up those stairs, as did every stick of furniture. After they moved in, the Sowleses quickly learned to economize on their trips up and down the cliff face. “I made a rule that we never made an empty trip either way,” said Bill. “I once caught my daughter trying to take a roll of toilet paper home with her. She said she needed it for her apartment. I told her I would buy her a whole case of it at Hannaford but she was not to take needed items off the island!”

After several seasons of carrying groceries, propane tanks, furnishings, and luggage up and down those stairs, Bill and Valerie decided that if they were going to continue to enjoy the cottage past their vigorous middle years they would need an easier way to get to it. They needed a tram. Bill found the “Hill Hiker” on the Internet and was sold on the product after speaking with the owner, Bill MacLachlan, whose factory is in Minnesota. The system Bill designed is known as a “funicular”—a cable car on tracks that utilizes gravity on the way down and a heavy-duty electric motor on the way back up.

Bill and Valerie knew they needed local help with the project: someone with a boat to transport workers and materials and do site-preparation work before the installers arrived from Minnesota. Through a friend, Bill was referred to Cyrus Cleary from Sheep Island, one mile to the south. “Without Cyrus this project probably would not have happened,” Bill said. “He was instrumental in all the site preparation, including pouring the concrete foundations, and was on hand to solve the numerous tactical problems that cropped up throughout the installation process.” 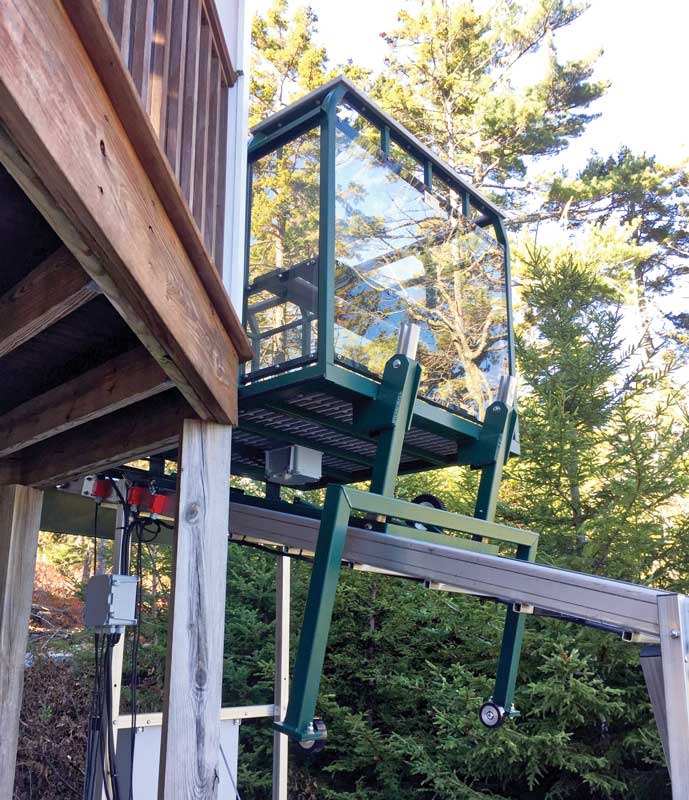 The cable car, shown here at the top of the tracks, comfortably seats four adults. Cyrus has built, installed, and now maintains dozens of commercial and residential piers, floats, and ramps in the region; he also restores all sorts of boats, large and small. Three years ago, when he was in the market for a special trailer to use for launching and hauling a growing fleet of customer boats, he decided to build one himself. The result is a unique trailer outfitted with electronics, a sophisticated compressed air system, air-cushion springs, adjustable axles, and hydraulic arms capable of carrying a 15-ton cabin cruiser—or the classic 52' wooden racing sloop with 9' draft that Cyrus is restoring and plans to sail singlehanded.

In October 2016, as the midwestern crew assembled and put the final touches on the Hill Hiker, Cyrus took me out to Long Island for a look. His workboat is an aging 24' Carolina Skiff with a big 90-hp Mercury outboard, outfitted with the kind of tiller control you would expect to see on a small motor on a light aluminum skiff. By foregoing the usual helm and set of remote controls, Cyrus keeps the entire boat open for building materials and tools, but the real reason, he confided, was that a tiller control makes the boat a lot easier to maneuver in tight places. It takes a sturdy and brave-hearted soul to manage such a huge motor by hand. In more than 60 years on the water I have never seen anything like it. Neither had I seen or imagined what Cyrus was about to show me. 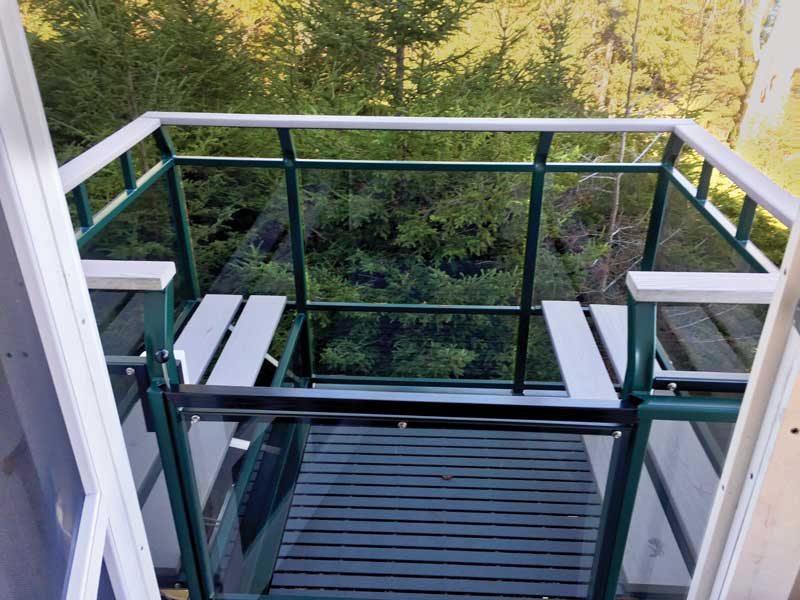 Push button controls located in the car and at top and bottom of the tracks automatically start a generator that drives the system. As we approached Long Island I was astonished by both the winding set of wooden stairs and the tramway’s gleaming aluminum rails, stretching in a broad parabolic curve from the water’s edge to the top of the cliff. At the top, next to the cottage’s front porch, stood an open “car” large enough to carry four or five adults. I wondered how the car would stay level when the tracks changed their angle of descent halfway down the cliff. My question was answered when Hill Hiker’s production manager demonstrated the ingenious system. The car’s chassis has two sets of tracking wheels at the front end, the first on a short pair of “legs” for the gentle incline at the top, and the second on a longer pair that engage a secondary rail halfway down the cliff where the track bends to a steeper incline.

With any elevator system safety must be a primary concern, and this tram is no exception. Drawing on years of experience in the elevator business before he started the company in 1997, Bill MacLachlan and his father-in-law, a mechanical engineer by training, devised multiple safety mechanisms that deploy automatically in any emergency. A braking system engages if tension on the cable is released (in the event that the cable were to break, for example), and a wheel-mounted governor ensures that if the car starts moving too quickly it will automatically engage an emergency brake.

Since there are no utilities on Long Island, the Sowleses installed a portable generator and a small bank of batteries under the cottage to power the tram’s 5-hp electric motor. Push-button controls at the top and bottom of the railway automatically fire up the generator when it is needed, and a sophisticated set of electronics enclosed in a weatherproof utility box controls the motion of the car so that its operation is smooth and gentle. Some of Hill Hiker’s other systems are powered by solar panels, but there is a trade-off between the compactness of a gas-powered generator and the space and exposure requirements for a solar array and storage batteries.

This summer will be the first season for the Sowles family to enjoy their new means of access. Bill said he is prepared for the possibility of a breakdown; the first time he tested the system the power kicked off when he was halfway down.

“We got stuck on the steepest part of the slope and I had to climb out and walk up the stairs to restart the generator,” he said.

“We have to expect that there could be a few kinks to work out; but Cyrus is nearby if anything serious goes wrong. The important thing is that the tramway is making it possible for us to enjoy our island summer retreat right into our old age.”

Peter Macdonald Blachly (also known as Peter Alexander) is a musician and writer living in Bath (www.peteralexander.us). His recently published memoir, The Stone from Halfway Rock, is available in bookstores throughout Maine. Cyrus Cleary is his cousin and next-door neighbor on Sheep Island.