Construction on an island poses difficulties even under the best conditions. Transporting materials and a crew out from the mainland requires time-consuming and expensive logistical contortions. That whole equation is ratcheted up a notch when the island is 23 miles offshore, and doesn’t have easy access for heavy equipment. 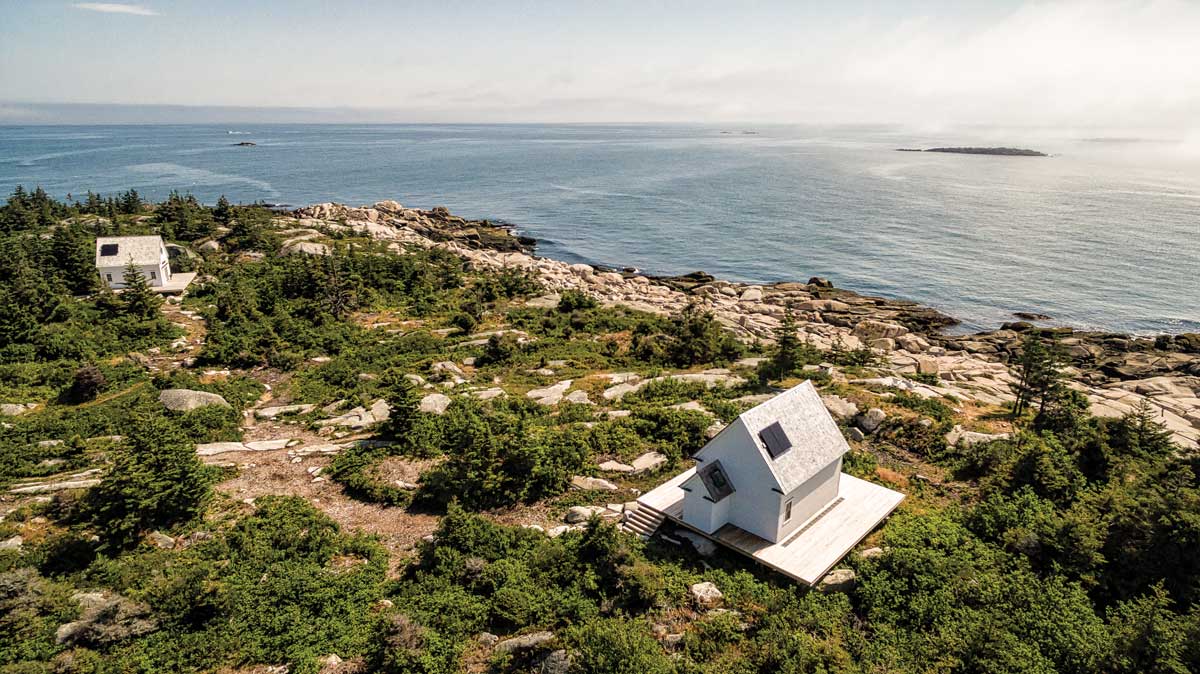 Getting the building materials from the beach to the building sites while not damaging the island’s fragile landscape was challenging, as this aerial view demonstrates. Both studios, which are classic and simple, have ocean views. The platforms on which they were built extend beyond the walls to become spacious decks.

This was the situation on tiny Wheaton Island perched just off Matinicus, when the prominent artist couple who live there asked builder John Libby of Houses and Barns by John Libby to build them his-and-her studios. Libby knew the terrain well since he and his wife have owned a home on Matinicus since 1998. He’s been building homes and barns on Matinicus Island, and elsewhere throughout the state, since starting his company in 1971. His island projects in Penobscot Bay include a large barn for Turner Farm on North Haven. 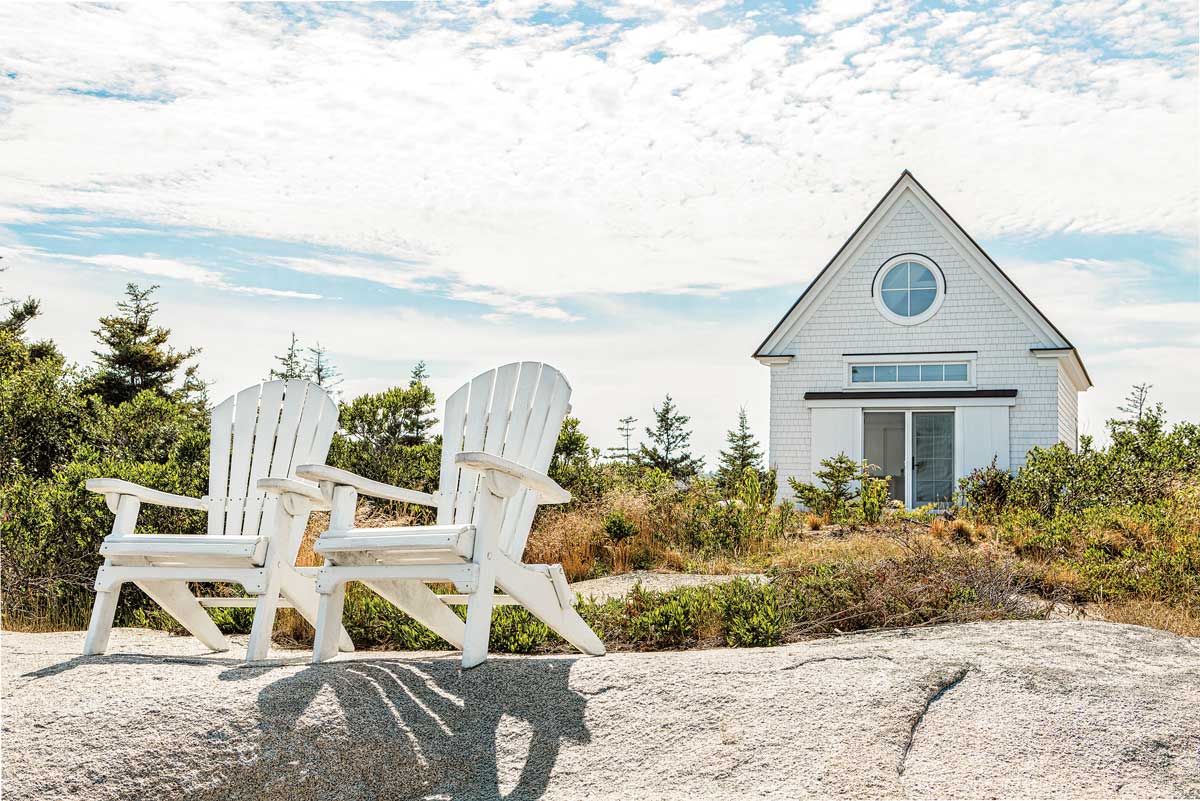 Raised in Presque Isle, Libby learned construction from his builder father and learned how to build new barns by taking apart and restoring old ones.

“I have a degree from the school of hard knocks,” he said.

Painter Bo Bartlett and his wife Betsy Eby had been dreaming about new studios for several years. They knew Libby’s work and knew they wanted one of his signature post-and-beam models—simple, graceful, and elegant. Island building is well suited to post-and-beam construction because the sections can be built in advance and put together on site. It made particular sense on Wheaton, which is 20 acres of granite ledge dotted with evergreens, Rosa rugosa, and juniper: no roads, no ferry landing, and limited access to power. 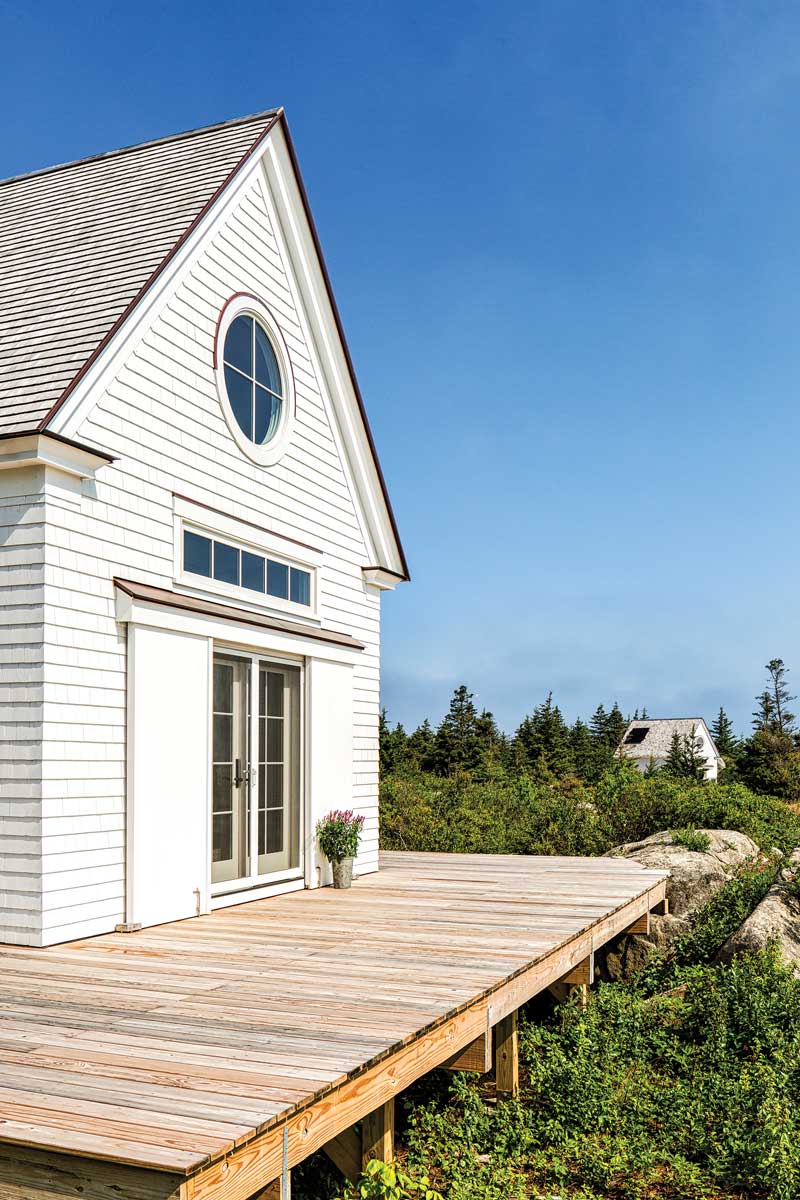 Bartlett, who lives in Georgia in the winter months, began spending summers on Matinicus back in 1995. He had been visiting Betsy Wyeth on Allen Island off Port Clyde. “When I asked her about a tiny dot on the horizon to the east, she told me ‘that’s Matinicus. Don’t ever go there.’ So the next day, I got a lobsterman to take me out, and sure enough I fell in love with it.”

First he rented, then he looked for a place to buy. Ironically, he lost out on his first choice, a waterfront lot with a ranch-style home on the west side of Matinicus, to John Libby. Then in 1999, Bartlett bought Wheaton Island. Perched just off Matinicus’s tiny harbor, Wheaton is separated from the larger island by a rock-strewn gut.

There were a couple of derelict structures on the island dating back to 1905 that needed to be rebuilt. Bartlett knew who to ask: John Libby, the man who’d outmaneuvered him on his previous house choice. Libby helped restore the existing buildings and built a couple of new small outbuildings, one to house a generator and another a gem-like post-and-beam outhouse. Bartlett was thrilled with the work, which was done on time and on budget, he said.

So a decade or so later, when Bartlett and Eby decided the time had come for new studios, there was no question about who would do the work. 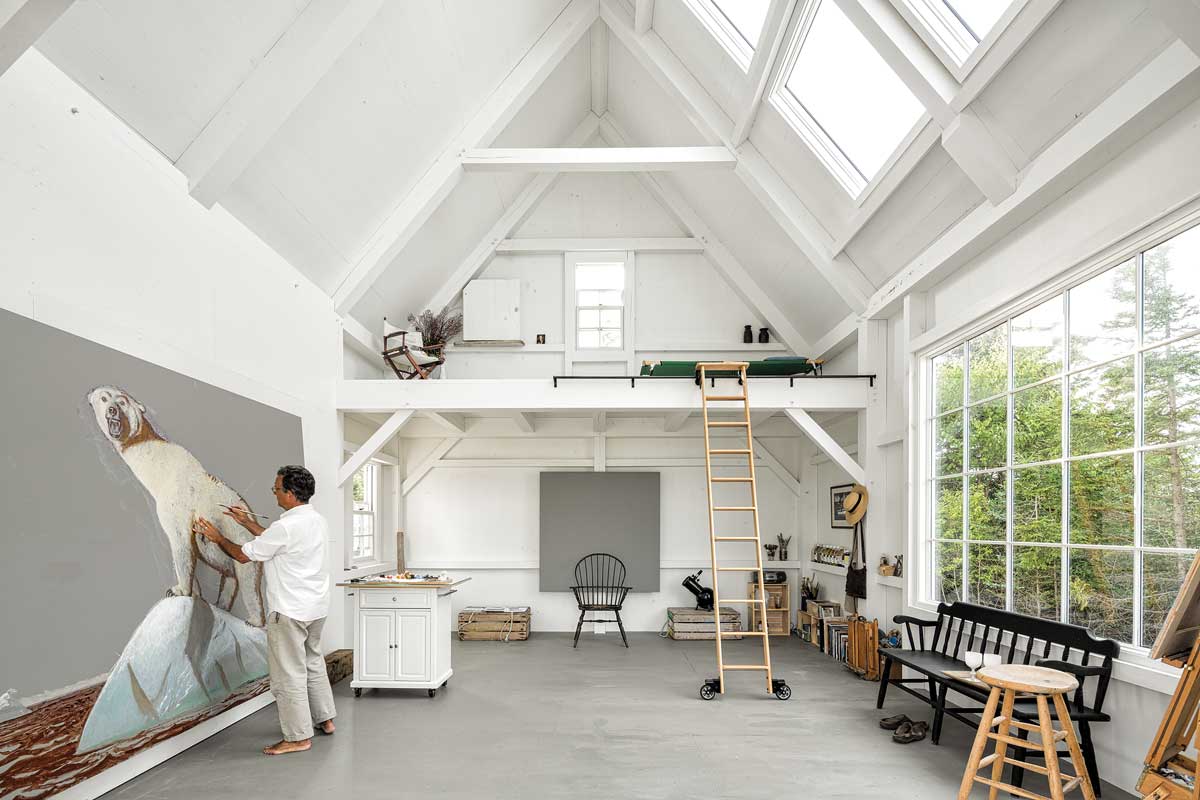 Artist Bo Bartlett, shown here at work on a painting, often incorporates the ocean and mythic figures into his huge canvases. His studio includes a small loft and a big north-facing window.

“He had built out there, so I knew he knew how to do it,” Bartlett explained. “We felt like the quality of the work would be worth the investment.”

He had been thinking about where to put a studio for years. “I’d always had a site in mind,” he said. “I had watched the sun and moon, and the way the weather came through, and had found my site pretty close to the middle of the island.” Eby was less sure of her location. 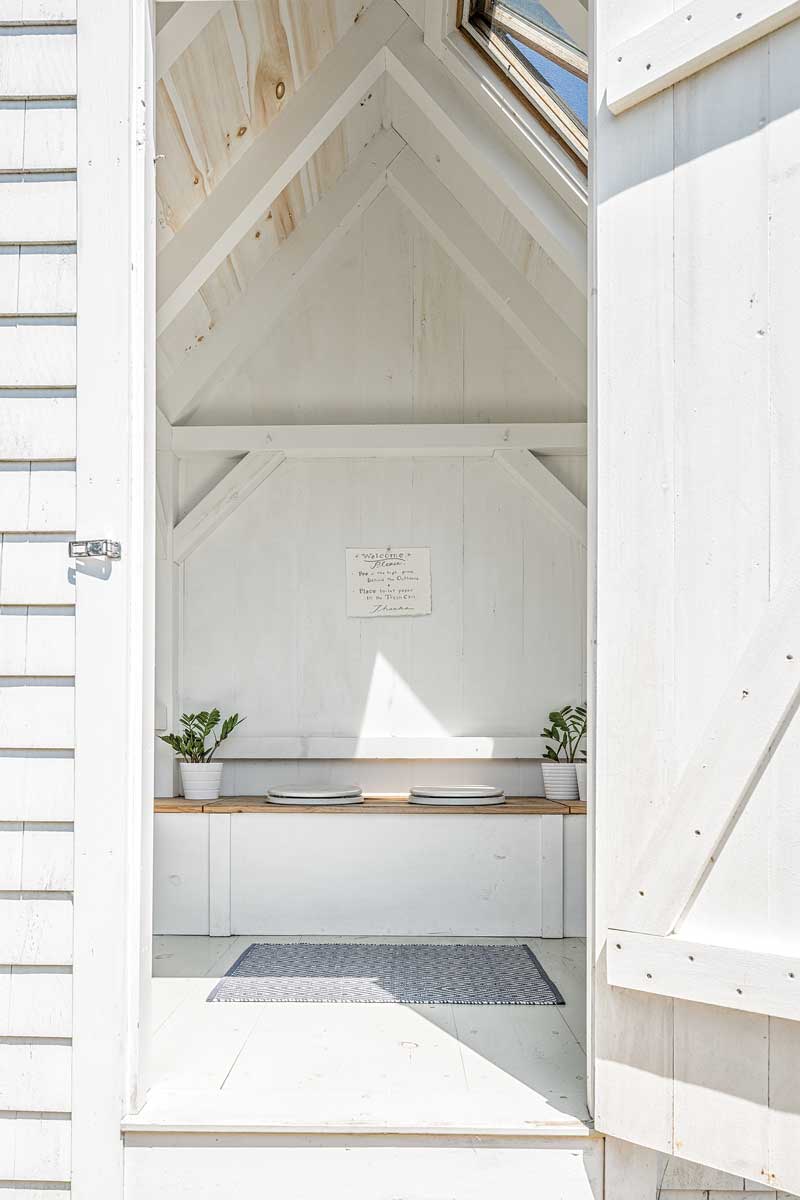 Even the outhouse on Wheaton is an elegant post-and-beam building. Initially, the two hoped to have the barnlike structures close enough that they could eventually be connected into a larger house. But they could not find a big enough spot among the rocks. Libby and his crew helped the process by marking out six potential building sites with colored strapping. Bartlett and Eby walked from one spot to the next to assess the view and the light—northern light is important to both artists. That was the easy part. The actual construction was the bigger challenge, particularly getting building materials out from the mainland and onto Wheaton.

The heaviest materials, cement for footings and pressure-treated wood for decks, came out on the Island Transporter’s Reliance, a large workboat with a landing ramp. The barge nudged ashore at a beach in the narrow inlet between Wheaton and Matinicus and the materials were unloaded by skid steer. Libby’s crew built a temporary road to each studio site using wood and carefully set boulders. The rest of the materials, white-pine siding and beams, and windows came out on an Island Transporter barge that moored in the harbor. A helicopter from Whitefield-based Maine Helicopters spent a day flying between the barge and the island with carefully measured loads of materials—those for Bartlett’s studio were marked with blue ribbons, Eby’s in pink.

“John had the foresight to take care of every variable,” said Bartlett. “There were no surprises, which is huge on a project like this.” 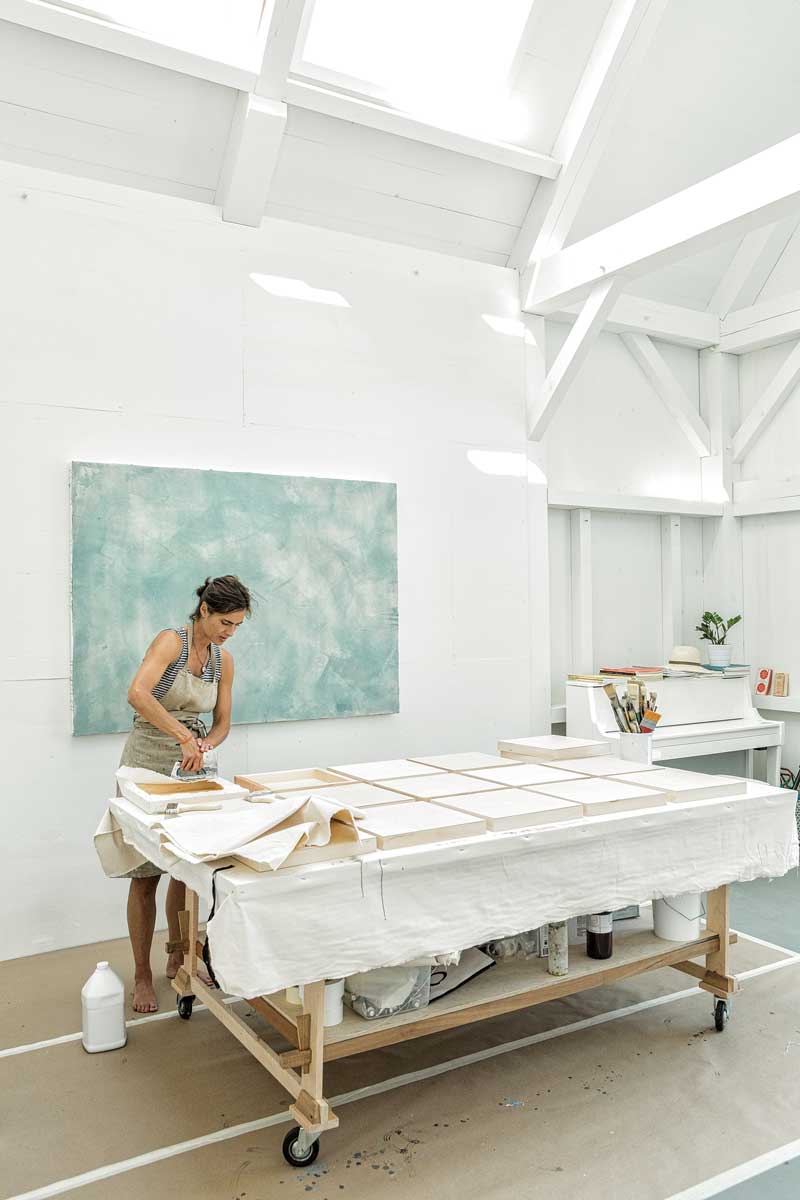 Betsy Eby prepares canvases in her studio. On the wall behind hangs one of her encaustic abstract works in progress. The site work took two-and-a-half weeks, and the construction another four-and-a-half. Libby saved transportation time and costs by housing the work crew at his Matinicus home and a seasonal rental that he had built next door.

In addition to custom construction projects, Libby has a line of signature models. The two studios were adapted from his Harraseeket model. Measuring 18' by 24', they were painted white inside and out—all this was done back in Libby’s Freeport workshop. Sections of the buildings also were put together in the workshop so holes for the connecting pegs could be drilled—master timber framer Peter Truslow (he’s been with the company for 30 years) worked with the rest of the crew to raise the frames on site. The buildings are held together with joinery and pegs.

The two buildings, connected by a meandering woodchip walkway, are almost identical. They feature north-facing skylights, and double barn doors that face the water and are topped by a row of transom lights and a big round window above. Bartlett’s has a small loft accessed by a sliding ladder, and a large north-facing window, while Eby’s has a small shed in back. Trained as a classical pianist, she also has a white upright piano in her space. Both studios feature gray-painted plywood floors and sit atop decks of pressure-treated wood that extend several feet off the ground on footings in some spots and are scribed to the ledge in others. The decking extends out 7 feet on the sides of each building and 12 feet in front, providing room for chairs. Solar panels on each roof provide electricity. 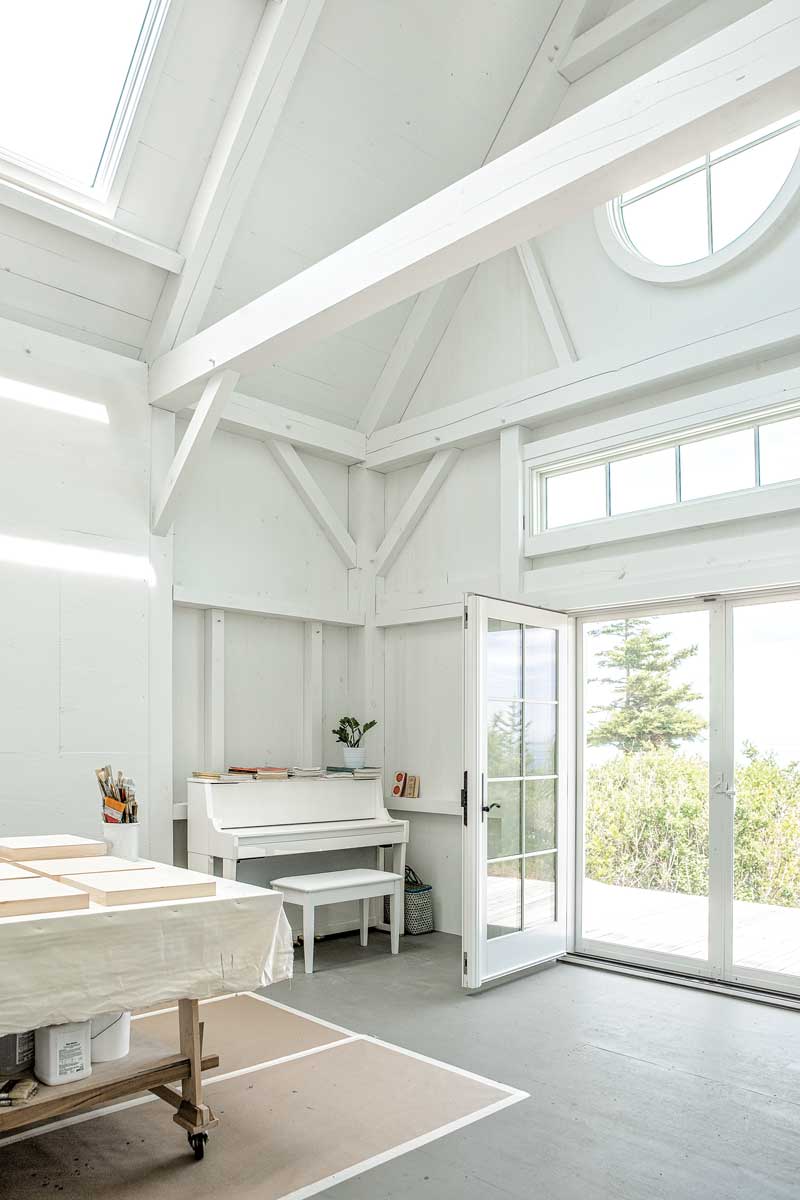 Eby is a classically trained pianist and her studio includes a white piano.

The un-insulated interiors are totally open to the roofline and unfettered by interior walls. The effect, especially with the stark paint, is spacious and clean—white canvas waiting to inspire.

While they both face east toward the ocean, Bartlett’s studio hunkers down in a sheltered hollow next to a high rock ledge; Eby’s sits on a small rise and has a dramatic view of the water—next stop Portugal. With their white-shingled sides and natural shingle roofs, both buildings blend in with the island’s weathered granite rocks.

The two artists, who spend much of the summer living and working on the island, are thrilled with their new spaces.

“It’s beyond our wildest expectations,” said Bartlett. “She gets in her studio and I get in my studio and we paint all day long. We meet at lunch, and go back to our studios, and then go back to work. It’s heavenly for us.”

Bo Bartlett’s work will be featured at Dowling-Walsh Gallery in Rockland, Maine, this August.

Betsy Eby will have a show of her work next October at Cadogon Contemporary in London.

The Bo Bartlett Center, a gallery, museum and teaching center, affiliated with the College of the Arts at Columbus State University, is scheduled to open in January 2018.

Houses and Barns by John Libby