This small lakeside building has a big feel 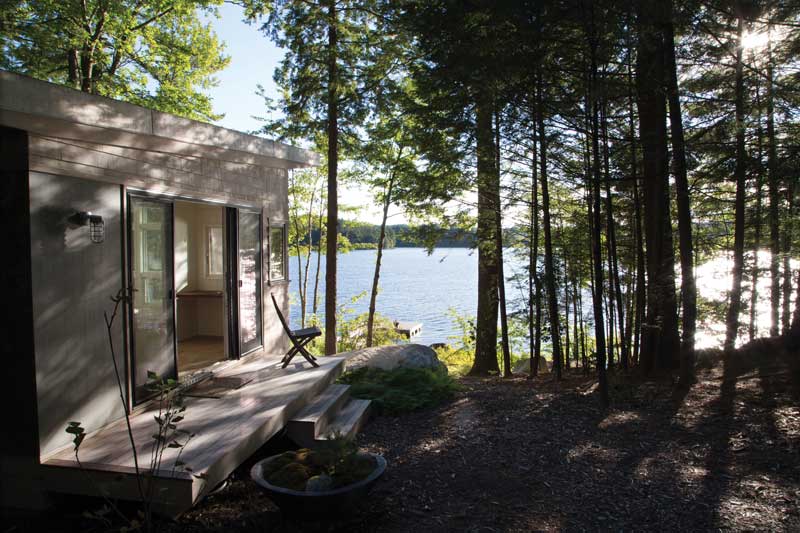 Architect Bruce Norelius teamed up with Cold Mountain Builders in Befast to build a lakeside retreat on a budget. The result is a custom-designed little house with a big view. 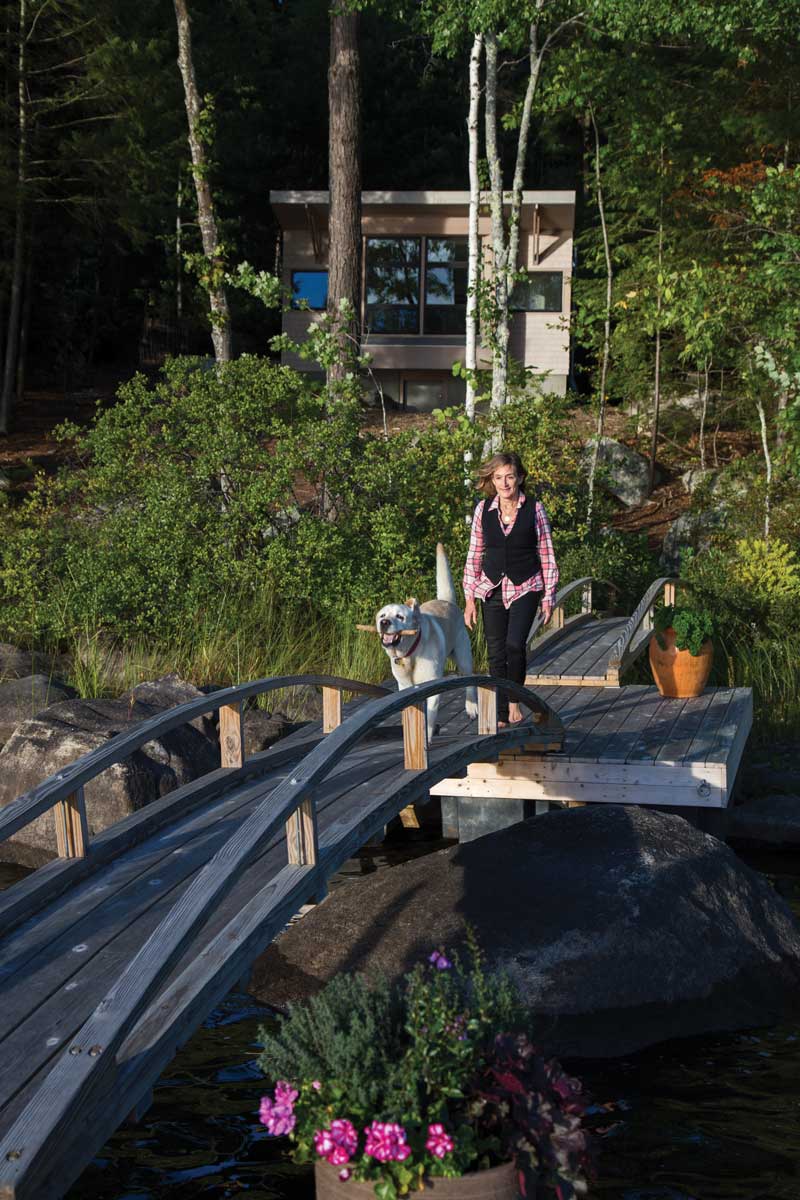 Owner Lucinda Ziesing wanted a cozy writing retreat by the lake that required little maintenance and was spacious enough to host gatherings of friends. Lucinda Ziesing was walking down a camp road just outside of Camden, Maine, when she spotted a “For Sale” sign with a faded phone number nailed to a rundown cabin beneath tall hemlock trees. For two years, she had been dreaming of a place near Megunticook Lake that offered solitude for writing and art; a simple retreat that would still be big enough for afternoon gatherings.

A quick look indicated the small cabin was beyond repair, and it didn’t take long to find out that strict building regulations for the shoreland zone meant a replacement couldn’t be much larger.

Still, Ziesing was hooked. She bought the cabin and small lot and started looking around for an architect who could interpret her dream. The perfect house would have to be smaller than an average hotel room and be built for less than the cost of a pre-fab.

A few months later, as architect Bruce Norelius sat with Ziesing drinking tea on her new dock, he envisioned a Scandinavian-influenced modern design. Norelius, who splits his time between Los Angeles and Maine, starts his designs by creating a story based on the specific site and on the proposed purpose for the building. After listening to Ziesing explain what she wanted, and absorbing the feel of light on the water contrasting with the dark evergreens along the shore, Norelius pulled out picture cards of sinks and light fixtures, natural wooden chairs, and skeins of colorful yarn, and asked Ziesing to choose her preferences so he could get a sense of her taste.

His first design followed the premise that a tiny house can have all the things a bigger house has, just on a smaller scale. Norelius started from the outside and worked in, modeling the exterior to be similar in style to existing old-style cabins along the lake. But when she saw it, Ziesing realized she didn’t want a place like a puzzle where you pull up the bed to push out the table, like in an airplane or a boat. She wanted simplicity and a feeling of space. 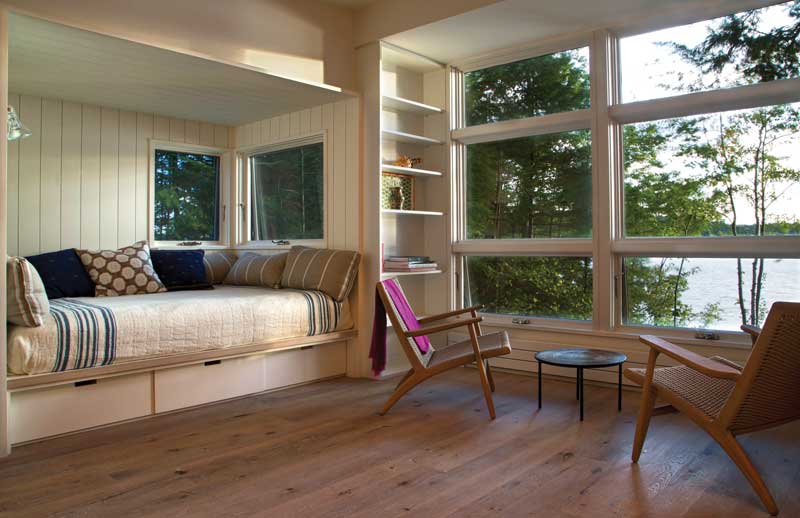 The vaulted ceiling and panoramic windows with views of the lake give the small house a sense of space, while oak floors give it warmth.

Norelius went back to the drawing board with a renewed sense of the challenge to build something smaller than 20' x 20' that felt spacious, encouraged reflection and creativity, and was uniquely suited to the site without busting the budget.

“It was no hardship,” said Norelius. “I love to design.”

The house that resulted is undeniably modern, with deep overhanging eaves and prominent angles, recessed walls, and a cantilevered front box window. On the exterior, neat cedar shingles alternate with dark grey painted walls. Black-framed windows and an outdoor light in unfinished nickel keep it from being standoffish.

The little house is simple, with an informal come-as-you-are feel that clearly took effort to achieve. Even before walking through the door, the fine workmanship of contractor Jay Fischer and his crew at Cold Mountain Builders of Belfast is evident.

“With Jay, I know it will be a jewel. He is an amazing craftsman,” said Norelius. “His buildings are like fine cabinetry that you live in.”

Fischer was the link between Ziesing and Norelius. He had known both for years and working together to build Ziesing’s 376-square-foot lake house was a welcome challenge.

“For years I have been drawn into the complicated world of residential construction that, more often than not, involves working on a grand scale,” said Fischer. “It was deeply satisfying to see this tiny gem emerge over a few months with the crisp thought and detailing we see in larger work.”

Contrast is at the heart of the little lake house. 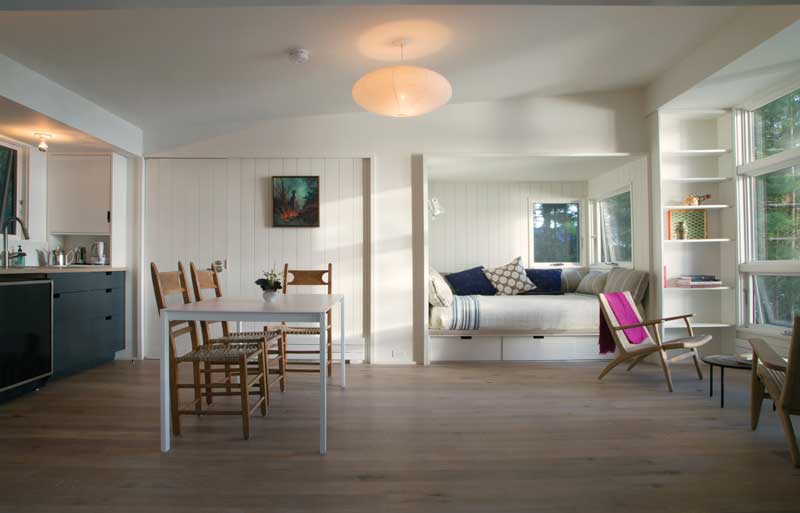 Knotty oak floors washed with a pale tint add warmth. A simple metal table extends to seat 10, while the sleeping alcove doubles as a lounging couch—with deep drawers below.

On entering the house through the double glass doors and taking one step into the main room, it is clear that Norelius achieved his goal of spaciousness by pulling the gaze to the lake and sky. The main room seems to extend out beyond the windows to the view; an illusion Norelius created by designing the ceiling to slant up and forward from the back wall to a high front wall set with the floor-to-ceiling box window facing the lake.

Smaller windows continue the view of the lake in an expansive panorama while still allowing a sense of privacy in alcoves on either side of the main window. One alcove holds a custom-built bed, the other the entryway, closet, and a built-in desk that faces the lake.

Norelius kept to the budget with off-the-shelf windows and pale sheetrocked walls in the main room. Natural wood accents on the edge of the bed and a raw oak floor, knots and all, soften the starkness of the white walls. A pale white wash on the oak floor brings out the grain. 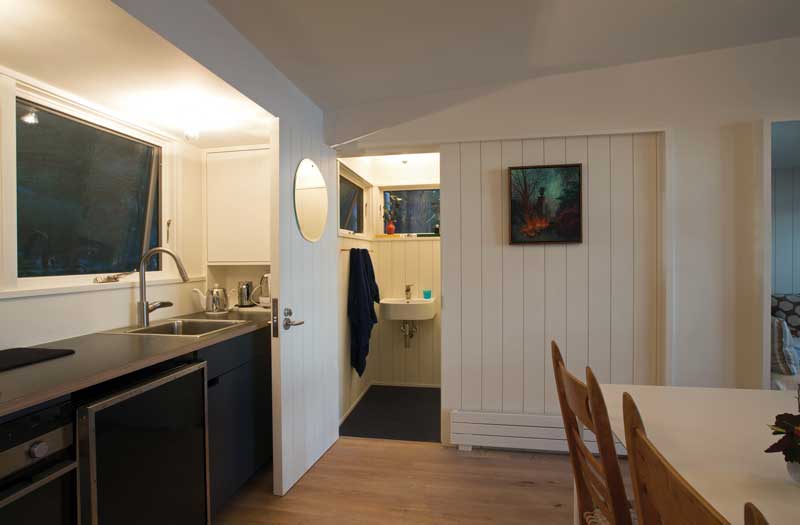 A galley kitchen fits into an alcove at the lower back wall of the house, anchored by gray cabinets. The custom-built bathroom door disappears into the adjoining white wood paneling when closed.

The alcoves are subtly framed. White plank paneling set vertically in the alcove walls adds further contrast to the smooth walls of the main room.

“What we have is one simple open room in the middle, with an entrance area and writing desk on one side and a sleeping area on the other, with each having their own identity so that they feel like rooms within a room,” said Norelius. “I didn’t want it to feel like a sheet rock box.”

In a small custom house being built on a budget, the bathroom could easily be an afterthought. Two windows, a custom-built shower with a glass front wall, and white rectangular subway tiles make even the bathroom feel spacious, although it might be a good idea to dry off inside the shower where there is more room. The slightly Scandinavian-looking sink and toilet are lower-middle-range stock fixtures.

The bathroom door closes flush and disappears neatly into the white paneled wall next to the kitchen. Dark grey custom kitchen cabinets along the rear wall anchor the house to the land and give the room a punch of solidity in contrast to the white walls.

The dock becomes a seasonal addition to the living space, with its expansive view of lake and sky.

Simple silver-bottomed light bulbs serve as kitchen lights, while two wafer-thin wood sconces on either side of the entryway add a warm firelit glow.

Together, Ziesing, Norelius, and Fischer set out to create a room beneath the hemlocks where creativity could flourish. They finished knowing Ziesing’s dream had been realized.

Christine Parrish is a Rockland-based journalist. She converted her shed to a summer cabin and designed her own small house in Maine.