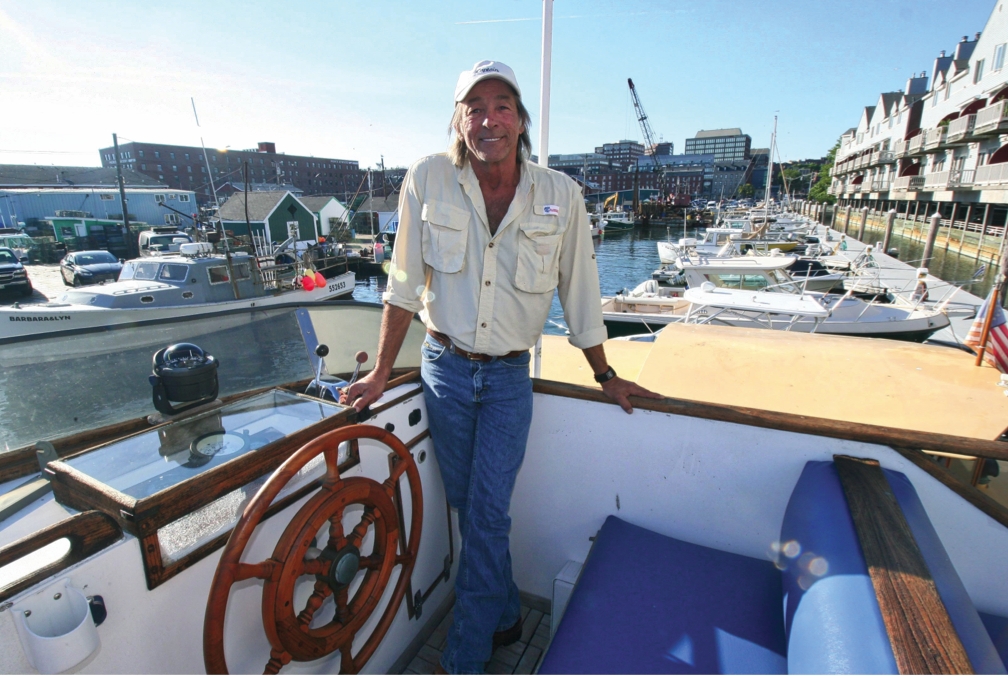 Capt. Ray Card’s Camelot is berthed at DiMillo’s, in Portland, for the winter. The marina is one of the few that allows people to live aboard year-round. Photo by Laurie Schreiber

When Jeff Aumuller sold his business nearly 40 years ago, he moved onto an old wooden cutter in Portland and has been living aboard ever since.

Aumuller, an accomplished blue-water sailor and musician, spends summers at his mooring in the harbor and winters tied up to a dock. Mornings usually find him  down below, composing songs or practicing covers for hours. When it’s cold, he lights his small woodstove, which handily warms the cozy interior. Afternoons, he’ll do routine maintenance on his boat or head to town. Evenings, he’s often got a gig with his band, the Potato Pickers, at one of Portland’s many bars, or sometimes farther afield. 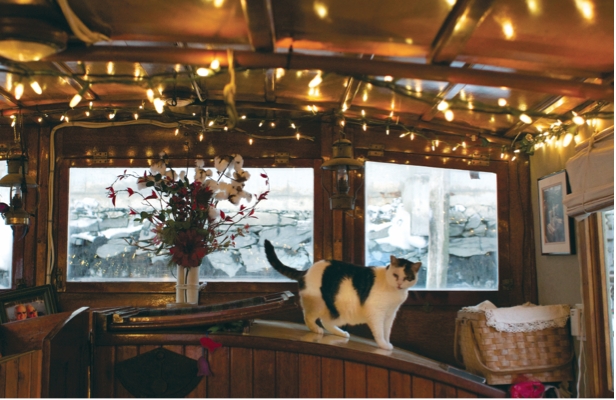 The liveaboard lifestyle allows for many of the comforts of home, including a pet cat. Photo by Emily Qualey Living year-round on a boat isn’t new: Plenty of people cruise the Eastern Seaboard, trading summers in the north for winters in the south. But while spending winter, as well as summer, on the water in Maine remains unusual, growing numbers of people are discovering the advantages and joy of making a boat their year-round residence.

On a Facebook page called “Maine Liveaboards,” one commenter guessed that there might be a hundred liveaboards in Maine. In greater Portland, DiMillo’s Marina and South Port Marine remain open in the winter; there are about two dozen liveaboard compatriots at the former, and perhaps half a dozen at the latter. Other docks might get one or two individuals, such as Aumuller, tying up for the winter. Aumuller berths at The Maine Wharf, near the Portland Science Center. There’s also a small community of liveaboards in Belfast. 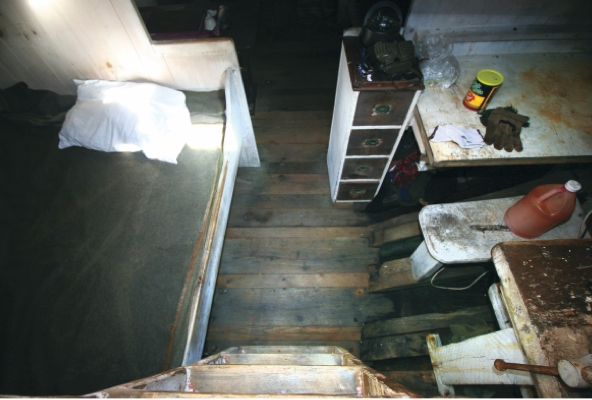 Long-time liveaboard Jeff Aumuller is content with his rustic quarters. Photo by Laurie Schreiber Living aboard a boat doesn’t mean boaters are stuck. They can hop into shoreside vehicles and drive to work, or walk into town to enjoy restaurants and nightlife. The bonus is that they can cast off whenever they want and head to other ports for a visit, start that year-long cruise they’ve been planning, or simply enjoy a night under the stars before heading back to their slip.

Living accommodations vary greatly. Aumuller, now 76, is content with Grebe, his 40-foot Colin Archer-designed Norwegian pilot boat, built in 1933. He is not one for fine finishes or fancy amenities. His Jotul woodstove, two-burner cookstove, and guitar and banjo make him happy. On the other end of the spectrum is Captain Ray Card’s 1977 Marine Trader motoryacht, Camelot. Card is another long-timer, berthed since 1991 at DiMillo’s, where he owns a small fleet of boats, manages and runs more boats for a client, and also plays music, gigging with his band Captain Ray and the Castaways. Camelot is more like a traditional home with modern comforts. The salon and galley have windows all around, getting plenty of daylight, a boon in the cold winter months. There’s room to spread out, set up a TV and computer. He has lamps and knickknacks. 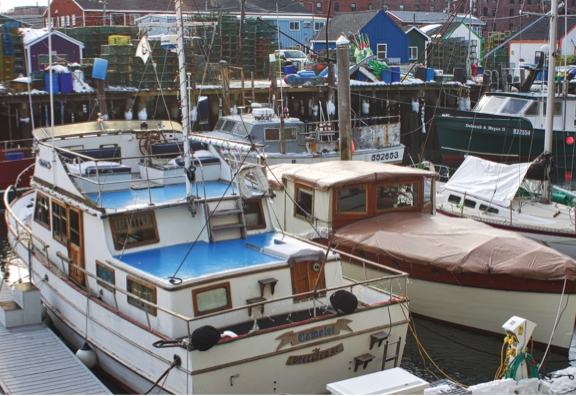 Ray Card lives year-round on his 1977 Marine Trader motoryacht. Photo by Emily Qualey Liveaboards are generally lifelong boaters who choose boats, rather than shoreside houses, as their prime real estate investment for many reasons. They can tie up in one spot for any amount of time, work for a shoreside employer, throw off the lines when they choose, and wake each morning to a million-dollar view.

The No. 1 question they are asked, of course, is how they stay warm in the winter. It’s a matter of preparation. Aumuller orders a couple of cords of oak firewood that’s dropped at the dock where he ties up, and which gets him through the winter. Card stays warm with high-efficiency, thermostatically controlled Monitor heaters and plugs into electricity at the dock; two heat lamps on his water tank thermostats keep them from freezing in the winter. 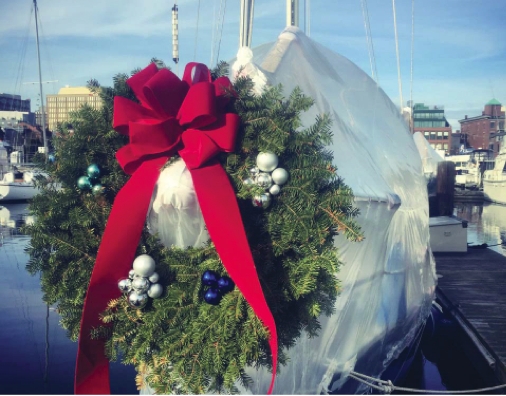 Leah Kruger and Jonathan Tetro decorated the bow of their boat for the holidays. Photo by Leah Kruger While some might think this lifestyle is cheaper, think again. Between slip rental, boat maintenance, perhaps a mortgage on the boat, and utility bills for those living at marinas, some liveaboards estimate their costs are close to an apartment rental.

Husband and wife Matt Garand and Skye Waterson live aboard Polynya, a 1977 Gulfstar 50. Both are lifelong sailors, Maine Maritime Academy alums, and professional mariners who have worked in the Gulf of Mexico’s oil and gas fields. Garand currently splits his year between Portland and Philadelphia, where he drives a tugboat. Waterson works at Hamilton Marine in Portland. When they married, they knew they would want to do long cruises, so purchasing a boat rather than a house was the right investment. They moved onto Polynya in September 2015, tying up at South Port Marine. 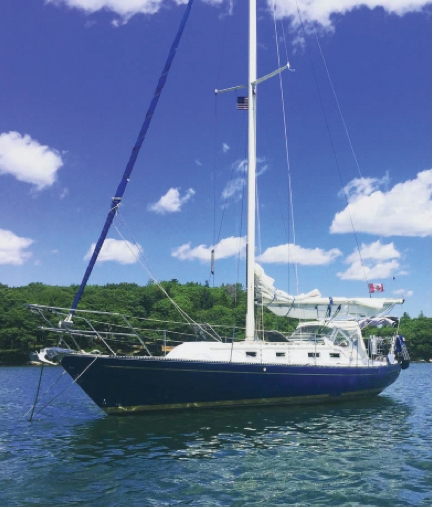 Leah Kruger and Jonathan Tetro have been sailing their Nor’West 33 sailboat, Brio, for five years, settling in for the past winter in Portland. Photo courtesy Leah Kruger One of the first things Garand did was install a robust Olympia OL-60 heating system that runs, via four self-regulating thermostats, off diesel fuel plumbed from the boat’s 100-gallon main tank. The system burns about one gallon per day under normal winter conditions, and nearly two gallons per day during rare days of extreme chill. On his blog, “A Life Aboard,” Garand reported toasty success.

“The unit fires up quickly and begins circulating hot water to the radiators within moments,” he wrote. “Since the radiators utilize 12V fans to distribute heat, the air in the cabin warms quickly. With our four different zones we are able to heat each space to different temperatures when necessary. This is handy, for example, in the forward cabin, which we keep at 50 degrees when not in use to reduce fuel consumption. The engine room is also a separate zone, which I have set to 50 degrees to prevent plumbing from freezing.” 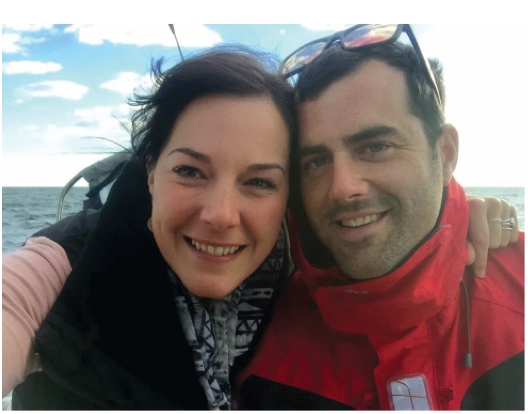 Leah Kruger and Jonathan Tetro. Photo courtesy Leah Kruger Leah Kruger and her husband Jonathan Tetro also grew up sailing. As a child, Kruger lived on a sailboat for seven years and circumnavigated with her family. The couple bought a Nor’West 33 sailboat, Brio, in Mexico five years ago, cruised along Central America, through the Panama Canal, around the Caribbean, then on up the East Coast to Maine, where Tetro grew up. Now they’re docked at DiMillo’s. On weekdays, Kruger heads to Idexx Laboratories, the animal health products company in Westbrook, where she works as an instructional designer. Tetro is an independent contractor.

Last year was the couple’s first winter in Maine, and was “definitely interesting,” said Kruger. “To be honest, I was really afraid. But it’s its own kind of adventure.” 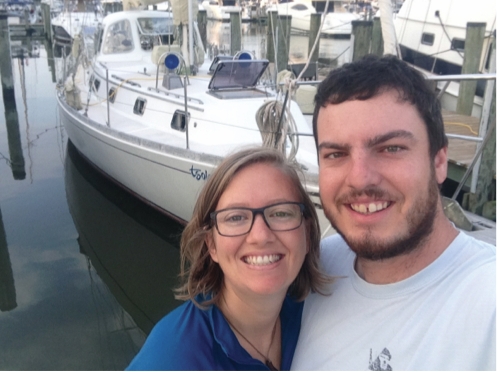 Skye Waterson and Matt Garand have been spending the year aboard their boat Polynya, in Portland. Photo courtesy Matt Garand Having cruised in the tropics, the boat wasn’t set up for a Maine winter. They insulated from the waterline up with high-density foam, and heat primarily with an oil-filled electric radiator. For supplemental heat on really frigid days, they also installed a Newport Dickinson diesel heater that runs off the main tank, using about one gallon every six hours. Everything worked well last winter.

Like many winter liveaboards, these two couples create a tent of clear shrink-wrap above decks. Tetro built a tall space with a 40-foot by 40-foot plastic sheet that’s supported by the boom and four lengths of PVC pipe bent into arches. He built a full-size door into the tent, which can heat up to 80 or 90 degrees on sunny, single-digit winter days.

“It’s awesome because the shrink-wrap triples our living space,” Kruger said. “We can sit outside on a sunny day and be completely safe and warm. And we have more storage space.”

Winter does have particular difficulties, chief being water access when a marina shuts off the dock spigots. DiMillo’s keeps one spigot open at the head of the dock, so Kruger and Tetro run a 200-foot length of hose to their tank. They and others also use the marina’s shower/laundry facilities. The marinas keep the docks clear of snow, but freezing sea spray can be a problem. Garand and Waterson wear flotation and ice cleats when they leave Polynya during stormy weather.

Liveaboards must follow certain rules and regulations. DiMillo’s Marina, for example, requires that boats be operational.

“You have to show you’re not living in a floating wreck; you’re actually on a boat that you use as a boat and not just as a house,” said Kruger. “But it’s still a pretty open lifestyle, without a ton of rules, which is part of the appeal.”

Sitting with Card on Camelot, it’s evident what makes this a lovely life. Although the city and its attractions are just at his back door, there’s a quietness on the boat—the faint shushing of the breeze, the cry of gulls. The sun streams down, the harbor beyond beckons. 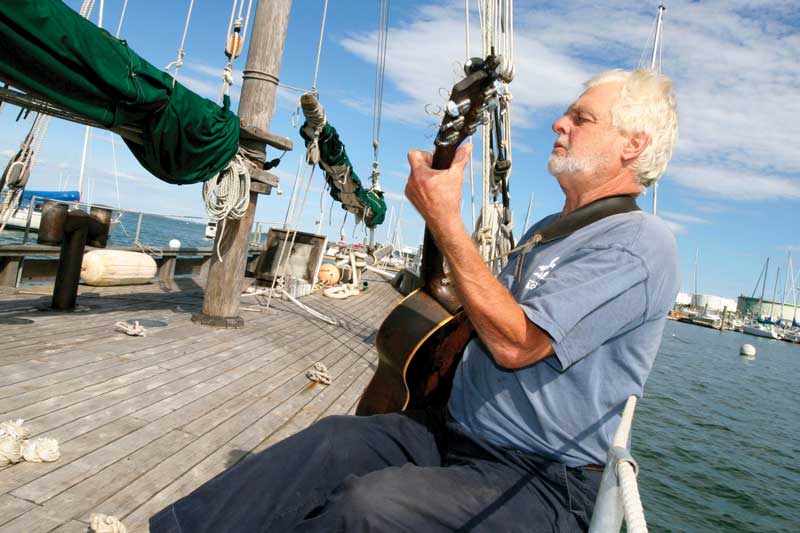 One day last fall, Jeff Aumuller was sitting topside with his 1950s Gibson guitar playing one of his tunes, a chantey about being out sailing: “Dance with me, Blue Lady. Steering by the heavens above, way out here, beyond the tides.” The breeze was light, the air had that salty aroma, yachts and tour boats roamed the harbor. The sun warmed the old wooden deck. 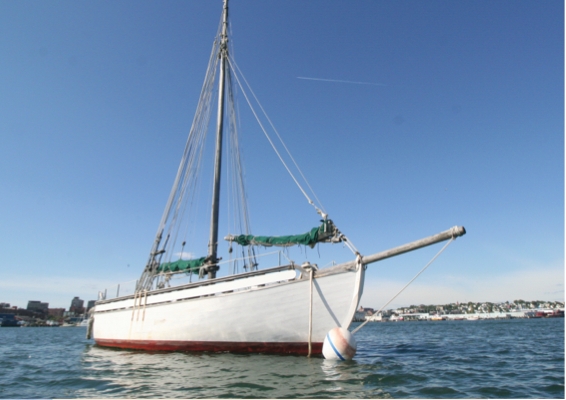 Aumuller’s old Colin Archer schooner is a unique sight along the Portland waterfront. Photo by Laurie Schreiber Aumuller was in his 30s when he transitioned to year-round life on the water. He started a business making sea bags, did quite well, and bought his Colin Archer. The vessel once belonged to sailor Harry Etheridge, who created the Yachtsman’s Guide to the Bahamas. Aumuller sold the business after three years, moved to Cape Porpoise to focus on music, then moved to Portland. He also periodically cruised the East Coast, either on Grebe, or doing boat deliveries to earn cash.

“I just love playing music,” he said. “Otherwise, I’d be in the Caribbean drinking rum.”    —LS