Just inside the entry, off the mudroom, a pocket door leads into a private room with a glorious view of Rangeley Lake. This is where the lady of the house does her quilting. In a home of open, flowing spaces, this efficient room devoted to cloth, patterns, thread, work surfaces, and storage resulted from one of several specific requests the homeowners made of their architect.

In addition to a comfortable three-bedroom home, the owners wanted a place for family gatherings, the sewing room for her, a swimming pool for him, screened porches, an attached garage, and a media room, all in an open concept with lots of light on a piece of land that fell steeply down to the water’s edge.

“He totally ‘got’ us,” the homeowners said about their architect, Robert Knight, AIA. “This was not an easy building site, and we had very specific demands…. He did it all and made it look easy.” 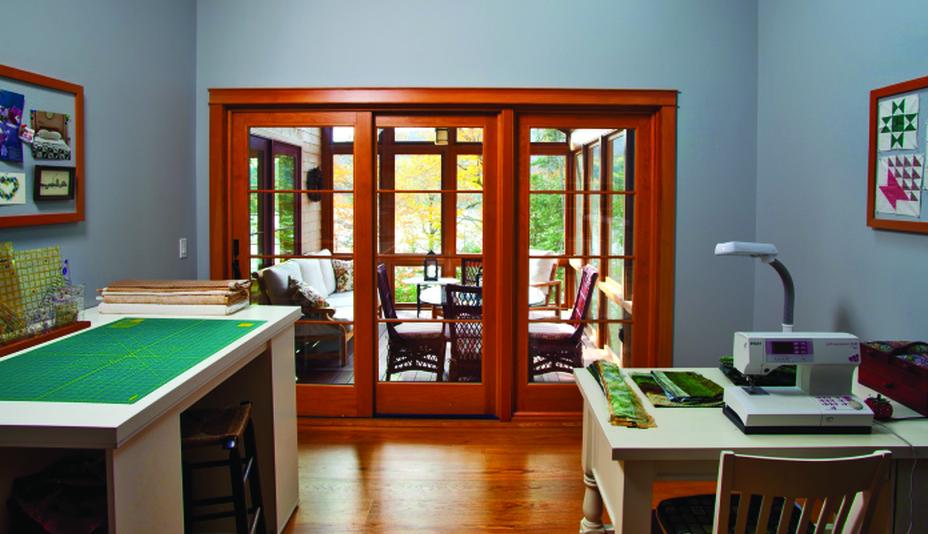 Designed for work, the quilting room is private and carefully laid out. Here, as in the rest of the house, the hickory flooring adds warmth.

The couple used the land for many years as a seasonal retreat—skiing in the winter and enjoying the lake in the summer—staying in one of two 1920s log cabins at the lake’s edge.

When they first decided to retire year-round to the site, the thought was to redo the classic cabins. 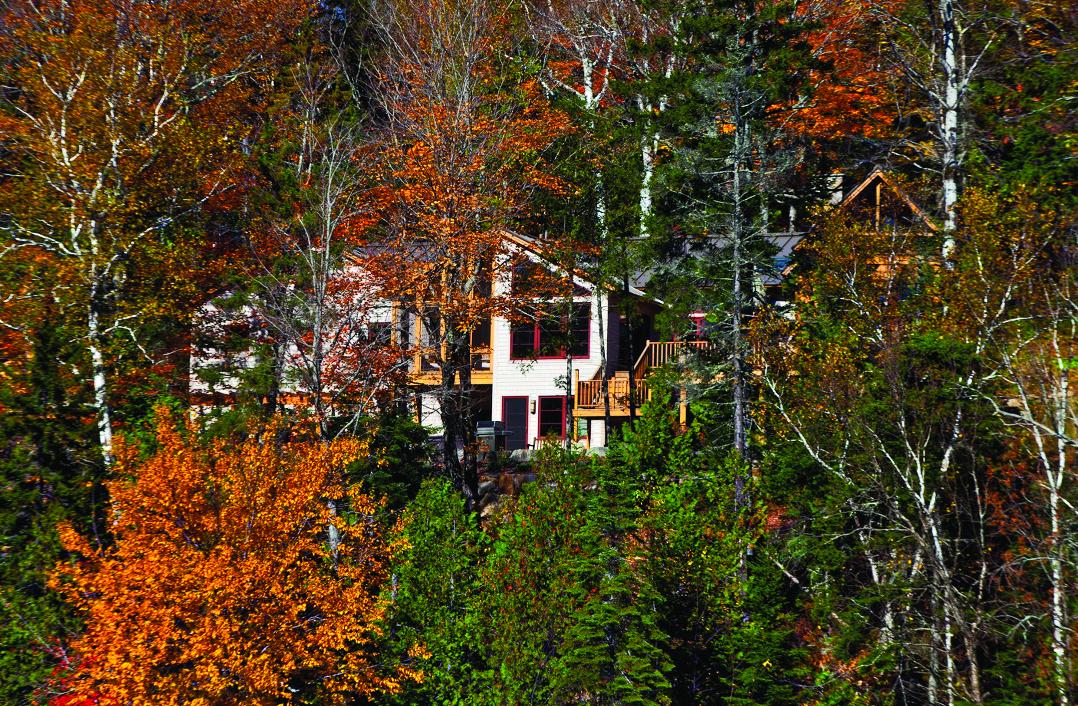 While the views from the house are wonderful, it is barely visible from the lake.

“Those log cabins are nice, but not adequate for winter,” Knight said. “They did not have the structural strength for conversion to year-round living. The houses we design for places like Rangeley, Maine, are driven by the harsh winter conditions. For example, we designed the roof of this house to hold at least 100 pounds of snow per square foot.”

When it became clear that they would build a new house instead of trying to make do in the old cabins—which are still at the edge of the lake and used as rental properties in the summer—the homeowners began to interview architects.

“We talked with five architects, all of whom do beautiful work and came highly recommended,” they recalled. “We picked Bob because we liked him. Unlike other architects, he did not talk down to us.”

Knight, who has run his practice out of Blue Hill for 40 years, specializes in residential design. 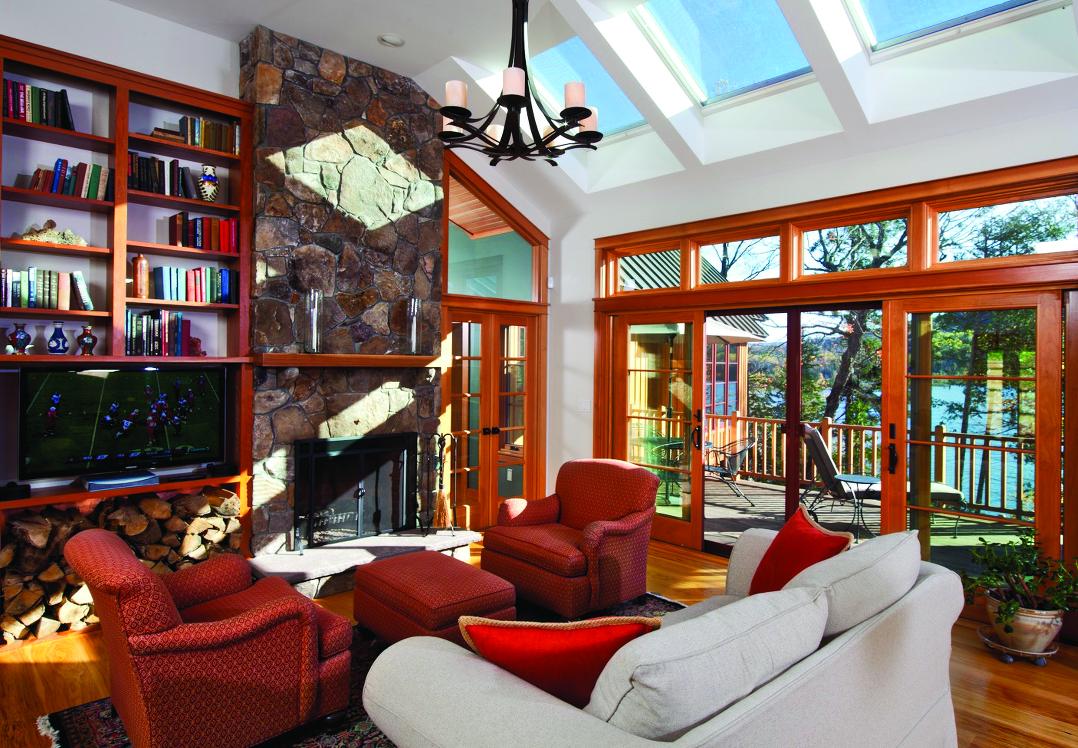 The soaring living room, full of light, is at the house’s center. “People ask me, ‘Don’t you want to do a library or a courthouse?’” he said. “But I tell them that when I design a home, the client sits across from me; it is very direct, as compared to working with building committees and focus groups.”

Also key to the job, which was completed in 2011, was finding the right contractor, in this case Keith Webber Construction of Rangeley.

The U-shaped home has wings that extend toward the lake from both sides of a central block. In the middle space, the living room flows into the kitchen and dining area, with its view though large sliding doors to a deck and the lake beyond. Additional light floods into the room from three large roof windows in the soaring ceiling. A fireplace set into a fieldstone chimney is flanked by built-ins including bookshelves and wood storage. Another fireplace on the other side of the chimney warms a study. 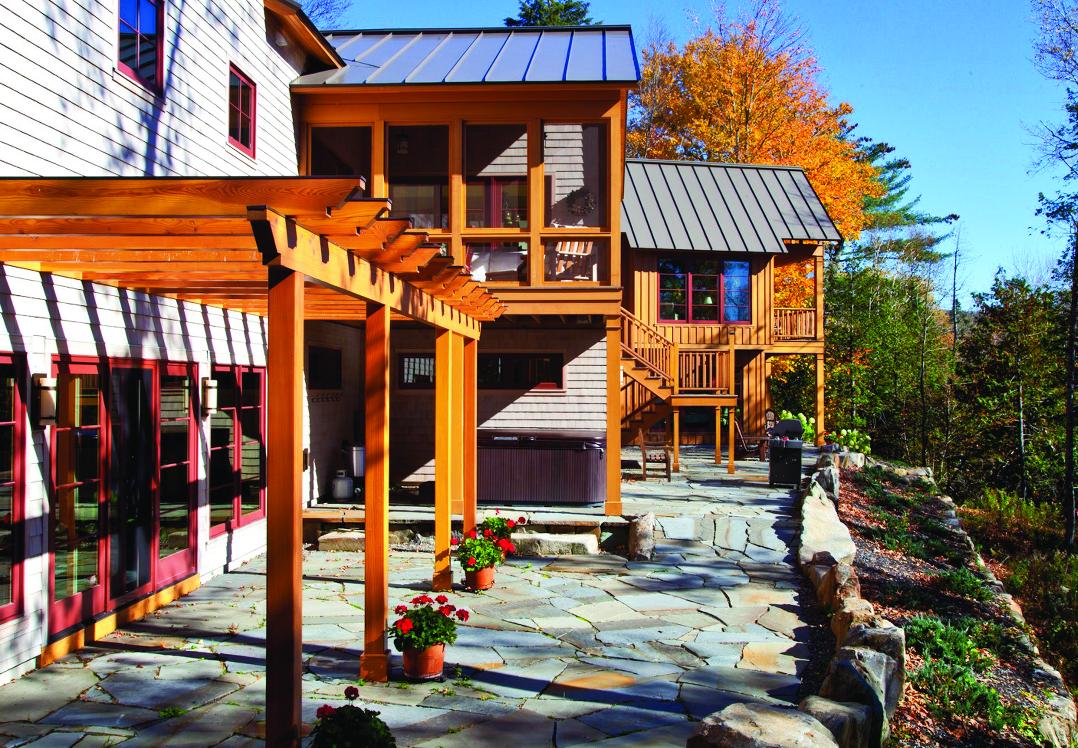 The house site is a shelf carved into the side of a steep hill. It provides just enough space for terraces and porches overlooking the lake. One of the wings contains the swimming pool, garage, and systems—such as a wood-burning gasification boiler. The other wing is dedicated to a master bedroom with a private deck and a bathroom that features a steam shower and a soaking tub.

The downstairs level, built into the steep hillside, has two guest bedrooms, a large family room with a kitchenette, and a home theater. From there, doors lead out to a patio and to paths heading down to the lake.

Another request from the homeowners was that the home be energy efficient. Knight designed a super-insulated envelope with high-quality windows and doors and a lot of passive solar gain; the side of the house that faces the lake has a southern exposure. The retired man of the house finds the time to keep the wood boiler stoked—a separate metal-roofed woodshed holds three to four cords of firewood. A back-up generator delivers enough electricity for three to six weeks in case of an emergency. 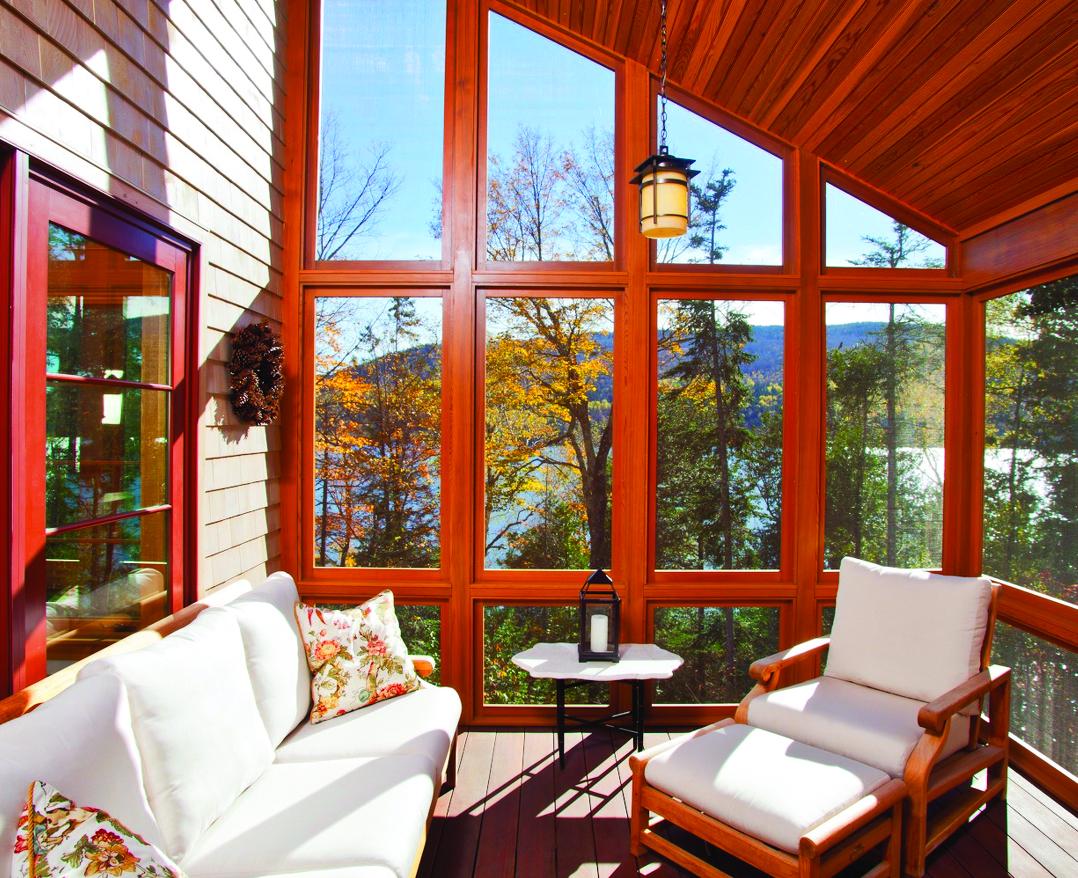 Two screened porches provide peaceful places to sit and enjoy the surroundings at all times of day or night. One is off the dining room; this one adjoins the master suite. The steepness of the land made the site challenging.

“We situated the rooms to utilize the lakeside location and to make the most of the beauty of the views,” Knight said. “From the water, however, we did not want the 4,400-square-foot house to look monolithic, so we changed materials so it would read like several sections. While the views towards the lake are stellar, the house is nearly invisible from the lake itself.”

The homeowners are especially proud of their new kitchen, which features soapstone counters, cherry cabinetry and, like the rest of the house, hickory flooring. In a house traditionally framed with Douglas fir, heavy loads like the swimming pool are made possible via the use of high-tech slabs of reinforced concrete. A few steel beams keep the wide-open spaces intact. 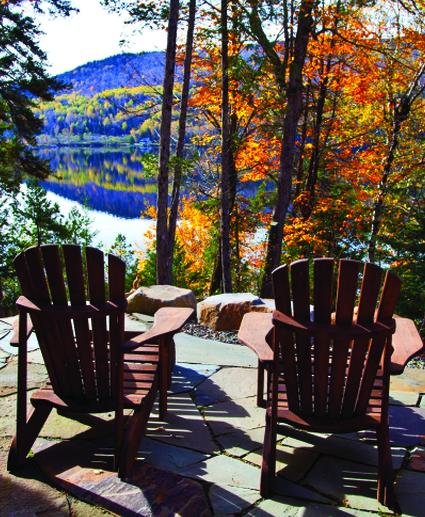 Stone patios extend the living space into the natural world and provide the perfect perch to enjoy the tranquil view of the lake. In the summer, the owners grow vegetables, go canoeing, hike on the miles of surrounding trails, and sit on the patios that were created when this house lot was carved out of the hillside. Wintertime is for skiing, snowmobiling, and snowshoeing, and for sitting by the fire. At all times of year, the view is compelling, beautiful, and the feature of every room.

Regina Cole is a freelance writer living in Gloucester, Massachusetts. She writes about architecture, interior design, and the history of the American decorative arts for many national and regional magazines.