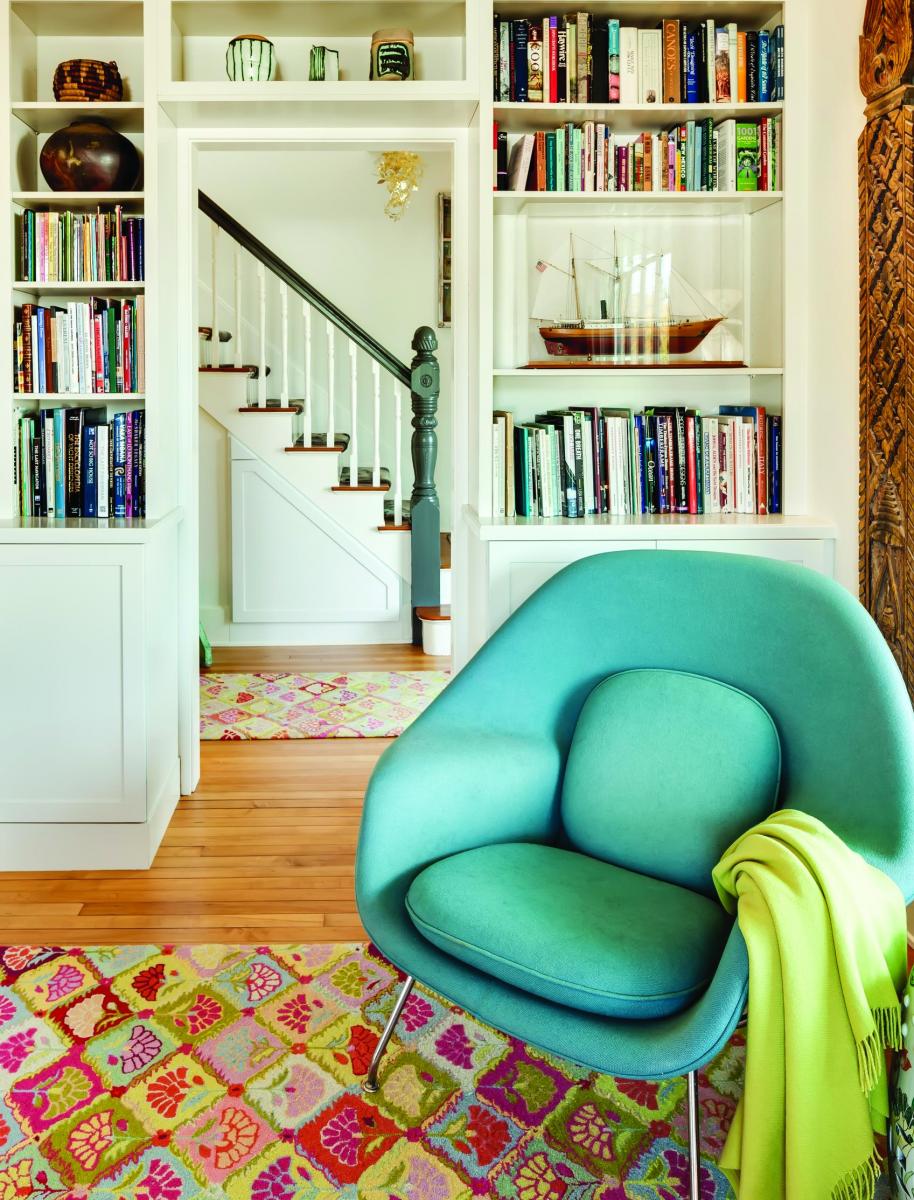 The main living areas of the house are open and airy with plenty of built-ins including bookshelves. Steve Thomas is a boat guy. Of course he’s also the former host of PBS’s This Old House and Discovery’s Renovation Nation—but he’s as comfortable with a winch as he is with a wrench, and has thousands of sea miles under his tool belt. Long before he spent more than 15 years showing viewers how to breathe new life into old houses, he was messing about in boats.

“I surfed and sailed as a kid in southern California,” he recalled recently. “My first boat was an 8-foot Sabot sailing dinghy.”

Steve went on to race between the West Coast and Hawaii, and to serve as first mate on the classic, 103-foot schooner Fair Sarae in the Mediterranean. He worked as a ship’s carpenter in France, and sailed a 43-foot RORC sloop from England to the Caribbean, through the Panama Canal, and on to San Francisco.

In the 1980s, he spent time on Satawal Island in Micronesia, living and sailing with the elders to learn how they steered by the stars, waves, and birds. He later shared that experience in a book and documentary film, both titled The Last Navigator.

It’s only natural that lessons learned in all that time afloat would inform Steve’s approach to life ashore. The clever design of boat interiors, for example, taught him that a home doesn’t have to be big to be comfortable.

“Living well is more important than living large,” he declared while giving an informal tour of Sea Cove Cottage. He and his wife, Evy Blum, have just completed a two-year renovation of the 1,300-square-foot home built in 1905 by a fisherman in the St. George village of Port Clyde.

Today, the view is strikingly similar.

“I think of our little house as a big yacht. Just as on a boat, we used every bit of space,” Steve explained, sliding open a deep drawer hidden in the staircase to reveal pairs of snow boots lined up inside.

Accompanied by Emma and Marley, the couple’s black standard poodles, he and Evy pointed out more ways they’ve optimized space. In a kitchen drawer, a cutlery tray slides back to reveal a lower level for utensils. In the upstairs hall, a trapezoidal linen closet snugs up to an angled chimney. In the master bedroom, a built-in settee turns an oddly shaped niche into a cozy reading alcove. 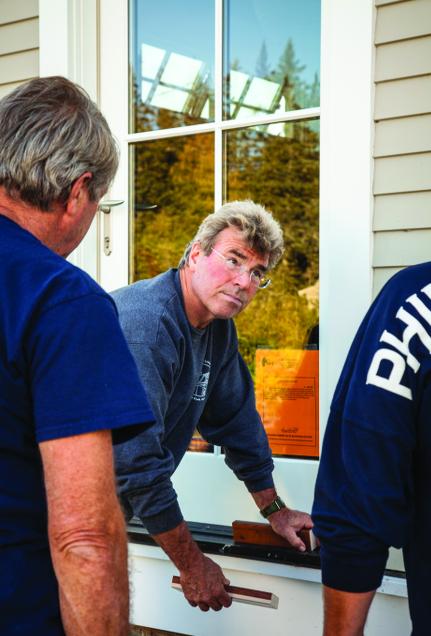 Steve Thomas confers with carpenters helping with his home renovation. Even so, the house is small. That meant Steve and Evy had to do some serious downsizing and purging.

“We used to have clothes,” Evy said, with a laugh. In addition to their former wardrobes, they gave much of their book collection and household items to second-hand shops. They are especially enthusiastic supporters of Habitat ReStores, home-improvement and donation centers operated by affiliates of Habitat for Humanity International.

“We featured Habitat in some This Old House segments,” said Steve. “I continued to follow them. I liked what they were doing. The houses were getting greener and greener. They fix up old houses as well as build efficient new ones. About four years ago, I approached them, saying I wanted to be involved.” Today, he is spokesman for Habitat ReStores.

In the past three decades, the old-house guru has rescued ten homes on his own. “I’m a serial renovator,” he confessed.

At Sea Cove Cottage, he and Evy replaced major sections of the foundation and sills and did much structural reframing. They refreshed the exterior with new roof shingles and cedar clapboards, but kept the windows’ original placement and muntin patterns. The porch looks much as it always has, too, except its floor is now made of maintenance-free cellular PVC, with a photo-realistic top layer that mimics wood grain.

“And I’m a wood guy,” Steve acknowledged. “But in this harsh, wet climate, a wooden porch condemns you to yearly painting.”

High-density foam insulation and LED lighting have helped make the house “super efficient,” said Steve. Inside, he and Evy retained the layout while brightening the walls. “We tried to patch and save the plaster,” Steve said, “but it was crumbling.” 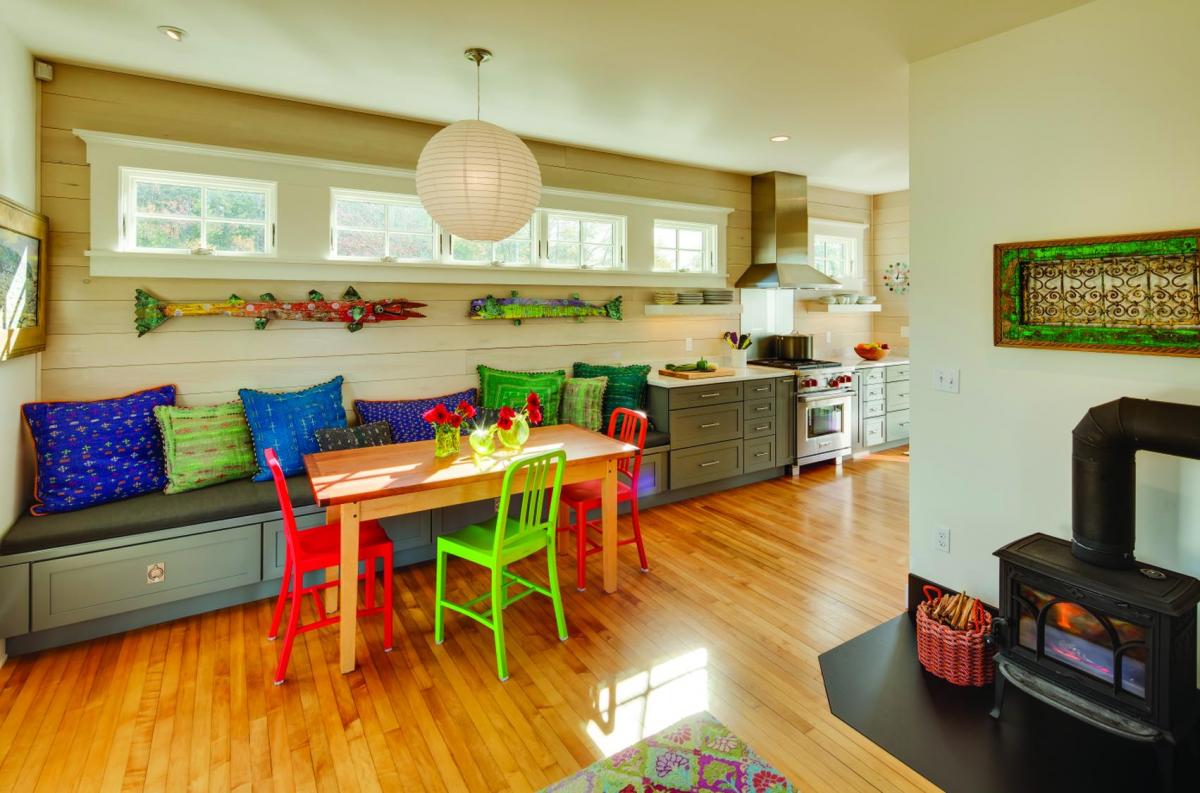 Some interior walls were removed to open up the kitchen and dining/sitting areas.

A new kitchen with whitewashed shiplap walls is fitted with “factory-custom” KraftMaid cabinets and drawers, a Wolf range, and a Sub-Zero refrigerator. “When you’re working with a small space,” Steve said, “it’s important to use high-end stuff.” 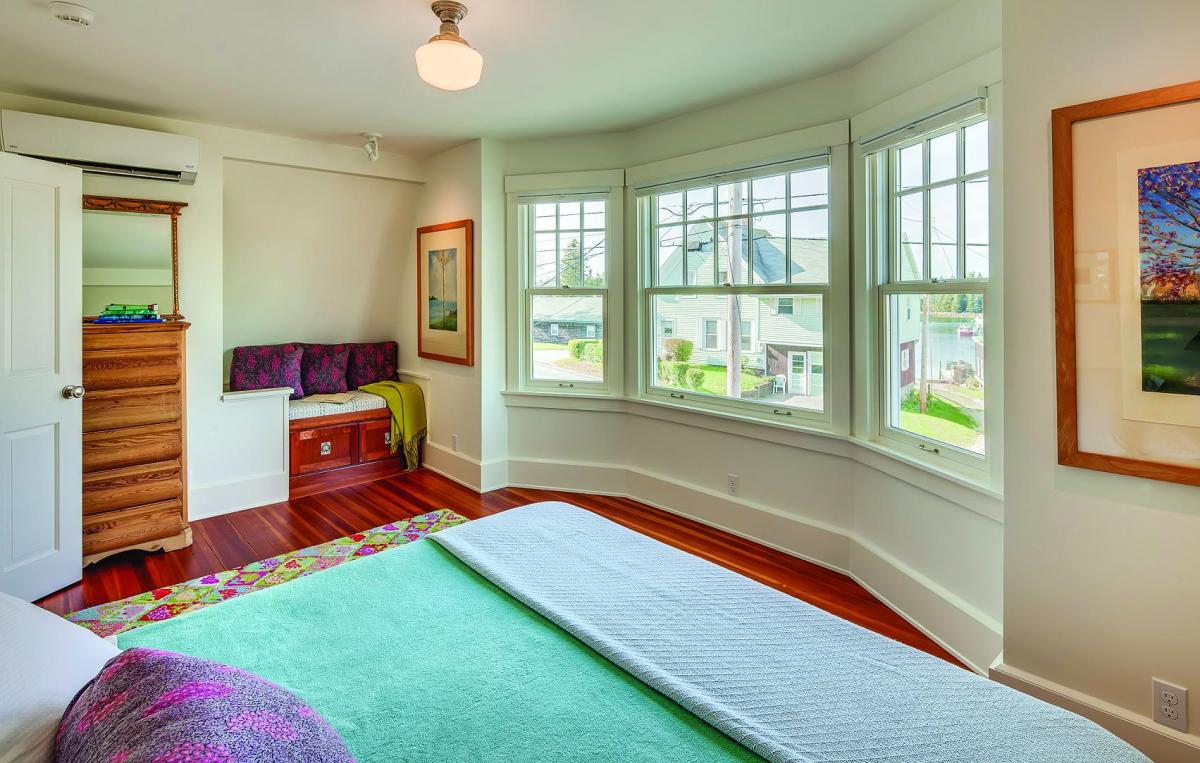 The house’s small size means that no space is wasted. In the master bedroom upstairs, a built-in settee turned an awkward corner space into a cozy alcove.

There are three modest bedrooms upstairs; Evy uses one as an office for her wealth-management business, Marshall Point Advisors. On the lower level, a walkout basement is now a fourth, garden-level bedroom.

The couple’s ties to Port Clyde go back to 1998, when they bought a ranch house on Hupper Island, in the outer harbor. It was “a fixer-upper built with spare parts,” Steve remembered. 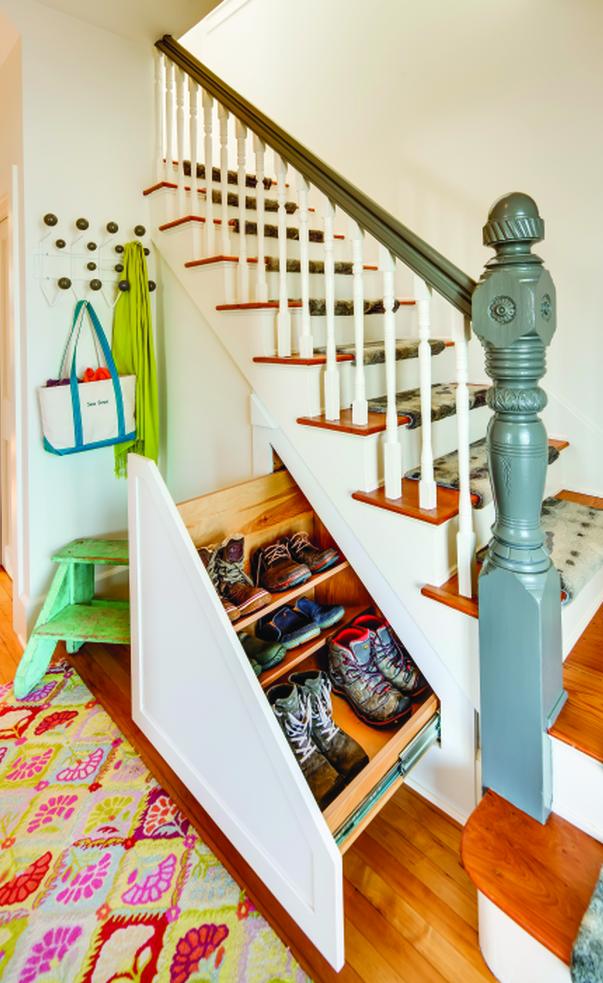 In the area under the stairs, a special drawer holds shoes and boots. With thoughtful renovation, it’s now an attractive shingle-style cottage where they live spring through autumn. If they considered making it their year-round residence, however, they quickly dismissed the idea.

“In the winter, the conditions between here and our dock on the island can look like a rough sea in mid-ocean,” said Evy.

For some years, they spent winters in an adobe house they’d renovated in Santa Fe, New Mexico, before deciding to live on the East Coast full time. Evy is a native New Englander, and Steve has happily adopted this neck of the woods. They previously lived in a 3,700-square-foot Colonial they’d restored in Salem, Massachusetts. But the idea of returning to Boston’s bustling North Shore didn’t appeal. Maine did.

Evy’s affection for the state began when she went to camp here as a girl. Their son, now grown, attended Camp Kieve in Nobleboro. Together, the family spent a number of summers in a rented cottage on Monhegan Island.

It was decided: They would winter in Maine. They house-sat for a season in the Portland area, and considered buying a home there. But Port Clyde kept beckoning.

Evy said she finally declared, “We should live in the village.”

They planned to offer their winter home, wherever it was, for summer rental. With that home right in Port Clyde, they could easily come ashore from Hupper Island to welcome their rental guests. It would also mean they could pop out to the island for late-spring and early-fall weekends.

As much as Steve and Evy live in the heart of the village, the village also lives in their hearts. They are active members of the community, and used local subcontractors and landscapers on the renovation project. Steve might be seen leaning against his Ford F-250 outside the house, talking with a neighbor about a hot article on the town warrant. An ardent proponent of green initiatives—they recycled all cast-off materials from the renovation—he’s particularly proud of the town dump. “It’s ranked in the top ten in the nation for recycling,” he bragged.

Settled into Port Clyde, the couple’s time on the water is limited these days to daysails on friends’ boats and commutes between Hupper Island and the mainland in his-and-hers skiffs. But Steve still dreams of messing about in boats.

“Steve is always thinking about ‘The Perfect Boat,’” Evy said.

“I’d love to have another one,” Steve admitted. “Maybe now that the renovation is complete,” he added, flashing his familiar grin.

Whether or not he finds his “perfect boat,” it’s clear Steve and Evy have found the perfect anchorage: an efficient little Maine house that’s just right for a boat guy.

In His Own Words

Going green as cost-effectively as possible

The term “green building” is relatively new, but the concepts are not. We used to call it “sustainable,” “low impact,” or “energy-efficient” building. Whatever the term, my objective at Sea Cove Cottage was to go green as simply and cost-effectively as possible.

Energy efficiency is the first rule of green.

Build it right and you have a house that lasts a long time and stands up to the Maine climate with minimal maintenance.

I used the best quality materials throughout—not necessarily fancy, but high quality. My mantra is: “I’m willing to pay for it—but only once.” I used wood where I needed to for exterior sidewall shingles and clapboards, but switched to PVC for the trim boards and porch decking for longevity and low maintenance.