A son designs an efficient home for his parents 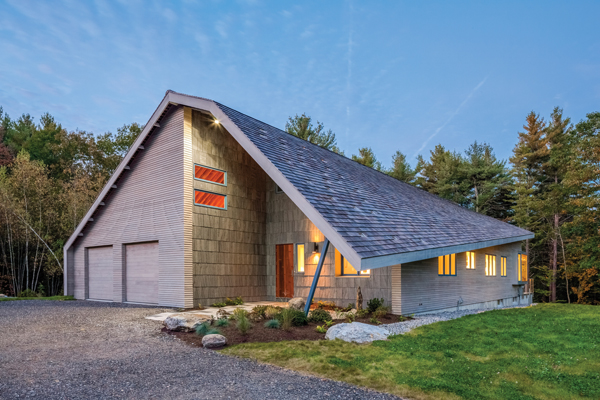 By Donna Gold Photographs by Brian Vanden Brink As the morning sun sheds its light over the hillside, Alan and JoNell Solander settle beside the large box windows of their new house, watching turkeys gather in the fields. Their cat sleeps on the wide windowsill, its tail brushing the pair of binoculars that Alan reaches for to watch a deer rustle through the woods. After a lifetime of service, the Solanders relish the lovely serenity of their new life on a back road in Falmouth. Spacious and light-filled, built for maximum sustainability and minimal maintenance, there’s something even more special about the Solanders’ home. It was designed by their son, architect Carl Solander, of Reverse Architecture in Somerville, Massachusetts. 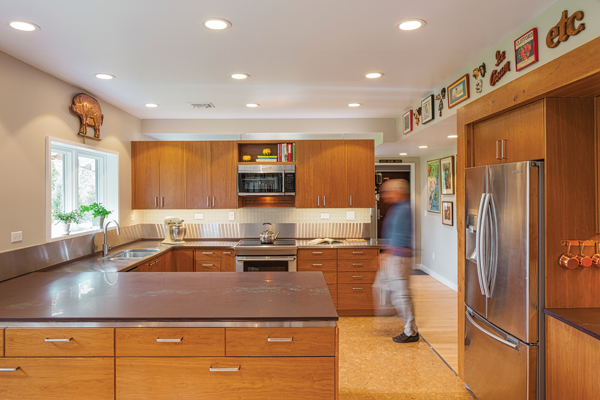 The kitchen is designed for easy accessibility, with an opening to the living room, allowing a view out the back window.
For 30 years, the Solanders lived in West Auburn, Maine. Alan worked as a pathologist; JoNell stayed at home and raised three children. She describes their former home as a “dressed-up” farmhouse on two acres of field. Built a century ago, it offered them, said Alan, “a never-ending opportunity to love the house—financially.” Eventually they decided it was time to turn that responsibility over to someone else. They wanted to be closer to Portland’s cultural and dining options and to make it easier for their out-of-state children to visit. Mostly, though, they wanted a house with no gutters to clean, no beams to replace, no wood to paint. Both parents thought it would be lovely if their son could design their new home. When they found land in West Falmouth, the three began planning. 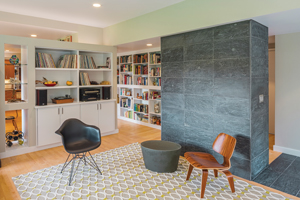 The living room divider separates public from private space and offers closet room behind. Here the Solanders read, listen to music, and watch wildlife in the fields outside.
For Carl, who launched Reverse Architecture in 2007 and also teaches at the Massachusetts Institute of Technology, it was a fantastic opportunity to “give something back to my parents—a return on their investment in me, as it were.” Their closeness also gave him essential insights, he said. “Seeing how people are affected emotionally by the whole process—design, construction, finances—has helped me to become more sensitive with other clients.” His parents did have some concerns. Said JoNell, “Our son’s taste ran more towards modern, and ours didn’t. He came up with this idea, which he called modern rustic, which has the features of both—and somehow it all seems to go well together.” The single-story home’s hallmark is a massive, steeply pitched roof. It nearly touches the ground at the entrance, then slopes up toward the back to flood light into the rooms. The striking roof angles provide the home’s name: The Zigzag House. Although the Solanders were seeking to escape the worry of a house falling down around them, they enjoy the idea that their new home’s greying shingles and modern sturdy roof reference nothing so much as an old collapsing barn, so frequently seen in Maine fields. Outside, the entranceway’s steeply sloping roof covers a dramatic exterior foyer enhanced by the rectangular holes Carl cut into the roof so that light shines in and also plays against the outside slate-covered wall. JoNell delights in the constant variations of the light on the wall, changing according to the time of day and the season of the year, likening it to a sundial.

The light playing off the entranceway (left) and the way the pop-out windows bring the outside in (right) are among the most special aspects of the Solander home.
Oriented to take advantage of the sun, the 2,000-square-foot home is heated and cooled by three geothermal wells dug about 130 feet into the ground. The attic is piled with cellulose insulation, giving it an R-value of 100. “It looks like a giant snowdrift inside,” said Carl. The walls have an R-value of 30. The home also features LED lighting and low-flow water fixtures. Alan finds that his energy costs have been reduced by 60 percent when compared with their home in Auburn. The roof’s steep pitch means that Alan never again has to climb up to brush snow off or worry about ice dams. Nor are there gutters to clean. The weathered shingles require no painting. The ground outside the home was planted with meadow grass and clover, so there’s only minimal mowing. Maintaining the geothermal system is also rather simple. The filters must be changed two or three times a year, and once a year the pump must be cleaned with a hose. “I just find it a pleasure,” said JoNell. “The wonder and joy when you first move into a house—you get used to it, but when I walk into this house, and see the light playing on the wall, I find this is just really beautiful—and our son built it for us, so it’s very gratifying on many levels.” Donna Gold lives in a century-old home overlooking the Penobscot River. And yes, it offers her many opportunities to “love” it. Project Team Architect: Reverse Architecture, Somerville, MA Principal: Carl Solander, AIA 617-440-3622, www.reversearchitecture.com Structural Engineering Consultation: Sarkis Zerounian, Newton, MA | 617-965-2318 Landscape Design & Installation: Gnome Landscapes, Falmouth, ME 207-781-2955, www.gnomeldm.com General Contractor: Tozier Group, Falmouth, ME 207-838-7939, www.toziergroup.net