Bill Lowe shapes a piece of equipment on a manual lathe. He often designs custom tools to facilitate different designs.

By Polly Saltonstall | Photographs by Donna Daly The building’s nondescript blue metal siding blends in with that of other nearby warehouses in Rockland’s industrial park. Take a closer look, though, at the distinctive L-shaped handle on the front door. Silver-toned with a mottled pattern on the round grip and delicate chasing at its point, the lever feels wonderful in the hand, and it looks elegant, too. The door may have come off the shelf of the local lumber store, but not this latch. It turns effortlessly and the door clicks open to reveal the place where the lever was made, the headquarters of Lowe Hardware, a small company that is rapidly making a name for itself in the high-end custom hardware business. Founder Bill Lowe of Owls Head started out making special metal fittings for yachts. Now Lowe Hardware has expanded into the home market and is being run by Bill’s son, Elliot, and daughter, Emily. Doorknobs, pulls, hinges, cabinet handles, even fittings for furniture, in finishes ranging from shiny or rough bronze to gold-plated brass or nickel, this hardware both holds a home together and allows access to its inner recesses. 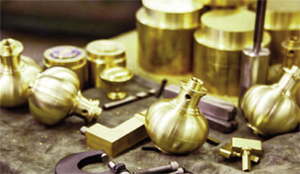 Jewel-like bronze knobs in the foreground are fashioned from solid rods, shown here in the background. The Lowes cut hardware out of solid metal, rather than casting or forging it.
Descended from a family of boatbuilders and yacht captains on Deer Isle, Bill Lowe trained as a machinist, then went to work on various boatbuilding projects along the coast. Eventually he realized he liked designing metal fittings much more than the rest of the construction process. So in 1982 he set up shop on his property in Owls Head and quickly became the go-to person for custom boat hardware, such as cleats, blocks, and winch platforms. Builders knew a good thing when they saw it and soon Lowe was making doorknobs, pulls and other special metal fittings for the interior of high-end boats built at places like Hodgdon Yachts, Brooklin Boat Yard, and the Hinckley Company. “My dad is a simple guy with really good skills. He worked hard and was talented,” said Elliot, who worked for his father during high school, then joined the business in 2003 after graduating from the University of Maine with a degree in engineering. “I took a liking to the interior work,” said Elliot, who was responsible for focusing more of the company’s effort on residential projects. 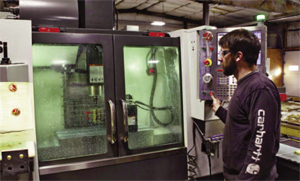 An employee watches as a computer-controlled cutting machine creates a door hinge.
Elliot, 35, runs the company with his sister Emily, who is 36. He designs pieces, programs the machines, and interacts with clients, while she keeps the growing piles of paperwork in order. Their father, who is semi-retired, still comes to work, always accompanied by his mischievous Jack Russell terrier, Max. He specializes in making parts to simplify the manufacturing process. On a recent day, Bill, now 70, hunched over a cluttered desk peering through half glasses at a small carbon metal triangle cutter that he was fitting into a tool. When he was done, he attached the tool to a towering lathe and used it to mill down the edges of a silver-colored tube. The tube was not even a finished product; rather it was a part for another machine. “I come in and straighten things out and then I go home again,” Bill explained. The Lowes’ first big residential job, making door hardware for a huge new home on an island in Penobscot Bay, came about after the owner’s wife saw the company’s products on a friend’s yacht. The architect on that job introduced the Lowes to colleagues in New York, and business took off. In 2009, the Lowes moved from Bill’s barn to a 6,000-square-foot warehouse in Rockland’s industrial park. During 2014, they were completing a 5,000-square-foot addition that will include a local showroom. Their hardware already is on display in architectural showrooms in both San Francisco and New York City, where the bulk of their custom fittings, reproductions and new designs, end up in large penthouse apartments and houses.

Polishing on special buffing wheels gives pieces that extra shiny finish. A sandblasting machine is used to get a matte finish and a wire brush wheel is used for a brushed finish.
“Luckily, there are clients out there who appreciate what we do and how it is done,” said Elliot, talking loudly over the squeals of a grinder in the background. Elliot is mysterious about his customers—“I can’t tell you that” is a frequent refrain. He alluded to a well-known company that has contracted for internal fittings for its finished products and to a European-based pharmaceutical firm that has ordered hundreds of laboratory desk fittings for buildings in Europe and the United States. Lowe products remain standard in boats built by Hinckley Yachts in Southwest Harbor, and most other large custom boats built in Maine. Delta Marine in Seattle, Washington, also uses them. The company makes its hardware using a mix of modern computer-controlled cutting machines and old-fashioned lathes. Stacks of thick rods of solid bronze are piled next to rows of plain rectangular plates on shelves in the open warehouse. While some makers of custom hardware cast their products, Lowe uses cutting and grinding tools to fabricate its pieces from solid blocks of metal. Elliot clearly delights in showing off the machinery. He opened the clear plastic door to a big blue computer-controlled lathe to show me what it does. On one side a clamp holds a gold-toned piece of metal; on the other skinny articulated arms hold various drill bits and cutters. Shiny metal particles the size of sawdust glint in the well below. Elliot can program this machine to grind, cut, or even add patterns to metal. 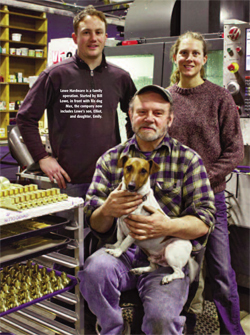 Lowe Hardware is a family operation. Started by Bill Lowe, in front with his dog Max, the company now includes Lowe’s son, Elliot, and daughter, Emily.
“This is really cool; you have to see this,” he said, walking over to another computer-controlled machine, one that is capable of switching tools mid-cut. In less than two minutes we watched it transform a solid rectangle of bronze by adding bevels around the edges and across one end, then drilling small holes and adding threads for screws. Across the aisle, yet another CNC machine turned one piece of bronze into two sides of a door hinge, complete with screw holes. This hinge likely will end up on a door hundreds of miles away, creating an experience with roots in Maine and the boatbuilding world for its owner. Polly Saltonstall is Editor in Chief of this magazine. For More information: Lowe Hardware 5 Gordon Drive Rockland, ME 04841 207-226-7405 www.lowe-hardware.com

One family’s love affair with a Pipe Dream