Mainers love their their ice shacks 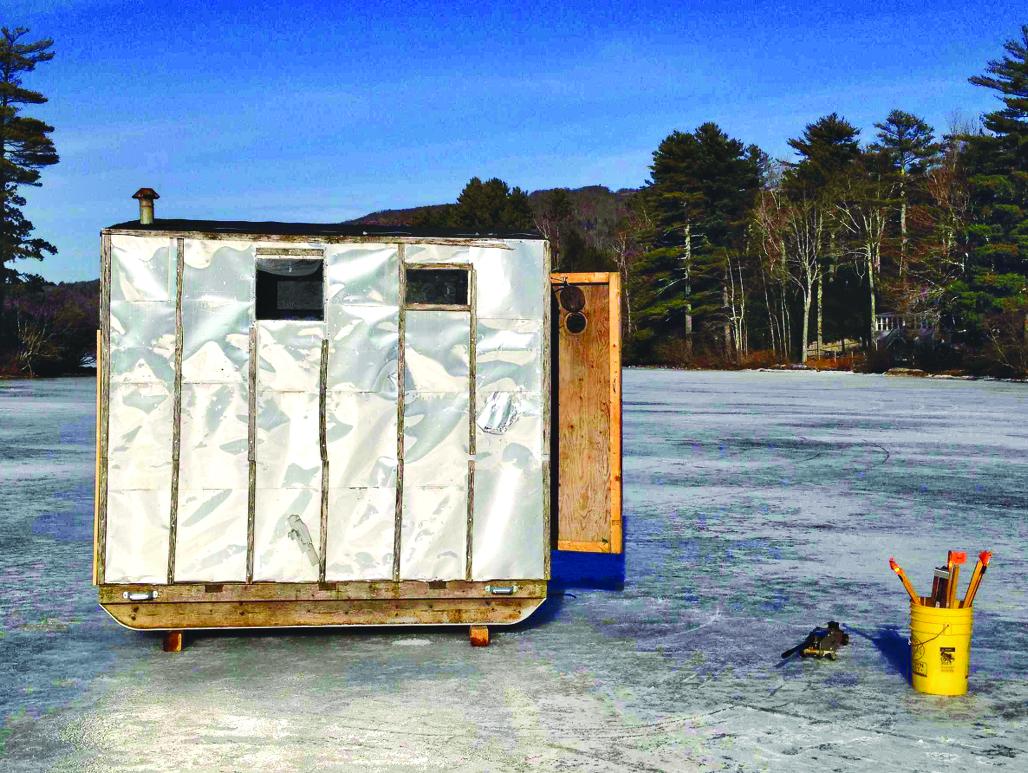 Metal siding, such as on this shack on Camden’s Megunticook Lake, is common. Back in the days when the Rockland newspaper was printed using metal plates, midcoast fishermen sometimes used the discarded plates as low-cost shack siding.

On a glittering day in the middle of February, Todd Hannes of Raymond, Maine, sat in his little red ice shack perched smack in the middle of frozen Sebago Lake—the solitary structure dwarfed by a huge expanse of empty ice. 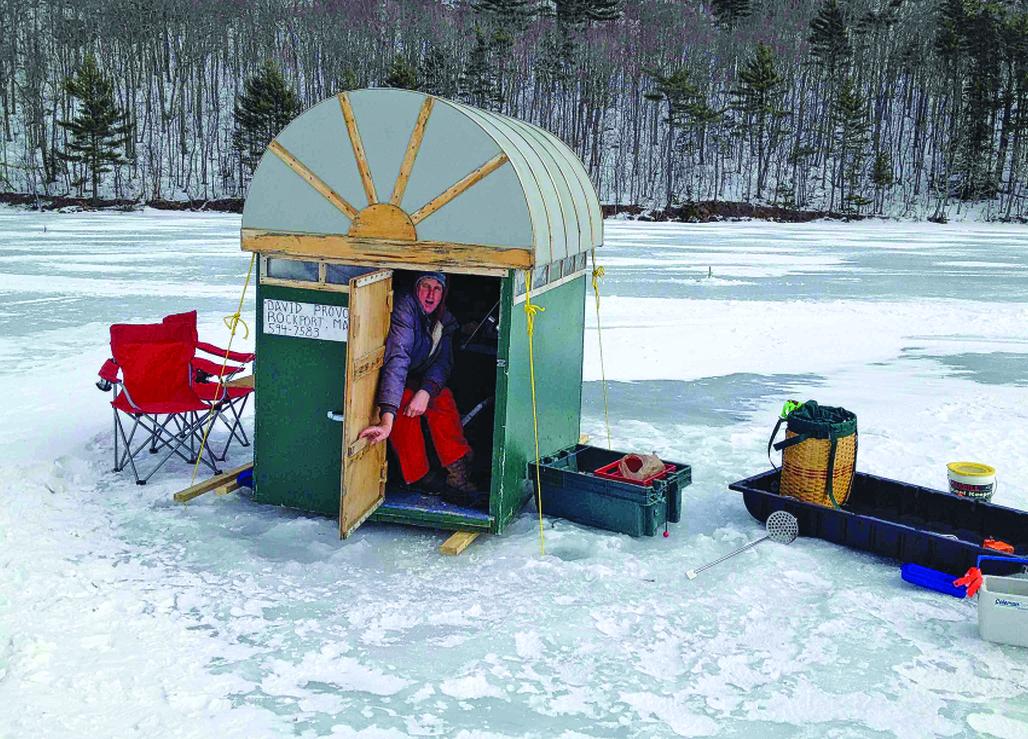 David Provost, a Rockport carpenter, built his hut out of plywood and cedar with a canvas-domed roof. “It’s light and I can set it up by myself,” he said. “I always liked the idea of Quonset huts.” On a sunny day last winter, Provost and some friends were on Rockland’s Chickawaukie Lake. Inside, under a set of antlers on one gable and a fan of partridge feathers on the other, they were cooking eggs and bacon on a wood stove. “When you get a bunch of people out here, it’s fun whether or not you’re catching fish,” he said.

Inside the tidy, 6'x8' plywood building with Plexiglas windows was a bright blue dock chair, a propane heater, and a Coleman stove for cooking. Not a speck of dirt showed on the plywood floor. It was like a grown man’s dollhouse.

The B52s may have their Love Shack. Here in Maine, we have our ice shacks, and they’re just a little old place where we can get together.

Hannes, like many others who build ice fishing shacks, uses his portable plywood house for more than shelter while fishing in frigid cold weather. “I just like hanging with people out there,” he said. “I’ll have friends come by on snowmobiles. It’s just a fun time.” 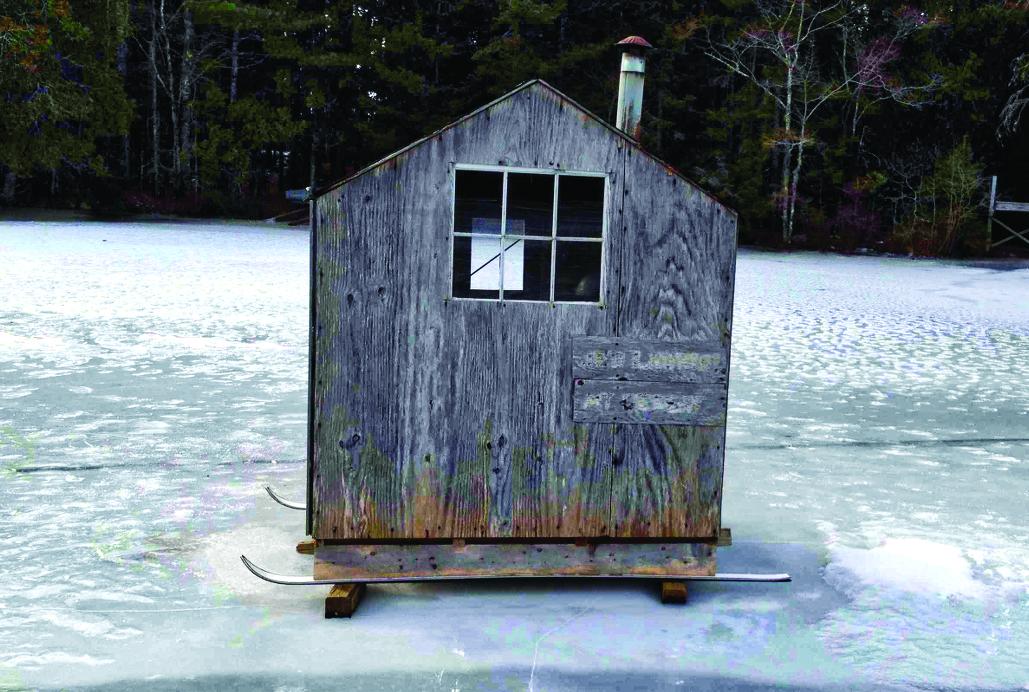 This utilitarian shack was on Long Pond on Mt. Desert Island last winter. Photos above (3) by Polly Saltonstall

To live in Maine during the winter means making your own fun. Hanging out in an ice shack is the equivalent of a summer cookout with friends. These structures provide a place to stay warm on chilly, often windy Maine lakes while waiting for the fish to bite. They also are part of a moveable winter community.

No one really knows exactly when ice shacks first popped up on the frozen landscape. Sanford resident Harold Porter, a lifelong collector of ice fishing tip ups (the part of the line that rests on the ice, often including a small flag which pops up when a fish bites), owns a German etching from 1777 that depicts two men ice fishing with an ice shack behind them. 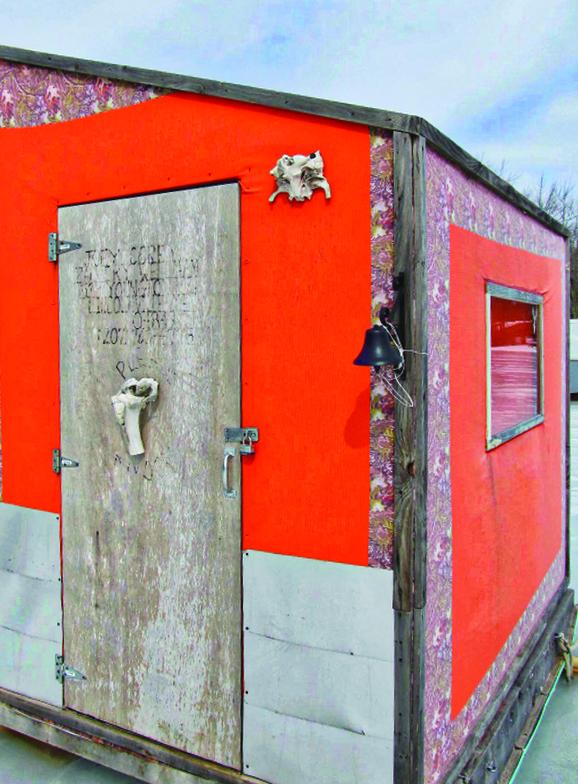 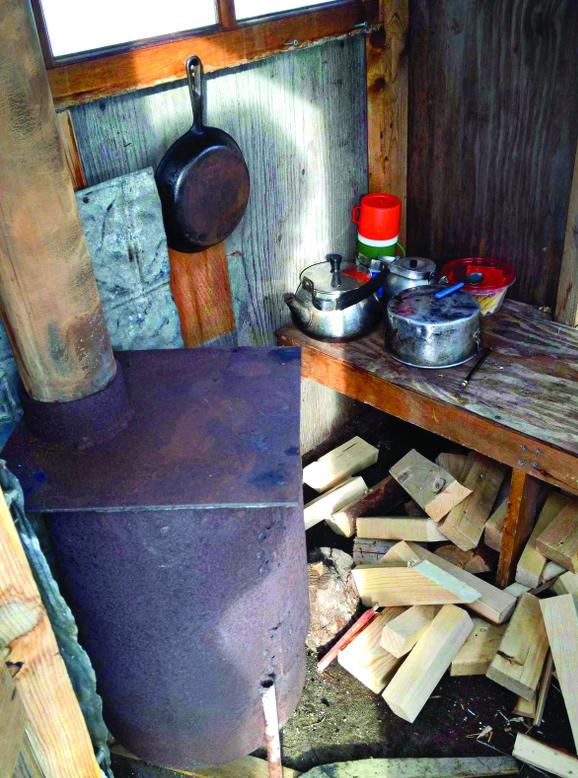 A wood stove, frying pan and wood in a hut on Long Pond on Mt. Desert Island. Photo by Polly Saltonstall

Filmmaker Ryan Brod, a registered Maine guide who grew up fishing the Belgrade Lakes year-round with his father, immortalized Maine ice fishers in the 2012 documentary Hardwater. He believes the first ice shacks may have been built as temporary shelter near shoreside bonfires. Later in the 1920s and 1930s, when automobiles became more prevalent in Maine, fishermen could tow their wooden shacks farther out onto the ice.

Nowadays, these portable houses come in all shapes and sizes. There are neat, spare shacks like Hannes’. Then there’s Shackzilla. That’s the name three guys from the Midcoast gave the black doublewide that sits on Lincolnville’s Norton Pond.

Scotty, who goes by “Just Scotty,” and his friends Will Sutton and Randy McKee built the first half of Shackzilla three years ago. They constructed an addition this past year to serve as a dart room, a place to play cards and, let’s be honest, to do a little drinking. 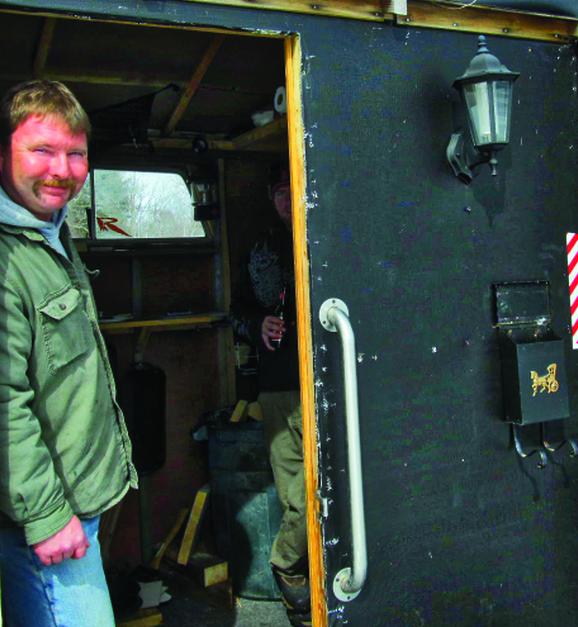 Will Sutton outside his Shackzilla, waiting for mail. Photo by Kay Stephens

On a Tuesday afternoon last winter, they were happy to show off their guys’ club. They had everything a man needed to stay away from his wife, kids, and employer for an entire day: a woodstove for warmth, a cook stove, gas lantern, a transistor radio, and a car stereo with speakers. Some fishing equipment and an ice auger were stored in a corner. Shackzilla even had a mailbox, in case someone wanted to deliver a message. 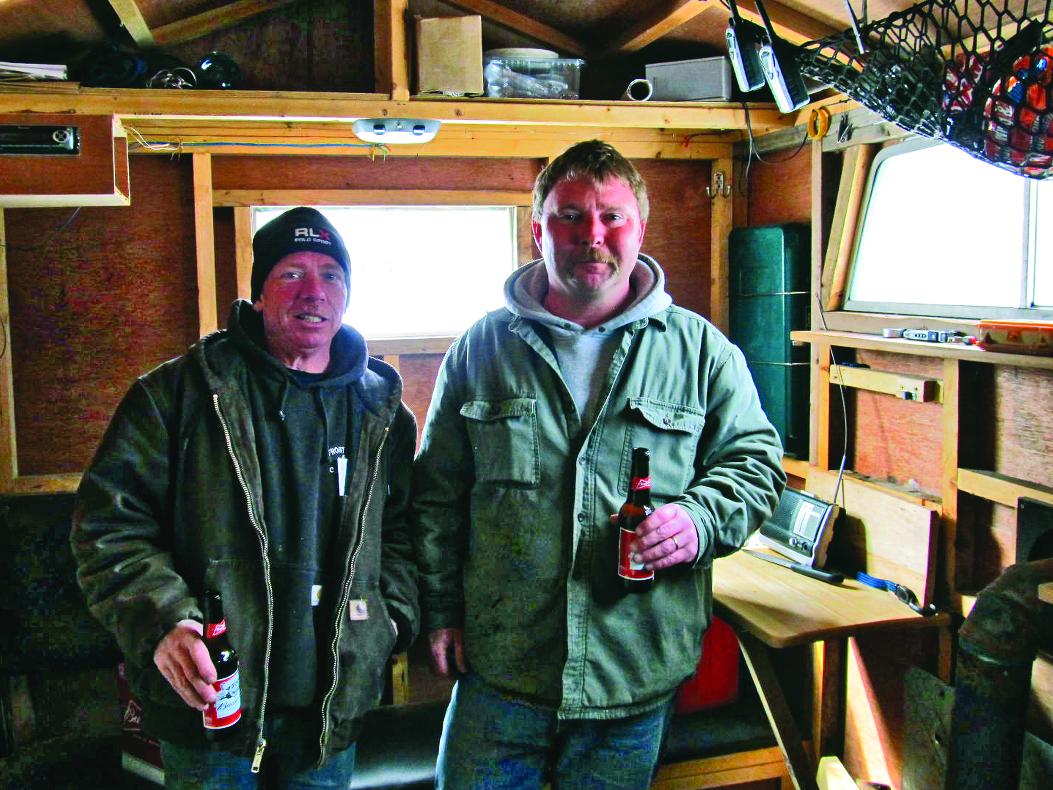 Scott Blackington, left, Will Sutton, right, kick back in Shackzilla on Norton Pond in Lincolnville. In addition to providing shelter from the cold, ice fishing shacks provide a temporary social hub in a frozen landscape. Shackzilla has a dart room and a place to play cards and do a little drinking. Photo by Kay Stephens

Inside, it looked exactly as you’d expect a guy’s ice shack to look: utilitarian, unadorned, and functional with lots of storage nooks and a wall-mounted beer opener. The racks of beer were kept on the ice—naturally. Shackzilla’s only decoration was a framed photo of a well-endowed squirrel trilling “Helloooo Ladies!” One had the feeling not many ladies actually got the privilege of seeing this, though.

Oh, but wait, the ladies say “Hell-oooo” back. Ann Pixley and her husband, Camden Harbormaster Steve Pixley, built a white-and-blue ice shack with an eyebrow roofline for Ann’s friends and their kids several years ago. It quickly became known as “The Panty Shanty” when it was unveiled during the U.S. National Toboggan Championships on Hosmer Pond in Camden.

Inside, instead of a propane heater, Ann had a cute woodstove topped with a vase of daffodils (when the stove was not in use). Instead of a dartboard and beer opener, she had hung photos of deer and winter scenes on her walls. You won’t find a rack of beer cooling in the snow outside her shack. Her table was set for wine, cheese, and crackers. Instead of bare plywood with a spot where a sharpie has recorded how many fish were caught in a season, she has covered her interior in flowing fabric. 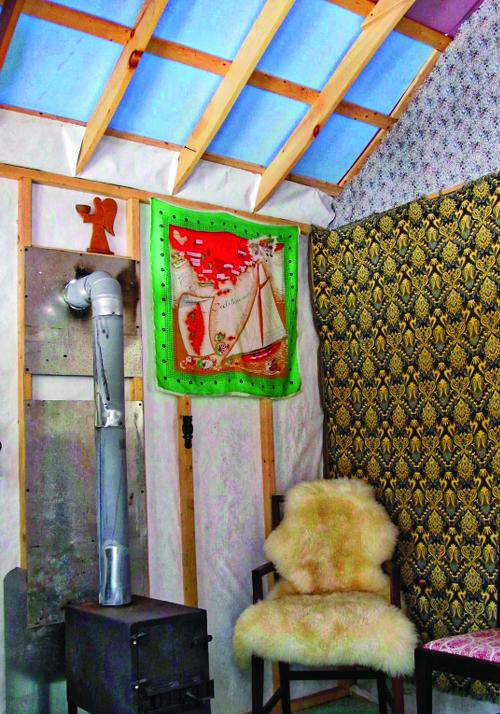 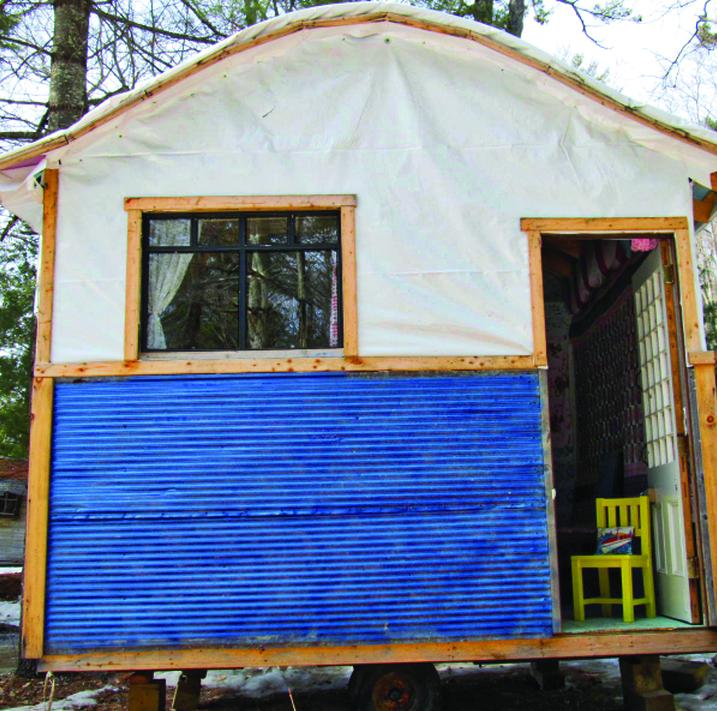 This ice shack for girls built for Camden Harbormaster Steve Pixley’s wife Ann is known as the “Panty Shanty.” The Panty Shanty’s furnishings are more feminine than most other shacks. Including colorful wall hangings, curtains, nice furniture and pillows. Photos by Kay Stephens

“Some of these wall hangings are antique tablecloths from my husband’s mom from their house growing up,” said Pixley. “Other things I got from Goodwill. I just love the colors and the feeling when I’m sitting in here—it’s very relaxing.” 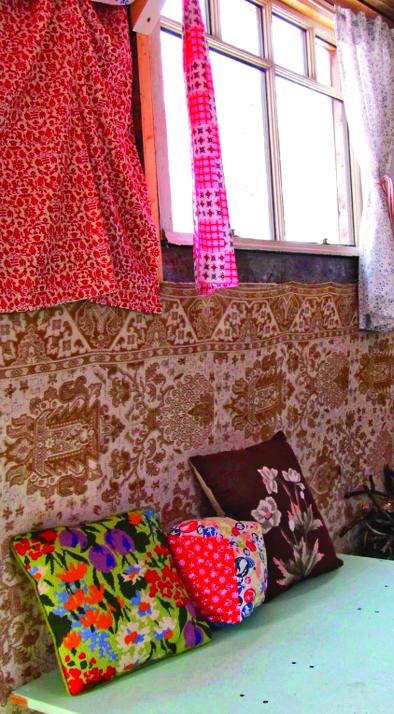 “I think you’ll find a lot of people with ice shacks who love the outdoors and just want a place to stay warm, so they can stay outside a little longer,” Ryan Brod said. “I see a lot of people gathering in their shacks to cook up what they might have harvested themselves like deer meat or moose meat. And maybe play a little cribbage or cards.”

Even though Hannes on Lake Sebago does do a little ice-fishing now and again, he treats his red shack like a second home. “Last night we went out to the shack and cooked roast beef,” he said. “Sometimes it’s hamburgers and hot dogs. We bring games and play Skip-Bo while the kids are outside ice-skating.”

Jennifer Ouellete, whose husband, Dan, built a camouflaged shack that sat on China Lake near Augusta, uses theirs about the same way. “That thing has been an ice shack, a deer blind, and a chicken shack,” she said. “And it’s a place for the kids to go in and warm up or play cards when they’re done ice-skating.”

John Worry loves to go winter camping and teach kids how to ice fish on China Lake. He built his shack big enough to sleep in, and installed a propane heater and two-inch insulation to keep the cold from coming up through the floor. “I have rubber mats we put on the floor and sleeping pads tucked into the rafters,” he said. “It can sleep three kids and two adults comfortably.”

A lot of shacks do have sleeping quarters, especially those belonging to hard-core fishermen. “I fish with a guy who has a really large shack with two bunk beds,” said Brod. “He brings the generator out and has a flat screen plasma TV and likes to play Nintendo Wii.”

Whether they’re small, spare, and bare as a doghouse, or decorated with animal bones or lace curtains with ribbon ties, Maine ice shacks have a little something for everyone. Even if that means playing New Super Mario Brothers in a lounge chair while the wind howls outside.

Kay Stephens is a regular contributor to Maine newspapers and magazines. She is also the author of two award-winning books, The Ghost Trap and Cyberslammed. 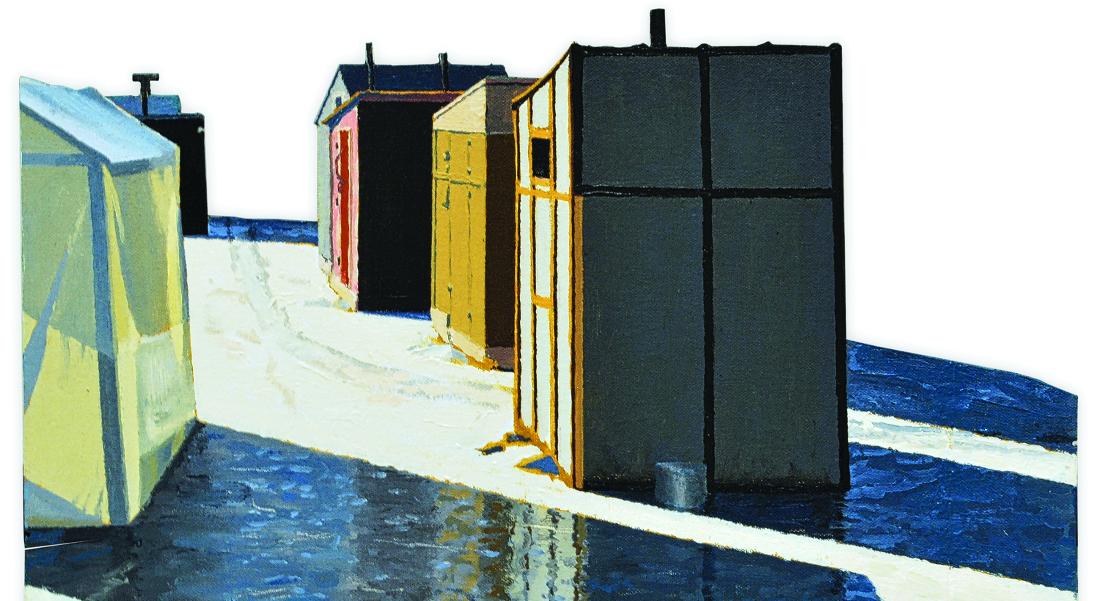 Cady has painted many versions. “I am attracted and amused by them,” he said. “They are so individual and so slapped together and so varied.”

Bray of Sangerville painted Fish House in 1980, using the buildings as metaphors for relationships between people around him at the time. Ironically, the painting was bought by a child psychiatrist who would ask his patients which shack they identified with as a way to get them talking. 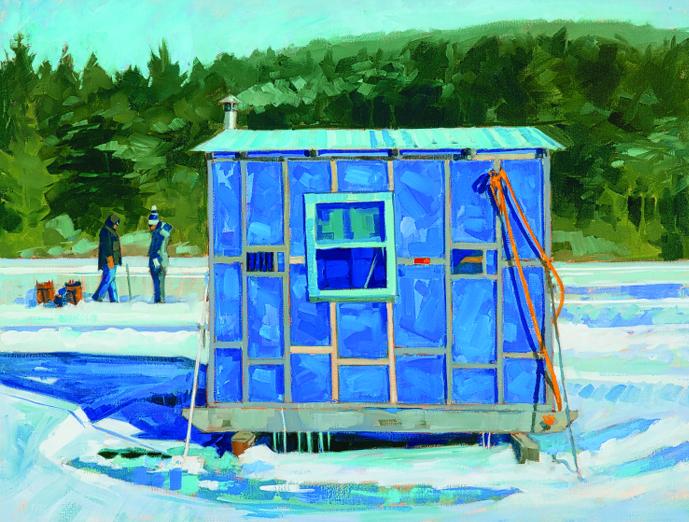 “It’s wonderful when a painting has a life beyond the living room,” Bray said.

The allure of ice shacks for Bray goes back to his childhood in Monson, Maine.

“We didn’t fish much, but we would go there and smoke cigarettes and read 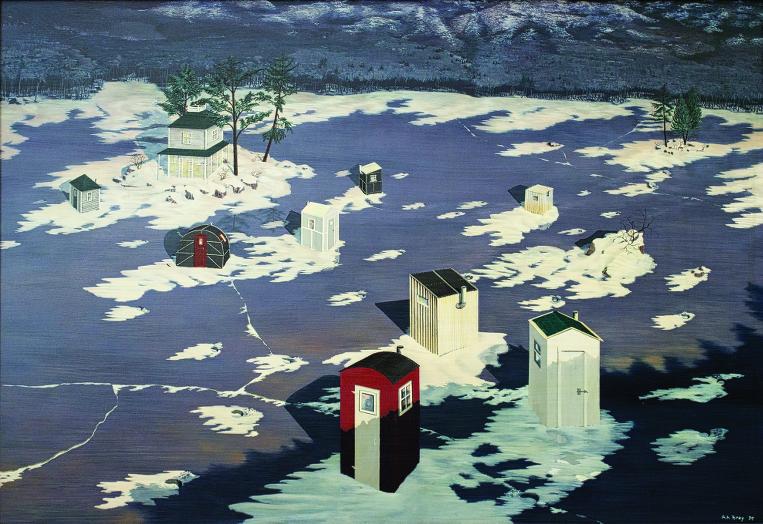 Fish House by Alan Bray, casein on panel, 32"x24", 1980, private collection magazines and do things we were not supposed to be doing,” he said.

When he saw a shack sided in wood strips and bright blue polytarp, Sullivan painter Philip Frey was reminded of abstract grid paintings by Piet Mondrian. “Ice fishing shacks are a portrait of the person who makes and uses them,” Frey said, sometimes humorous, colorful, meticulous or just plain practical structures. “I like this fact and that they stand out as a solitary sentinel or in temporary settlements on the frozen water.”