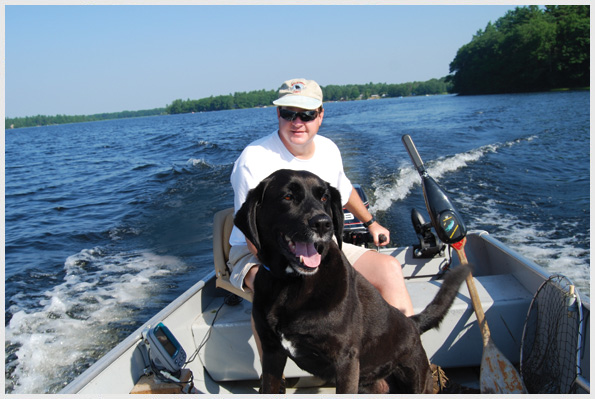 Known as Radar to his family and friends, this dog may hail from Baton Rouge, Louisiana, but he spends his happy time on Clary Lake, Jefferson, Maine. We say “on,” because Radar is a most unusual black Lab: he doesn’t much like being “in” the water. But he does like being in a boat, which is a good thing, because the crowd he hangs around with likes to do the same. “Radar has a wonderful story,” wrote Kate Grant Seba. “Our two daughters, Emily and Sophie, found Radar wandering our neighborhood on December 28, 2004. He was skin and bones and very skittish. They coaxed him to our house, where he happily dined on Cheerios until I could get to the store to buy dog food. After posting signs and putting an ad in the paper and receiving no response, we decided he was ours. We took him to the vet, only to find out that he had every worm possible. We decided to take the financial plunge and do what we could to save him. Now, 7 years later, he is a highly valued member of our family! He is the only black Lab (I would imagine) that doesn’t bark, and is the most loyal pet anyone could ask for. “I might mention that he now has a “brother,” a Chihuahua named Paco Taco, named after the great taco joint in the alley off Main Street in Damariscotta. Paco was found the same way, shivering and malnourished. We took him in one year ago September, and he and Radar bonded within a month or so. Our family is now complete.”

Share your Boatyard Dog’s story with our readers! Send a clear photo and pertinent details to: BYD, P.O. Box 566, Rockland, ME 04841, or click here and use our online contact form. The wild and crazy 10th Annual World Championship Boatyard Dog® Trials, presented by MBH&H and sponsored by Custom Float, The Bark, Loyal Biscuit, and Sea Bags, will be held on Sunday during the Maine Boats, Homes & Harbors Show, August 10-12, 2012. Click here for entry details. No pets are allowed on show grounds except the pre-selected trials participants (or bona fide service animals): please leave all your pets at home.)