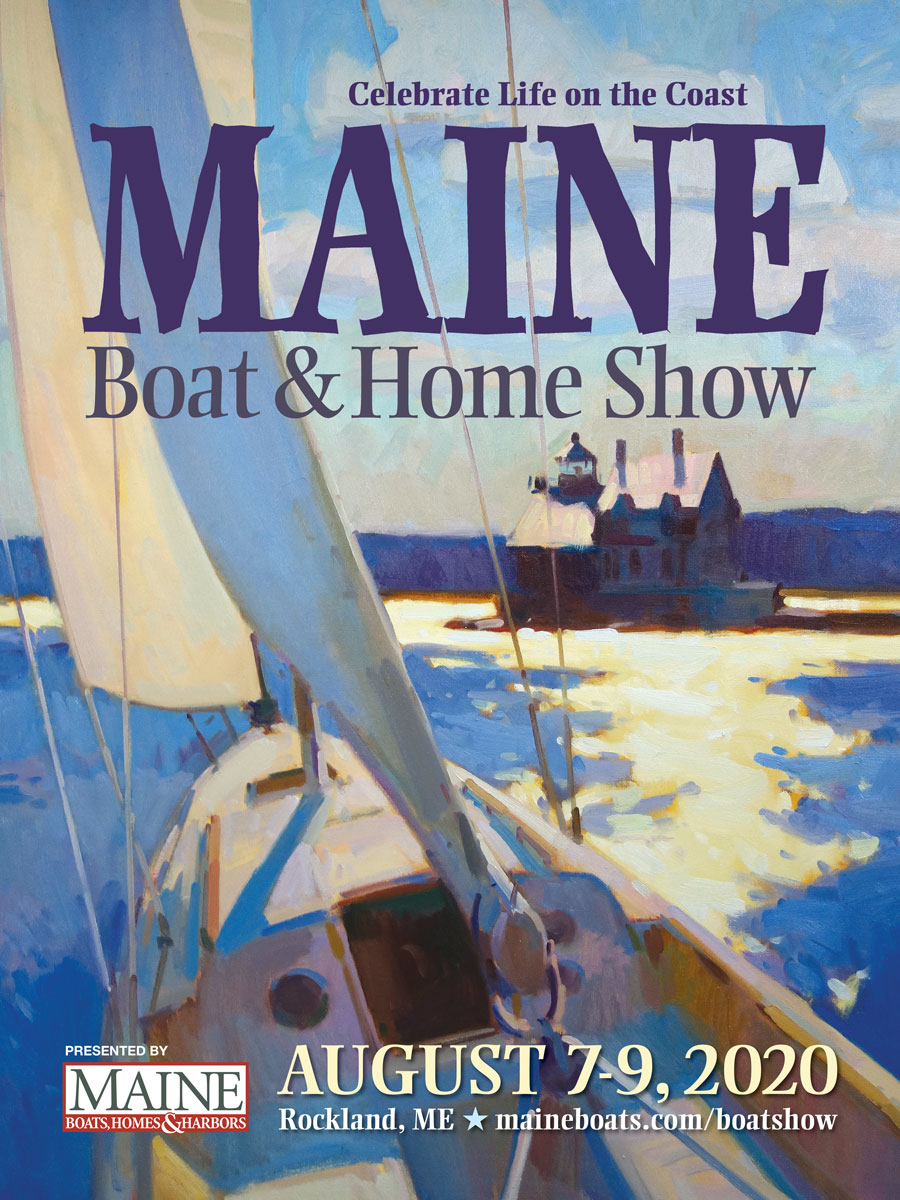 Maine artist Colin Page, who is known for his light-filled land and seascapes, has been chosen to paint the poster for the 2020 Maine Boat & Home Show.

Produced by Maine Boats, Homes & Harbors magazine, the Maine Boat & Home Show will take place this year from Aug. 7-9 on the waterfront in Rockland, Maine. This is the fourth year that the show poster has been designed by a Maine artist, MBH&H Publisher John K. Hanson Jr. said.

“Our show shines a spotlight on boats, art, marine products, furniture and other fine crafts, many of which are hand-made. It seemed appropriate that the poster for the show, like the items on display, should be a special work of art,” he said.

Previous show posters were designed by Anneli Skaar of Camden and Clayton Thompson, an illustrator and furniture maker.

Page was raised in Baltimore, Maryland, and studied painting at the Rhode Island School of Design and at the Cooper Union for the Advancement of Science and Art. He moved to Maine in 2002, drawn by the state’s rural landscape and thriving artistic community, and lives in Camden. His paintings are notable for his treatment of light and color in the landscape and in his depictions of the lives of his two daughters. His work has been featured in solo exhibitions and group shows nationally and abroad. 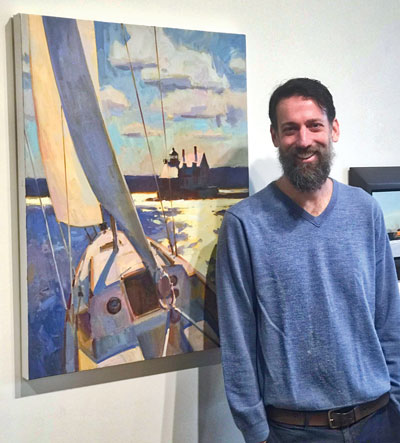 Page wrote an essay in Maine Boats, Homes & Harbors (July/August 2017) describing how his purchase of a Cape Dory 22, named Snow Squall, and subsequent efforts to teach himself to sail have influenced his work as a painter. Last summer he upgraded to a Sabre 28, named Eider.

The image for the show poster is a view from the tiller of Snow Squall on the fall day he sailed her to Rockland to be hauled out for the winter. “It was a beautiful, sun-filled day,” said Page. “I was happy to have light winds that slowed the trip down, dragging out the last sail of the season.” He chose to paint the view from the cockpit as a way to include the viewer on that last lovely sail of the summer. “I’m asking them to come along to be amazed by the light on the water, and the change of perspective that we get seeing Maine from the water. I’m reminding boaters of that magical time on the water when you don't want to return to shore.”

For more of Page’s explanation of his work, scroll to the bottom of this press release.

The show producers chose Page’s image because his work conveys such a strong sense of place, as well as the joy of being on the water. “We think the result is a wonderful scene that invites the viewer in," Hanson said.

In addition, Page’s light-filled style evokes impressionist painters of the 19th century, which is appropriate this year as the Maine Boat & Home Show will feature events and displays celebrating Maine’s 200th anniversary as a state.

Page opened his own gallery, Page Gallery, in Camden last year where he shows his own work as well as other work by artists working in Maine and elsewhere.

He also is represented by Greenhut Gallery in Portland, Anglin Smith Gallery in Charleston, SC, and Huse Skelly Gallery in Balboa Island, CA.

The Maine Boat & Home Show will take place Aug. 7-9 on the waterfront in Rockland. Admission is $15 for adults (good for the whole weekend), children under 13 get in free. For more information about the show and to buy tickets, go to: maineboats.com/boatshow.

The 18"x24" poster is available online for $10 plus S&H at https://maineboats.com/store. Copies will also be available for sale at the Maine Boats, Homes & Harbors kiosk during the event itself.

Artist Colin Page explains how his painting for the 2020 Maine Boat & Home Show poster came to be:

“Five years ago I bought Snow Squall, a 22' Cape Dory. She is a well-built, stable boat with a classic design—a perfect fit for a novice sailor like me. Friends had to go out with me the first few times to show me the ropes, although on a sailboat I should probably call them lines and sheets. By the end of the summer I felt comfortable going out solo, which remains one of the most empowering feelings for me on any boat.

Still, as much as I love a solo sail, it’s also great to bring friends out to share the experience of a strong wind, or porpoises following along, or dressing a bunch of kids up as pirates and yelling at other boaters. I made wooden swords and bought a pirate flag to make it all feel like a game to the kids, who were learning to be comfortable on a sailboat alongside me. We would chase down schooners full of tourists as they came and went from Camden Harbor. My 4-year-old would shout, “Give us your dollars!” The crew on the schooner Appledore would yell pirate jokes back at us, and occasionally shoot off its cannon when we went by. All I wanted to do was get out on the bay, even if just for an hour, and I did whatever I could to make it fun for my kids. We rarely made it past the Graves, let alone to the islands on the other side of the bay, but sailing taught me a love of the ocean, and the pleasures of moving with the aid of wind and water.

This painting is a view from the tiller of Snow Squall as I took her to Rockland to be hauled out for the winter. It was a beautiful, sun-filled day. I was happy to have light winds that slowed the trip down, dragging out the last sail of the season. Even the short sail from Camden to Rockland is an adventure for me, and I cherish every second. The vantage point of this painting is from the cockpit of the boat, looking out past the sails. The viewer is with me on the boat. I’m asking them to come along to be amazed by the light, and the change of perspective that we get seeing Maine from the water. I’m reminding boaters of that magical time on the water when you don’t want to return to shore.

Light and color are the focus of most of my paintings, and in this piece, I’m painting the feeling of a sail toward strong afternoon sun as glare bounces off the water, through crisp sea air.”  —Colin Page