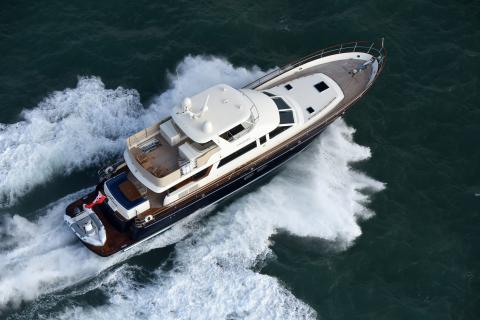 The Hinckley Company, which acquired Hunt Yachts in 2013, has unveiled two new expedition-ready yachts in the Hunt 76 and Hunt 63 Ocean Series. These new Ocean Series yachts have been drawn by the legendary Ray Hunt Design studio with a focus on offshore performance for customers looking to explore new destinations. The first of these go-anywhere yachts has been delivered to Europe and two others are currently in build.

“Our new Hunt 76 and Hunt 63 Ocean Series truly are the best performing cruising yachts in the world,” said Hinckley Company President Mike Arieta. “With speeds of 30 knots and the ability to handle conditions that would make other yachts shudder, this new generation of Hunt Ocean Series is for customers who want new experiences, to explore their world making rapid passages and embracing the offshore route to get there.

Both existing Hinckley and Hunt customers have placed orders for the Hunt Ocean Series. Customers interested in exploring new destinations have been the most excited about the new yachts, said Pete Saladino, The Hinckley Company’s chief marketing officer.

Both the Hunt 76 and 63 Ocean Series yachts are available for order now and will be built to customer specifications. Sea trials can be arraigned in both the US and in Europe.