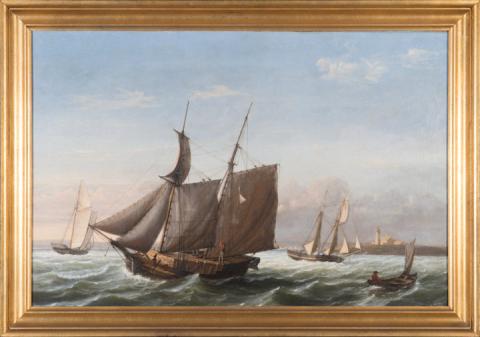 A painting by noted marine artist Fitz Henry Lane of a schooner carrying lumber from Maine to Massachusetts has been donated to the Penobscot Marine Museum in Searsport.

The work has been in the same family since it was painted in 1850. It was bought by Edward Dyer Peters (1785-1856) whose family began in the lumber business in Ellsworth before starting a lumber wholesale business in Boston. Dyer’s descendent was the late Ellen Guild Moot, whose estate donated the painting to the museum.

In the 18th century the lumber trade between Maine and Massachusetts was disorganized. Lumber went south on speculation fetching whatever the market paid when it arrived. Edward Dyer Peters changed this. Born in Blue Hill Maine (the son of John Peters, who by 1790 was Blue Hill’s most prosperous citizen) by 1800 he was a partner with his brother John in a lumber business in Ellsworth. Then, Ellsworth, built on the Union River, was a major lumber port logs were floated down the river from the woods and powering sawmills. To organize the trade, Ellsworth’s lumber merchants apparently sent Peters to Boston somewhere about 1811, where he established a lumber wholesale business, that maintained an inventory and sent orders back to Maine. The business prospered; in 1856 his estate apparently passed some $600,000 to his six surviving children, something like $60 million in todays dollars.

The Artist: Fitz Henry Lane (1804-1865) By 1850, Gloucester’s Fitz Henry Lane had become Massachusett's premier marine painter whose works were owned by merchants, shipowners and prominent citizens. His views of Boston Harbor, Gloucester, and Maine’s coast were eagerly sought. He vacationed in Castine, Maine, and traveled the coast by small boat in search of Maine scenes. He also painted on commission; many Bostonians had him create paintings of their ships. This painting, one of three bought by Peters, was likely such a commission, with Peters wanting a good painting of the modest lumber schooners of the time, the ships that made his living.

In this painting, the schooner is off what is probably Gloucester’s Eastern Point Light, bound for Boston. It looks like she has just tacked with her topsail still needing to be angled around to catch the fresh westerly wind. Lumber is piled high on her deck. The crew works the vessel from the top of the pile and the helmsman relies on a bow lookout to see forward. Also in the scene is a coasting schooner on the right leaving Gloucester, possibly with a load of dried cod for the West Indies. To the left is a fishing schooner bound east for the Grand Banks. To the lower right is a small spritsail rigged boat, likely being sailed by an inshore fisherman.

For the last 165 years or so the painting has been in the Peters family. Its donor wanted to share it with the people of Maine, where the family’s business began.

The painting is now on display at the Penobscot Marine Museum.