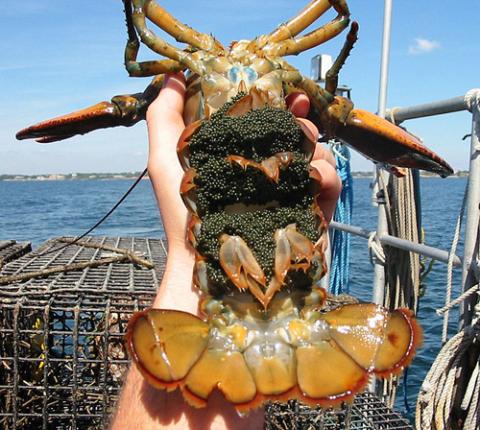 The Commissioner of the Maine Department of Marine Resources has suspended the lobster licenses of two men for removing the eggs from female lobsters. The violation is a Class D crime which, in addition to license suspension, is punishable by up to a year in jail and fines in excess of $1,000.

The licenses of Dexter Bray, Jr., 36 of Stonington and Philip Poland, 42 of Cushing have been suspended for 6 years as a result of separate investigations conducted earlier this year by Maine Marine Patrol, according to a news release from the agency.

The Bray investigation, led by Marine Patrol Officer Rustin Ames, resulted in charges of removing the eggs of two female lobsters for which Bray is facing fines of up to $1,600 in addition to as much as a year in prison and the license suspension.

The crime came to light by an anonymous complaint received in the spring by Officer Ames that Bray was “scrubbing” lobsters, which is the act of artificially removing eggs from the underside of a female lobster’s tail.

Officer Ames followed up on the complaint and began an investigation that involved Marine Patrol Specialist Sean Dow. The investigation revealed that Bray had landed and attempted to sell two egg-bearing female lobsters at a lobster co-op in Stonington.

The Poland investigation, led by Marine Patrol Officer Brandon Bezio, resulted in charges of removing eggs from three female lobsters for which he faces up to a year in prison and fines up to $1,900 in addition to his license suspension.

This investigation also began with an anonymous complaint received during the summer. Officer Bezio followed up on the complaint and, with the help of Marine Patrol Officer Matthew Wyman, and Specialist Corrie Robert, determined that Poland had scrubbed the eggs from three lobsters in his possession.

“Scrubbing lobsters is one of the most serious violations of marine resource laws we see,” said Marine Patrol Colonel Jon Cornish. “By removing eggs to make a short-term monetary gain, criminals deny future generations of fishermen the opportunity those eggs represent. Just as important, they undermine the work law abiding harvesters do every day to sustain this important resource.”

“I’m extremely proud of the thorough investigation conducted by the Officers involved in these cases,” said DMR Commissioner Patrick Keliher. “These are very difficult cases to make and the Officers did an outstanding job bring this behavior to and end.”

Bray, who fished in lobster Management Zone C, was notified after a length of suspension hearing on November 2, 2016 with Commissioner Keliher that his license would be suspended for six years, allowing him to regain his license on May 19, 2022.

Poland, who fished in Zone D, was notified after a length of suspension hearing on November 15, 2016 with Commissioner Keliher that his license would be suspended for six years, allowing him to regain his license on July 8, 2022.

Caption: If a female lobster carrying eggs is caught in a trap, lobstermen are required to use a v-notch tool or a sharp knife to remove a very small portion from the center of the tail’s flipper immediately to the right of the center flipper. The lobster is then tossed back into the ocean, with the v-notch remaining evident through the next few molts, so the female can reproduce several more times.