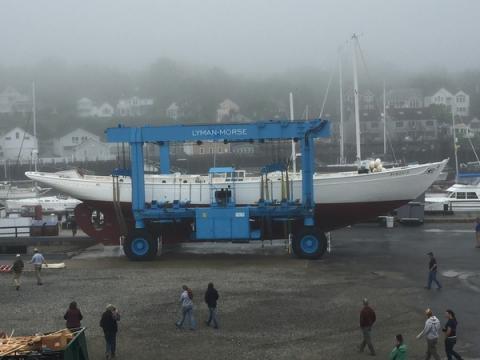 The famed Maine-built Arctic schooner BOWDOIN left the shadows of the boat shed at Lyman-Morse in Camden, Maine on June 6, 2016, and embarked on the next phase of its long and well-traveled career.

Designed by William Hand, and built in 1921 at the Hodgdon yard in East Boothbay, BOWDOIN logged more than two dozen trips to the far North under former skipper and renowned explorer Admiral Donald B. MacMillan. The 88' x 21' boat was built extra stout for duty in the Arctic's heavy seas and relentless ice, with double framing, double planking, an external layer of Brazilian greenheart "ice armor," and a big steel shoe on the prow. It features a distinctive rounded hull profile that helps it pop up unscathed if trapped in the ice.

After its time with the Admiral, the boat passed through a number of subsequent lives — a World War II tour of duty establishing airbases in Greenland, and then stages as a training and/or museum vessel. During these times, the ice armor and other original features disappeared, giving way to the realities of maintaining a big old wooden schooner on slim budgets. Maine Maritime Academy acquired the boat in the mid-1980s, and after numerous additional voyages to the North, brought it to Lyman-Morse at Wayfarer for a long-needed major refit.

At first, the work list focused on replacing the main decks. Not surprisingly for a well-used elderly wooden boat, disassembly revealed much additional needed work. Crews removed and preserved the original interior, then attacked rotted frames, punky planking, and deteriorated stanchions. The new frames were of 3" white oak. Stanchions were of black locust, almost metallic in its toughness. The 3" white-pine decking came from a plantation in Vermont that had been carefully tended by generations of the same family.

There was also a good bit of systems upgrading — electrical, plumbing, and the like--to bring BOWDOIN up to snuff for a renewed career of sail training at MMA. The original interior went back in, and she was more or less ready to go.

Lead builder on the project was Andros Kypragoras, a Greek Cypriot. How did a boatbuilder from an ancient island in the eastern Med come to be working on an Arctic schooner, you might ask. Well, Kypragoras is an MMA alumnus, and has headed up several projects on the BOWDOIN over the years, minor jobs and big ones, like replacing the mainmast.

Launch day didn't quite bring your normal smash-the-bottle-and-push-boat-overboard routine. Since the schooner had spent 9 months on the hard, it was expected that seams would have opened up and would likely leak copiously. So the L-M crew dunked BOWDOIN gradually from slings off the overhead lift, to let her leak risk-free until the swelling process started to diminish the work for the pumps. Of course, there were a couple of unexpected moments with other leaky seams. As one crew member hollered, "Where's Andros?" another replied, "Where do you think, he's down in the bilge!"

After a few hours, they had gotten things well in hand, and up went the signal flags, BOOM! went the signal canons, and BOWDOIN eased out of the launch slip and off on the next phase of its long and adventurous career.

The vessel was to remain at Lyman-Morse for another week or so for final buttoning-up and engine fettling, then head back to MMA at Castine for re-rigging and her home for the foreseeable future. By Dave Getchell