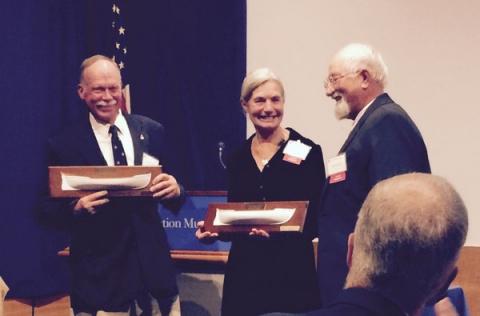 The Maine Windjammer Association is proud to announce that this year, the USS Constitution Museum – an interpretive center for the US Navy's oldest active commissioned vessel – has bestowed its annual Don Turner Award on Captains John Foss of the American Eagle and Linda Lee and Doug Lee of the Heritage. All three captains, whose vessels are based in Rockland, Maine, are longtime members of the Maine Windjammer Association.

The award recognizes people and organizations that preserve important vessels and have made significant contributions to the knowledge and understanding of ship design and construction.

For forty years, these captains of the Maine Windjammer Association have devoted their careers to keeping traditions alive and preserving history by providing their guests with an educational experience and direct connection to this nation's maritime heritage. Five of the Maine windjammers are National Historic landmarks and all of the windjammers are sailing vessels that rely on wind and tide and determine their itinerary by the weather of the day.

"We've been sailing and maintaining working vessels for over 40 years," says Captain John Foss of the schooner American Eagle. "It's always nice to be recognized and for the entire fleet to be recognized for historic preservation. It's important to underline that we're interested in maintaining these forever. We're not going to go out and get a new one."

Says Captain Linda Lee of the Heritage, "It was a pleasure to go aboard the USS Constitution to see the work that had been done. We had been aboard her in the 90s and actually met Don Turner. People in charge of preserving the Constitution had asked about a dozen different entities who knew about maritime history and preservation to give suggestions about how best to restore her. In addition to some structural suggestions, we encouraged them to put a few sails on her so people would see what she would have looked like – how powerful, majestic and awe-inspiring a square-rigged vessel like that could be. They did and sailed her around Massachusetts Bay one day in July. It was beautiful to see."

Captain Foss noted that it's significant that the award for maritime preservation has been given to people working in the private sector. "It's hard to understand what a vessel was intended to do if it's enshrined somewhere. Of course that's important and good for relics and icons, but not for tools of industry like sailing vessels. We get to sail our vessels and so have a deep understanding of them which we can pass on to the next generation."

Making historic vessels relevant to today's public is a passion that has driven all three captains. Having built, restored and re-built a number of historic vessels, Captains Foss and the Lees have not only spent their careers owning and operating windjammers, they also own and operate the North End Shipyard in Rockland, Maine. Says Captain Doug Lee, "We established the North End Shipyard in 1973 to help preserve Maine's historic schooner fleet, traditional shipbuilding skills, and our ongoing pursuit of maritime history."

For more information about the historic vessels belonging to the Maine Windjammer Association, visit www.sailmainecoast.com.

Oldest Friendship Sloop to be launched at Museum